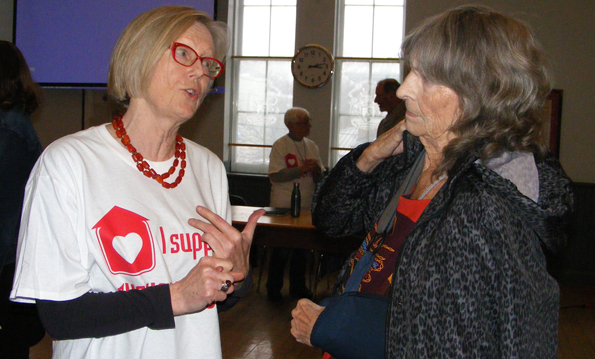 Hall call - Picton Town Hall Working Group member Sarah Moran (left) chatted with Myrna Mather after an open house held on Sunday to update the public on the progress of the group. (Terry McNamee/For The Gazette)

It’s time for people to step up and help in order to make the creative vision for Picton’s historic town hall become a reality, and that help is needed now.

That was the core message of members of the Save Picton Town Hall Working Group’s public meeting held at the facility on Sunday, April 14.

County council has approved a proposal to turn the hall into a community space that will cater to the needs of local citizens as a place to hold meetings, classes, the arts, special events and much more, including an outdoor farmers’ market. The hall already hosts a variety of regular events, including duplicate bridge, dance classes, yoga classes and rehearsals for the local pipe band. Many more are planned.

“We’re looking for people to come on the board of management,” said working group member and former councillor Sarah Moran. “They can contact us at the web site, savepictontownhall.ca.”

Moran said the future board will be in charge of the renovations needed to make this into a true multi-use community building. Much of the work that needs to be done is in the basement, which is currently used for storage. She said the hall will be part of a downtown “heritage hub” of historically important cultural sites which includes Picton’s Carnegie Library, the Regent Theatre, The Victory naval museum and archives and two other buildings, the Armoury and the Royal Hotel, which are currently undergoing restoration. All renovations at the hall will be in keeping with the building’s historical designation.

Moran said the key to success is to have the hall pay for itself while keeping rental rates reasonable, something she believes is absolutely doable.

Working group member and former councillor Bev Campbell said there is a deadline to be met. The township and the group must work together to create a management board by the end of May.

Once council approves the appointment of the board members, the board will have 18 months to secure funding and make any improvements and renovations needed for the building’s anticipated uses, which must include at least one “anchor” tenant to lease space on the lower floor.

Moran stressed that the core users, some of whom have been using this space for as long as 30 years, will still be included but with planned renovations, the hall’s used can be expanded to include many other groups and events. Already, users come from across the county, not just from Picton, and that will continue.

Campbell said the renovations are expected to cost approximately $350,000, of which $50,000 is for the upstairs hall and the rest for the lower floor. Estimated operating costs of just over $5-,000 will be covered by user fees and tenant leases.

“We’re hoping to double the actual use of the (upstairs) hall,” she said, noting that since the County only raises $5,000 annually toward the operating costs of the hall, this proposal will save the County a lot of money.

Moran and Campbell said the new board will be assisted and advised by volunteer support groups consisting of people with a wide variety of skills and abilities, and people are being sought for those groups, too. But the main emphasis right now is finding people to serve on the board of management, which must be submitted to council before its May 30 meeting. Council will approve appointments at the June 13 committee-of-the-whole meeting and that will be ratified at the June 25 council meeting.

Working group member Leslie Smail-Persaud said grant money will be sought from a variety of sources, including funding for heritage buildings, for the arts and so on. Moran added that the Farmers’ Market group, which is already in place, will be making its own applications for agricultural grants.

“It’s nice to have their support today,” Smail-Persaud said.

The working group will be holding fundraisers in the coming months, and those at the meeting learned that Creative Rural Minds is kicking things off next month with Adventure PEC, a County-wide scavenger hunt. Organizer Krista Dalby said the cost is $100 for each team of four people, and the winning team will receive $500 to give to the charity or non-profit of their choice.

“My goal is to give $1,000 off the top to the Picton Town Hall,” she said. This event takes place on Saturday, May 11, and will be followed by an after party at the Town Hall from 4 to 9 p.m. More information about this event can be found online at www.visitpec.ca/pt_events/adventure-pec-2. To read more about the proposal for the Town Hall, go to https://savepictontownhall.ca and check on Facebook at https://www.facebook.com/SavePictonTownHall.