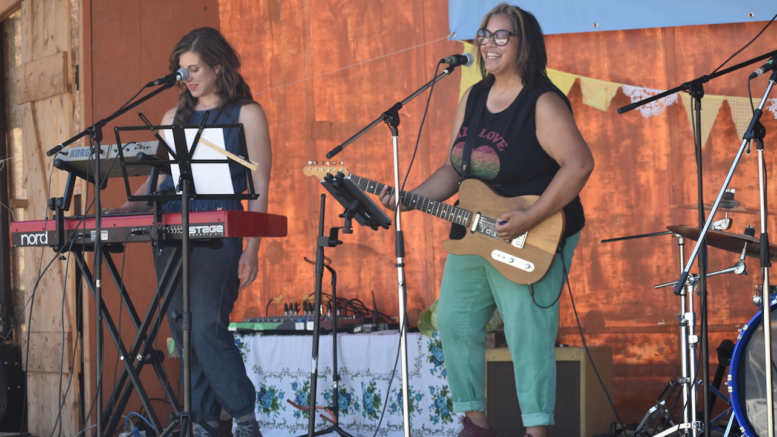 SOMETHING TO SING ABOUT - That's What She Said performed two sets at the 3rd Annual Fermentation Festival at the Crystal Palace on Saturday. (Sarah Williams/Gazette Staff)

This past Saturday, over 1,000 people followed their gut to the Crystal Palace for the 3rd Annual Fermentation Festival.

Like many back-to-the land techniques, the art of fermentation is currently experiencing a revival, as the over 1,000 guests at Saturday’s event proved.

The event has been organized each year by husband and wife duo  Jenna Empey and Alex Currie who also run Pyramid Ferments, a local fermented food and beverage operation.

Speaking at the festival was renowned fermentation revivalist Sandor Katz. He is well known for several of his books among which are The Art of Fermentation, Wild Fermentation and The Revolution Will Not Be Microwaved.

Fermented foods, being described on Katz’ website www.wildfermentatoin.com as “a way of incorporating the wild into your body” come in the most obvious forms of sauerkraut, kimchi or perhaps kombucha.

Many may be surprised to learn that much of what North Americans eat is actually fermented from coffee to wine.

“You’d be hard pressed to eat a diet without fermented foods,” said Katz. “Almost every individual in every part of the world eats and drinks something fermented everyday. If you are in North America, most people start their day with a coffee. If you have bread, or cheese, cured meats, condiments-those are usually fermented. Chocolate is fermented, as is vanilla. It would be hard to live your life without eating these things.”

Katz described the evolution of his interest in ferments as being a “slow build”.

“As a kid I loved pickles so I’ve always been drawn to the taste of fermented foods even before I knew the word fermentation. I spent a couple years in my mid-twenties following a macrobiotic diet which places an emphasis on eating some pickle or sauerkraut or other live fermented food as a digestive stimulant,” Katz said.

After Katz moved from his hometown of New York City he settled in rural Tennessee where he began to garden.

“I was such a naive city kid,” said Katz, “It never occurred to me that, in the garden, all the cabbages would be ready at the same time. When faced with that obvious reality of agriculture, I decided to make sauerkraut. After finding a recipe in The Joy of Cooking, I learned how to make it…that was sort of the gateway.” 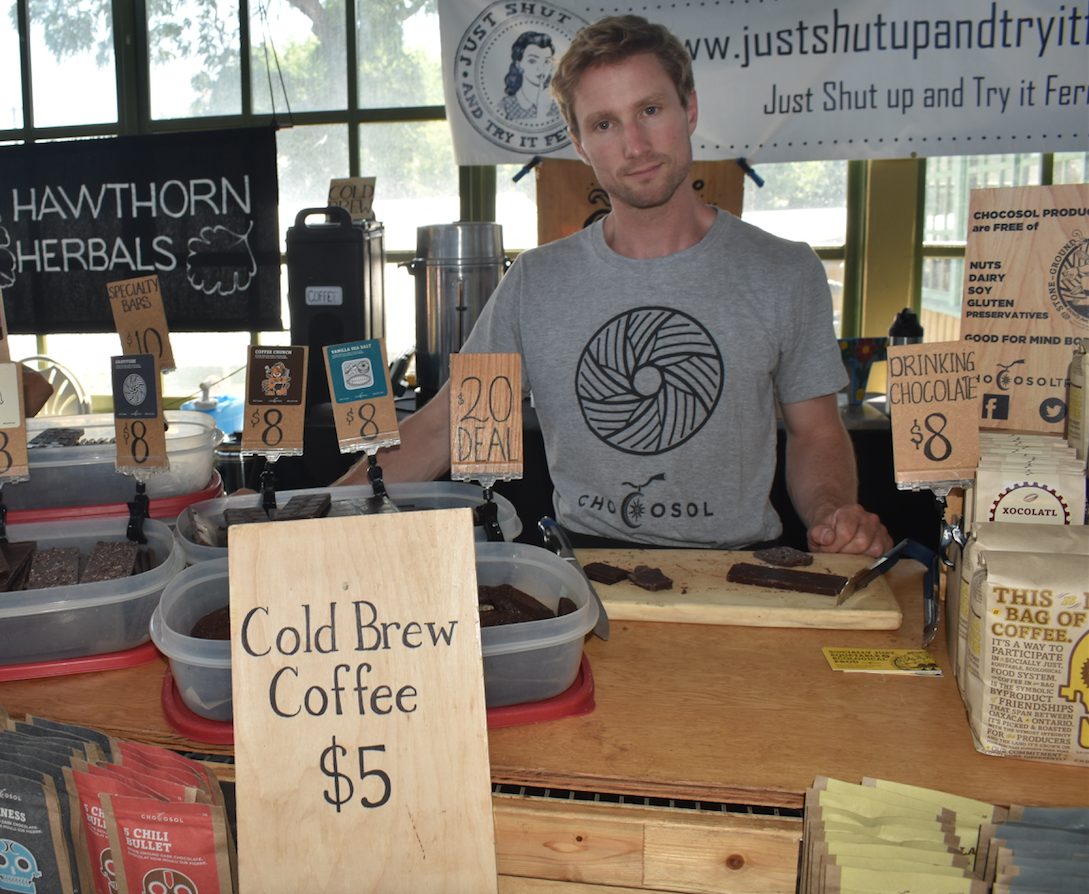 FULL OF SOUL – Byron Koss of Chocosol showcases some of his wares. (Sarah Williams/Gazette Staff)

Katz emphasizes this experience made him realize making fermented foods could be straightforward, easy and delicious.

“For those of us who grew up in the 20th century, we never heard a nice word about bacteria. We heard about how dangerous they were and how we should avoid them. And, we had an arsenal of chemicals we could use to kill them,” stated Katz.“Really, since the dawn of the new millennium, science has been telling a more nuanced story about bacteria, recognizing that we need bacteria in order to survive or even thrive and that bacteria are essential to the functionality of our bodies many different systems, not only our immune system but our brain chemistry along with many other aspects of our well-being,” he enthused.

The revival of fermentation comes at a time when the general public have become increasingly removed from their food.

In North America, the post-war era ushered in a period of convenience-one in which grocery stores are never far away, meanwhile the making of one’s own food, whether at home or on the community level, quickly became less common.

“For my mother and grandmother’s generation this was liberation. But among my generation and younger, there’s a critique of that. While convenience is wonderful, people are realizing the quality of the food system is diminished. We’re seeing epidemics of all these food and nutrient related diseases. We’re also seeing a lot of environmental destruction related to the way food is produced,” added Katz, explaining some of what has provoked the fermentation movement.

He is adamant however times are changing as people have started asking important questions about their food.

“How is this made? Where does it come from? Once people start asking these questions, fermentation is part of the answer,” Kats stated.

Byron Koss was another purveyor of fermented foods who attended this year’s event. He specializes in chocolate and standing behind his booth, ChocoSol Traders he took a moment to speak with the Gazette.

“Cacao itself is a fermented food,” said Koss. “Once you harvest the cacao pods and open them up, the beans are encased in a free pulp that is fermented for approximately one week in banana leaves. One that is done, it’s sun dried and exported.”

ChocoSol imports cacao from countries like Mexico, Equador and The Dominican Republic. Their products are made using traditional methods.

“It’s all stone-ground. We do temper it but the first process involves stone grinding which preserves a lot of the nutrients within the cacao. Cacao itself is known as a super-food. It’s a very rich source of magnesium, iron and antioxidants,” Koss enthused.

Among the many attendees was Tamara Segal who has a herbal business Hawthorn Herbals here in the County.

Segal works with plant medicines from plants that have been harvested in the area.

“I have a whole array of herbs and health suggestions, but I also like to really educate and empower people on taking responsibility for their own health and connecting more with their Earth. I believe doing so is part of becoming healthier,” said Segal.

Though not fermented themselves, Segal points out that bitter herbs have a long tradition of being used as a digestive aid “to support all those good enzymes we’re trying to get from fermented foods”

The heat of the day was no match for the thirst quenching Kombucha and beer available at the event.

Many enjoyed the musical stylings of the Sophiasburgh All Stars as well as That’s What She Said playing from the main stage outside between attending workshops or demos, from baking with sourdough to making sauerkraut and talks that included the various fermentation processes that go into making County wines.

Once the dust had settled on the storied grounds of the Crystal Palace for yet another year, Empey described the third edition of the Annual Fermentation Festival as being “our best year yet,” adding organizers already have ideas and tweaks for the next round of fermentation fun.