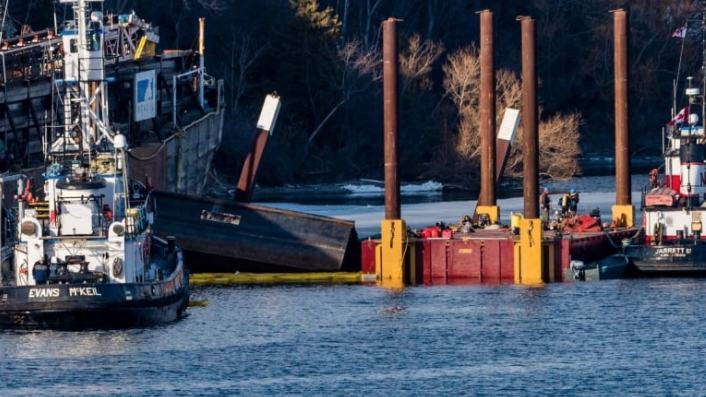 To those that lived through it and were tasked with living under a boil water advisory for weeks afterwards,  many will remember when the Pitts Carillon barge sank in Picton Bay in late March, 2017.

The vessel, owned by Galcon Marine, contained a mix of hydraulic and diesel fluids. Though some will debate the environmental effects of the submerged barge, now lifted from the waters and long gone from Picton Bay, there are few who would refute the financial implications of environmental recovery.

The spill of approximately 50 Litres of an “undetermined substance” resulted in a water emergency and boil water advisory that would last until April 11th.

Historically, not all boats float, and the Ship-source Oil Pollution Fund is a federally funded initiative intended to help victims of oil spills.

“For 30 years, the Fund has been mandated to compensate victims of oil pollution damage (including costs incurred for preventive measures) caused by ships and then take action to recover the costs from the polluters or other responsible parties,” according to the SOPF website as seen here: http://sopf.gc.ca/.

The types of damages the fund will help to recover are: clean-up costs, fisheries losses, preventative measures, tourism losses, loss of subsistence living, property damage, economic loss and costs for reinstatement of the environment.

In consideration of this, the County had submitted a request to SOPF for $597, 396 for costs, expenses and interest.

Lynn Pickering of 99.3 County FM recently spoke with Ryan Gauvin, legal counsel to SOPF. According to the interview which was broadcast on the airwaves of the community radio station, The County of Prince Edward  was offered $380,000 plus interest, totalling $394,000 in July 2019. They have 60 days to accept or appeal the offer. If they accept the offer, the Administrator will pay the amount offered plus interest. If they choose to appeal the offer, they will have to proceed in the Federal Court.

Kerr stated that the offer will be presented to council for review in the near future.

“We compensate two major items including damage caused by oil pollution, from damage to property and loss of revenue. We also compensate costs associated with preventive measures to minimize oil spills in Canadian waters,” stated Gauvin in his interview with Pickering.

In the aforementioned interview, Pickering stated that the Coast Guard submitted a claim in relation to the sinking of the Pitts Carillon for $77, 347.18, but the amount paid by the SOPF was less than half that claim.

“The Canadian Coast Guard has a very broad mandate and the administrator has a very narrow mandate. Our mandate here is to compensate strictly the measures taken in response to an oil pollution incident,” said Gauvin.

The SOPF file remains open until council decides whether or not they want to accept their offer.

In the meantime, Gauvin declined to comment on the nature of the discrepancy between the amount council asked for from SOPF and the amount offered.