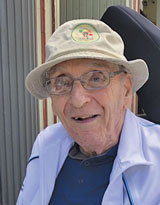 David Allan McIntosh
Dave passed away on December 7, 2019 at the John M. Parrott Centre at the age of 91. While tinged with sadness we are so grateful he will be with his beloved wife of 64 years, Lee, for Christmas. Survived by his daughter Susan (Steve) of Picton, son Peter (Sandra) of Ottawa and much loved granddaughter Ashton Kobler (Simon) of Sydney, Australia. He will be sadly missed by his many nieces and nephews and friends, particularly his dear friend Bill Ryan. Dave was predeceased by his parents Annie and Arthur, sisters Marie Brisbin (Lorne) and Jean Burns (Bob), brother Art (Joan) and sister-in-law Stella Spindler. The family wish to express their unabiding appreciation to the staff at the John M. Parrott Centre, particularly those on Spring Meadow who cared for him as their own. The family would appreciate donations to Grace United Church (Napanee-Deseronto Pastoral Charge) or resident programming at the John M. Parrott Centre. Arrangements entrusted to Wartman Funeral Home – Napanee Chapel. Online condolences www.wartmanfuneralhomes.com