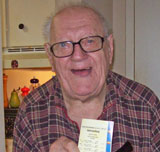 It is with much sadness that we announce the passing of our most dearest friend and uncle, Joe Shannon, who passed away peacefully in his sleep at Hamilton General Hospital on June 10th, 2020. He was in his 89th year and every one of those years were spent laughing with old friends and new friends. His first 80 years were spent in Picton where he was known as a joyful, hardworking man who generously donated his spare time to a variety of causes. For a couple of decades there were many people helper organizations that solicited his ticket selling skills to raise money. Those sales raised thousands of dollars for good causes. He was also a long time member of the United Church and many Sunday mornings he stood at the front doors to welcome those who came to the services of the day. He sat in the cold every spring in front of the local grocery store to sell daffodils for the Cancer Society and he did it willingly and happily. He enjoyed the Bingo games at the Elk’s Hall especially when he managed to win a game or two. He was unique and he was the spirit of the town that he loved. Uncle Joe will be missed by nephew Dennis who accompanied him to numerous sporting events at Maple Leaf Gardens and Ivor Wynne Stadium in days gone by. They enjoyed bus trips to Ottawa, Washington DC, Montreal and other places. He moved to Hamilton in 2012 where he shared his final years with nephew Gary and his wife Sandy. He enjoyed the city almost as much as he enjoyed Picton but in reality he simply enjoyed meeting people. He lived a full life and will be missed by all who knew him including great nephew Jeremy, wife Anna and children Avery and Austin. Cremation has taken place and interment will take place at Cherry Valley Cemetery on Monday June 22 at 11 am. The Reverend Audrey Whitney officiating. Donations in Joe’s memory can be directed to whichever charity you prefer. A celebration of life will occur in Hamilton at a later date. Arrangements entrusted to Arrangements entrusted to Hicks Funeral Home, 2 Centre Street, Picton. 613-476-5571 www.hicksfuneralhome.ca