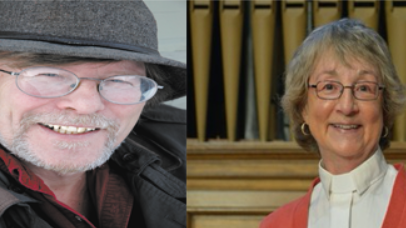 The Rotary Club of Picton bestowed Paul Harris Fellowship awards upon a pair of County residents at its virtual meeting on Tuesday.

The Paul Harris Fellow award, named after the movement’s founder, is Rotary International’s highest honour and is typically given to non-Rotarians. The laurel has been given to people from all around the world  and is presented to someone who exemplifies Rotary’s motto of ‘Service above Self’. Previous honourees include U.S. President Jimmy Carter and the late Mother Teresa.

In congratulating the Club’s latest Harris Fellow award winners, Past President Bob Bird said Campbell and Langlois are great examples of heroes that walk through our community, help others and serve to better Prince Edward County.

“Without these people, I don’t know how our community would hold itself together. The Rotary Club of Picton is happy to honour Fran and Steve today and recognize these valuable members of Prince Edward County,” Bird said.

In speaking of the contributions Langlois has made, club member Jim McGregor said “this individual is a person who is one of this Community’s unsung heroes.”

A St. Mary Magdalene Church member, Langlois moved her family to Prince Edward County from St John’s, Newfoundland in 1984  and took a position as a banker.  Earning a reputation in the congregation and elsewhere of being a very caring person, Langlois is ordained as a vocational deacon. The  Prince Edward County Anglican Ministry to Seniors -which consists of members of the three local Anglican Parishes- provide monthly communion services, visits, and support to seniors in facilities across the County, regardless of religious affiliation.

“Fran is also actively involved in the life of the parish, and assists most Sundays if she is not called away to other responsibilities,” McGregor said. “In normal times, she leads a wonderful ministry team which is experienced, compassionate and dedicated to some of the most vulnerable in our community.”

Services are offered monthly in Long Term Care homes in The County. In pre COVID days and, hopefully after returning to more normal times, annually in May, under her direction, all of the residents of these retirement/nursing homes, are brought together for a wonderful service and luncheon at the Salvation Army facility (for whose generous hospitality they are very grateful). It takes a lot of organizing, arranging transportation, food, actual servers and people to assist the attendees. Also, at Christmas they have special services at the nursing and retirement homes, that are followed with cake and ice cream for the residents.

McGregor noted Langlois’s efforts are not restricted to the Ministry.

“She makes herself available to other seniors who may require some assistance. For example, she recently helped a lady who realized that she could no longer stay alone in her own home. Fran was able to find a Senior’s residence that had a vacancy and, with help from neighbours and a long time friend, got her settled in. Another lady, who also concluded that, although she is a very independent and proud person, she needed to be in a place that would provide the support she needed. She has no close Family and has just moved from PECMH to H.J. McFarland Memorial Home,” the club member said. “While at the Hospital waiting for a vacancy to occur at a retirement home, Fran visited when allowed and ensured that she had the necessities and some extras, like crossword or other puzzles.”

“To sum up, Fran is a compassionate, caring, empathetic and kindhearted individual who is one of our Community’s unsung heroes. She is dedicated to helping those in our Community who are the most vulnerable. The presentation of this Paul Harris Fellow Award is an acknowledgement of Fran’s living Rotary’s Motto, Service Above Self,” McGregor added.

Langlois said it was a great honour to receive the Harris Fellow award and was happy to be included within a prestigious group of previous winners.

She explained she’s always had a place in my heart for seniors and enjoys the wonderful stories about Prince Edward County they have to share.

“We can learn so much history from them and and I suggest once you are able that everyone takes the opportunity to make connections with this part of our community. Your life will be so much richer for it,” Langlois said.

Campbell, a proud Prince Edward County native, was described a “journalism giant” and “integral to the community for decades” by club member Rob Leek.

“Steve spent a year at Queens in engineering, but decided, like Bill Gates and Steve Jobs, he had something better to do, and came home to Picton to try his hand at being a reporter for The Gazette.  He subsequently chose to strike out on his own, to open a print shop and publish a magazine.  That was, and still is, County Magazine, which has been in continuous publication since 1976,” Leek said.

Right from the start, the original black and white offerings set out to amuse and entertain while featuring local people and businesses and interests and obsessions.

“In a flyer produced before the magazine’s launch, Steve described it as ‘Published quarterly, the magazine will appeal to residents and visitors alike. Stories on every aspect of County life — farming, craftsmen, local attractions and area activities — will be presented for the first time in this format. The writers will also be re-examining the past — the people and events that played a vital role in the heritage of the Quinte area.’  Creative members of the community . . . artists and artisans, craft people and musicians, story tellers and authors, antique restorers and woodworkers . . . and at least one member of the arts community in every issue, were featured,” Leek said.  “County Magazine has told stories of lighthouse keepers and upholsterers, rum runners and social mavens, farmers and politicians, historical figures and soldiers, rascals and pillars of our community.”

Campbell started and continues to host the Quarter Moon Café in Bloomfield, where singers and musicians entertain full house audiences each summer.  An accomplished guitarist in his own right, and is able to sing just about every Beatles song ever produced.  The author also helped launch and promote Taste The County, Maple in the County, the Arts Trail, and The Studio Tour as well as playing key roles in the Bloomfield & Area Business Association.

“Steve is an avid advocate and promotor of The County.  In every thing that he has done for his entire working life, he has captured the essence of the culture of this special place in Ontario, and shared the uniqueness of our home like no other.  He has given a voice to many in The County, has worked tirelessly to chronicle history, and has done so with wit, creativity, and fair-mindedness,” Leek said.

Campbell thanked the club for the honour and admitted it was embarrassing for him to sit through a list of accolades however, had it not been about him, “I would have thought ‘Wow, what a great guy!'”

“It’s such a great honour to be recognized by this group,” Campbell said. “Doing what I do happens because of the support from my family and my friends. Luckily, I’ve been able to find joy in my work and that leads to joy in your life.”

Campbell also thanked the many volunteer contributors to County Magazine that have allowed the periodical to cover and explore a broad range of topics and issues in Prince Edward County.