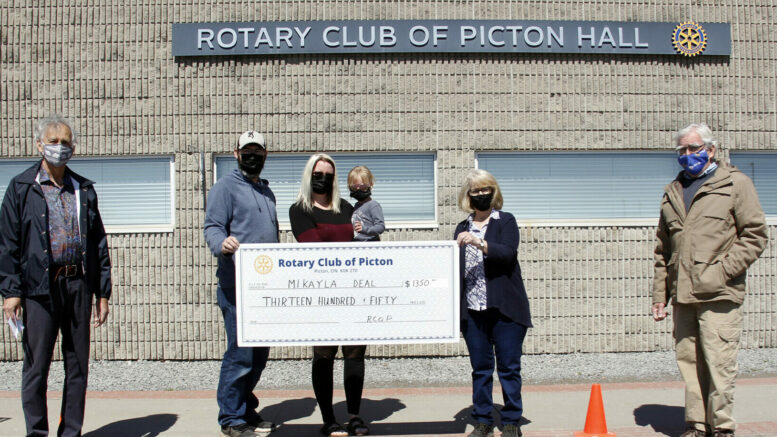 The Rotary Club of Picton, through the Matt Stever Fund and individual Rotarian contributions, have donated $1,350 to a local family to alleviate costs for their daughters cancer treatments.

The fund, created after an groundswell of financial support for Stever family after the young Pictonian was catastrophically injured in a scooter accident while teaching english in Taiwan in 2008. Proceeds from the support Matt’s parents, Roger and Mary Stever received, helped create the fund which is available to families in Prince Edward County who suffer hardship due to family crisis specifically, but not limited to, hardship caused by the severe illness, accident or death of a child.

Consecon residents Mikayla Deal and Joseph Kennedy received some of the worst news possible about their almost three-year-old daughter on March 30. Kathleen was diagnosed with Retinoblastoma, an eye cancer that forms in the retina.

If Retinoblastoma is left untreated, it can spread into the brain and other parts of the body. Thankfully, the cancer has been caught early which gives the young County family hope that with the right treatments and chemotherapy, young Kathleen will overcome this diagnosis.

An unfortunate concern and ultimately unknown at this point in her journey  is the possibility of vision loss in her right eye and a chance she could completely lose her eye during this fight.

Deal and Kennedy first became concerned with Kathleen’s eyes when she started having trouble focusing especially in the car, which normally lead to her feeling nauseous and vomiting when leaving the home.

Last year,  after a regular eye doctor appointment, Kathleen was referred to Hôtel Dieu but because of COVID-19, her appointment was delayed until March 29, 2021.

After a long day at the hospital and many tests, the doctor and a specialist detected a spot in Kathleen’s eye and she was immediately booked for an appointment at SickKids in Toronto the next day.

After many more tests at SickKids and many more doctors Kathleen parents were provided with  the dreaded diagnosis of Retinoblastoma cancer.

This diagnosis has required Deal to take time off work to be beside Kathleen through her battle. Kathleen’s father is counting to work to try to combat part of the financial strain this will ensue, however, Kennedy will have to miss some working days to be there for his family. They will be required to travel between SickKids and their home in Prince Edward County multiple times a week while Kathleen battles this cancer and receives treatment.

“The community support has been amazing,” expressed Kennedy. “In the beginning I couldn’t even fathom this, we’ve had the baseball community reach out, the racing community has reached out and then all our local communities. Its been overwhelming but it’s great on the same side. I never expected the support that we’ve got but we appreciate every ounce of every part of it because its one of those things as a dad I’ve been there to fix everything and solve everything and she’ll be the first one to tell you ‘if daddy can’t fix it, it’s broke’. And at this point I can’t do anything but I’m doing everything I can to help support the way, and the same as her mom.”

The Rotary Club of Picton through the Matt Stever Fund and individual Rotarian contributions is proud to be able to support this little princess and her parents through this fight.

The Rotary Club raised this money to give the family financial comfort during this fight, so they can focus on Kathleen’s winning battle.

For more information on the Matt Stever Fund or to donate please visit https://www.mattstever.com/