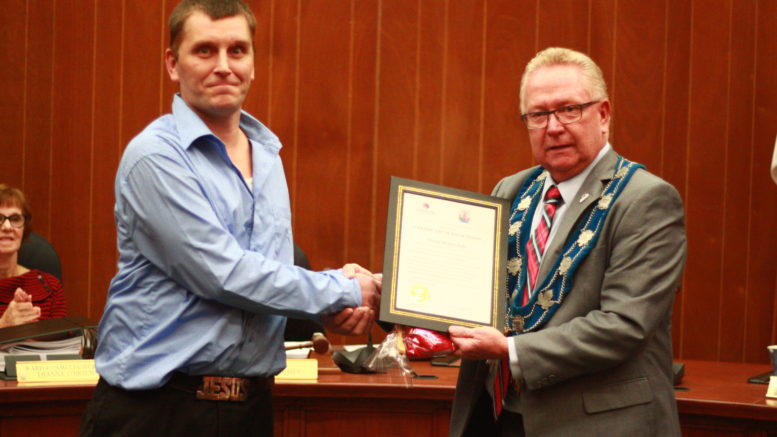 A local man was honoured for his cleanup efforts during Tuesday’s council meeting.

On behalf of council, Mayor Robert Quaiff presented Picton resident Donnie Duffy with a certificate to recognize his ongoing efforts to clean up garbage and used needles along parks and roadsides in Prince Edward County.

Quaiff said Duffy’s efforts have gone unnoticed for many years until recently when his story spread across social media. Subsequently, the Gazette published a story detailing Duffy’s 15-year effort to clean up used needles after being contacted by county resident Jan Cranney.

“Ironically, it was brought to my attention through social media, through Facebook, that we had an individual that was — on his own — out cleaning up our roadways,” Quaiff said. “He never sought any attention or anything else.”

The certificate says the municipality takes great pride in recognizing the effort. The certificate notes Duffy’s work to clean up thousands of discarded needles, which he has for years taken to Kingston to be disposed using his own resources.

In addition to the certificate, Quaiff presented Duffy with a supply of garbage bag tags to assist with his efforts “until we come up with a better solution on how to assist you further.”