There has been plenty of social media sharing regarding Sandbanks Provincial Park over the last few weeks.

All the online park wardens have been sharing snap shots of the beach front, camping spaces and lineups while relaying their disgust at the absence of what the currents COVID-19 norms are.

And yes there will always be concerns when masses of humanity from anywhere the four winds blow gather in close concentration during the pandemic.

But the most recent spate of holier-than-thou pearl clutching from high atop Mount Pious was more than over the top.

A picture of a deserted square of beach littered with refuse of all description- single use plastics, aluminum food ware containers, discarded inflatable boats and water toys and large trash bags- was claimed to have been taken at Outlet Sunday morning and quickly shared with the typical “Look at what the tourists are doing to our beautiful Provincial Park” social media caterwauling.

If the picture is indeed authentic and it was the act of visiting two-legged animals as opposed to the furry four-legged variety than it’s another episode in atrocious behaviour by people that don’t value the beauty of this part of the natural world. It’s sad, it’s depressing and it’s also part of what happens here every summer. Some folks go on vacation and they leave their better selves at home and you can best be sure people living in these parts have been guilty of similar boorish behaviour somewhere down the line in some other bucolic ‘burgh.

None of that excuses the apparent actions of could-be visitors but before an angry horde of Prince Edward County residents grab pitch forks and start blaming every person that travels over water to get here for every single piece of trash floating in the wind, lets try to remember some sites that are notorious amongst us.

We’re pretty sure a family coming to the beach by the car load didn’t strap a soiled mattress to the roof of their car, take a trip down Airport Lane and also drop off a dirty old couch for good measure.

It’s highly doubtful a person putting up drywall in their house located somewhere outside the local postal codes decided to load construction leftovers in the back of their half ton truck, drive a few hours and toss them into a ditch along Royal Road.

Surely a couple with a broke down washing machine in Kingston didn’t suddenly look at each other and exclaim “Chuckery Hill!” at the same time.

And in the spring time after the snow melt, all those discarded fast food containers and coffee cups can’t just fall from the sky, originating from place beyond the clouds where they envy us for living in such a beautiful place.

We’re not sure if the sharing of the mystery photo prompted such a response, but shortly after the scene of garbage went viral, the Sandbanks twitter account offered four pictures of similar, albeit less dramatic dumping. The account stated that individually “we can all do better” and collectively “we can make a difference”. They asked anyone visiting the park to do their part by continuing their garbage and using the proper containers for disposal.

Now we can only hope the local, home-grown litterbugs living in Prince Edward County take heed. 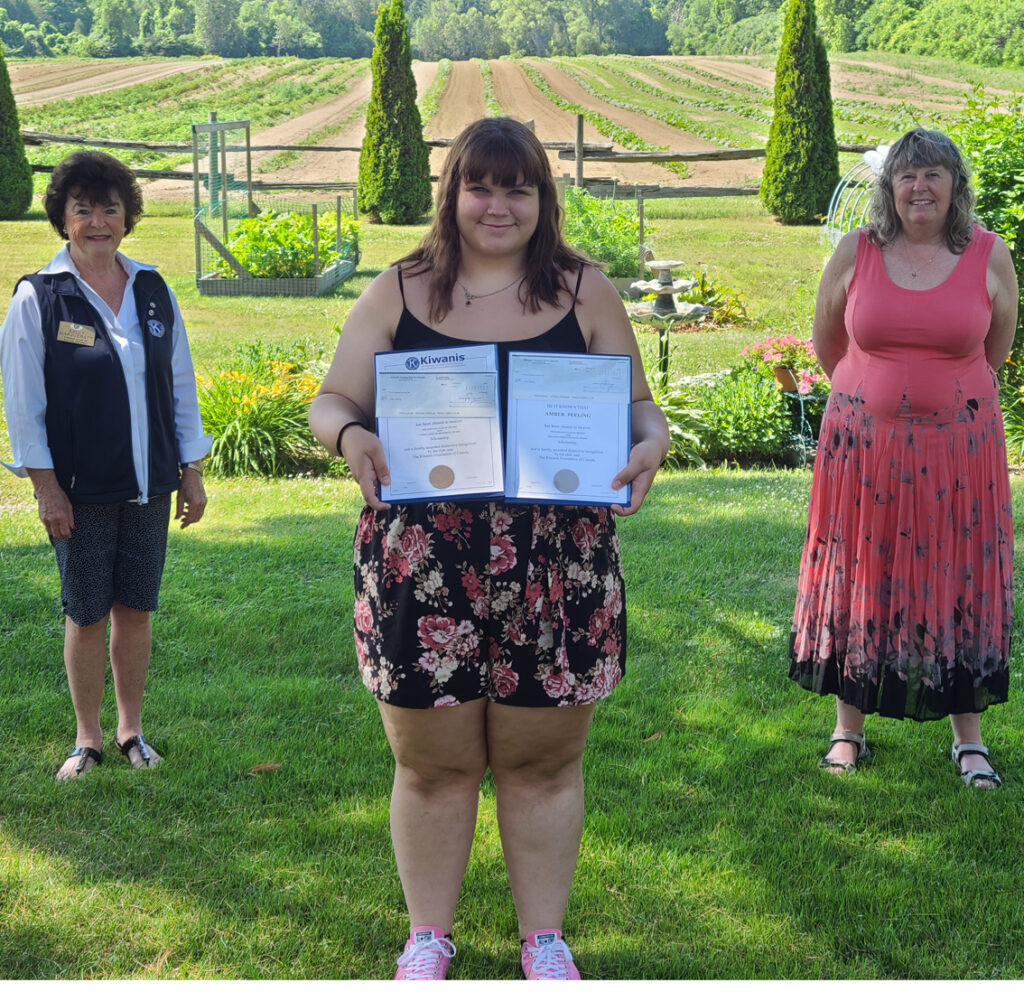 SCHOLARSHIP WINNER – (Centre) PECI Graduate Amber Peeling, was the recipient of two Kiwanis Club of Picton Scholarships in the amount of $500 each. The scholarships presented to Amber were the Chris Lockyer Memorial Award and the Kiwanis Communications Award. The awards are presented yearly by the Kiwanis Club of Picton and the Kiwanis Foundation of Canada to a PECI graduating student who will be attending a post-secondary institution to further their education. Amber will be attending the First Nations Technical Institute in partnership with Canadore College, where she will be studying social work Also pictured are (Left) Kiwanians Sally Margueratt and Jo-Anne Rose. (Submitted Photo)