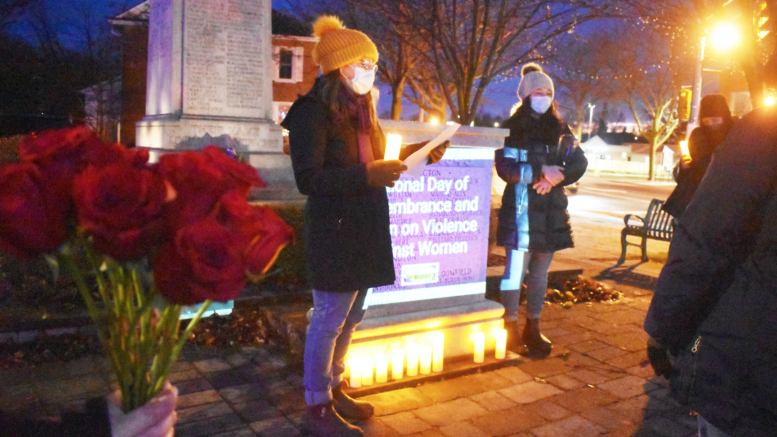 High wind and wintery conditions could not dissuade a solemn gathering at Picton’s cenotaph Monday night at an Alternatives for Women-led ceremony that remembered the 14 young women slain December 6, 1989 at Polytechnique Montréal. (Jason Parks/Gazette Staff)

Members of Alternatives for Women (AFW) along with several community members gathered at the Cenotaph on the evening of December 6th to commemorate the Montreal Massacre- in which 14 women were killed in 1989-and other acts of gender-based violence that have claimed the lives of women and girls. Neither the punishing wind nor the busy everyday procession of workers heading home along Main Street stopped this small group from pausing to take a stand against this type of violence.

Ellen Carlisle, Training and Public Engagement Coordinator at AFW began by the ceremony by articulating the connection between seemingly disparate issues-environmental degradation and colonial violence- that are intricately connected and have a profound impact on rates of gender based violence. 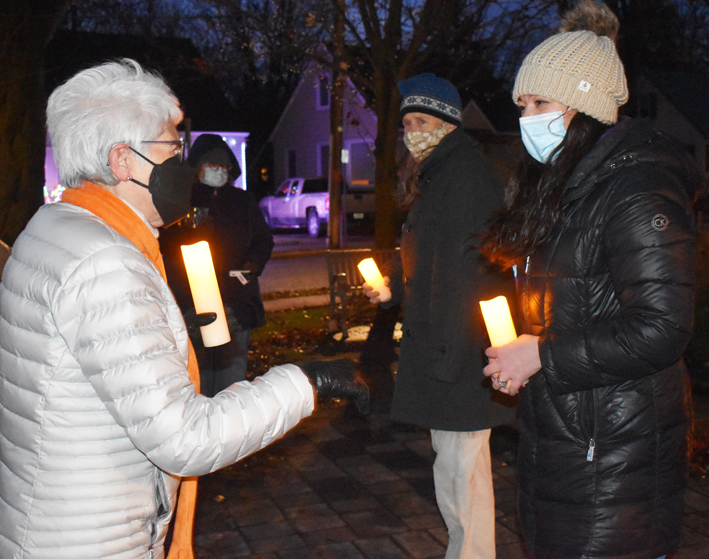 “AFW is working towards the end of violence against women and gender non-conforming people, and that cannot be achieved without ending colonial violence and the unique impact it has on indigenous women and 2-spirit folks. Over the last three decades the Native Women’s Association estimates that over 4000 indigenous women and girls have been murdered or are missing,” said Carlisle. “A Report called Violence on our Land, Violence on our Bodies has drawn clear connections between the level of environmental damage done to the land and the rates of violence against women regionally. Giving greater importance to our land recognition today.”

AFW, like many others across the country, regularly mark the anniversary of the shooting at École Polytechnique. This year, the group also gathered to commemorate yet another grim reality: 58 women and girls were killed in Ontario from 2020-2021 due to domestic violence.

“We also come together for the 58 women and girls killed over the past year in Ontario whose stories were gathered by the Ontario Associatoin of Interval and Transition Houses (OAITH),” noted Carlisle. “We know however, due to the nature of abuse that this is only a partial reflection of who we lost.”

Carlisle also commented on how working in a rural area brings with it an understanding of how isolation can sometimes foster gender-based violence.

“Working in a rural area comes with an understanding of how isolation encourages gender-based violence, but the pandemic has intensified those impacts,” she said. “Separation from support systems, additional safety concerns over leaving a familiar space, and limited transportation services are just a few of the growing barriers that need to be evaluated when trying to exit abuse.”

Leah Morgan, Executive Director of AFW, took some time to speak with the Gazette about the importance of the vigil and how violence against women has changed in Canadian Society since December 6th, 1989.

As Morgan pointed out, AFW has been holding a vigil on December 6th since 1990. Not much has changed in that regard, except perhaps the nature of the gathering during the pandemic. In the meantime, she stated public perception of domestic violence has morphed from viewing it as a private matter to being a societal ill.

“I think the public is taking more of a stance against violence against women today than in 1989. With that being said, up until the 2020 Nova Scotia attacks, the Montreal Massacre was the deadliest mass shooting in Canadian history, and I’m sure the public was absolutely devastated,” she asserted. “I just think that violence against women has been so prevalent throughout history, and that more people are just now really taking action to end it. Especially in relation to domestic violence, which has been viewed as private family business up until recently, as I think it’s viewed more as a social issue now.”

Since the Montreal Massacre, Morgan suggested society has come a long way-no longer viewing certain careers or departments of study to be exclusively for men.

“I hate to think that some people agreed that certain jobs were intended for men rather than women, and that women were taking places away from men in post secondary institutions, but I do believe that was the case. I believe that public perception has changed immensely, as more women graduate from University and enter traditionally male dominated fields,” she said.

When asked whether the yearly vigil holds special significance with rising rates of femicide, Morgan replied that, sadly, violence against women is a problem often viewed as having been solved.

“I think that the vigil is a reminder that Femicide still occurs often,” said Morgan. “I think the average person believes that violence against women isn’t as common as it once was and are shocked to learn that it’s actually increasing.”