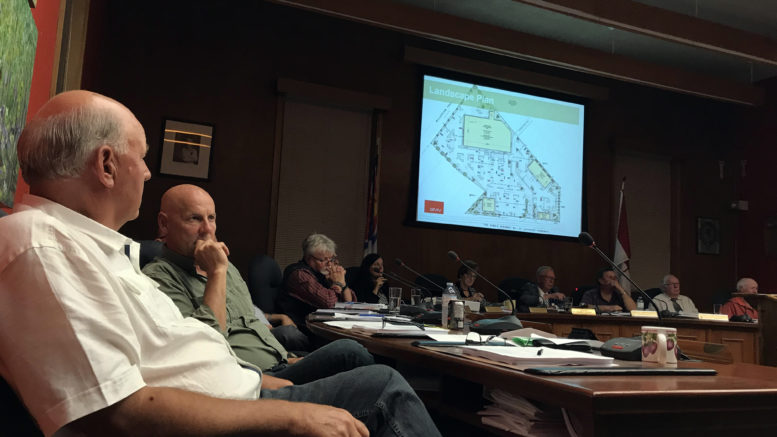 While staff advised against moving forward without more study of the impact on existing local businesses, council voted Tuesday evening to approve official plan and zoning bylaw amendments for a proposed commercial development on Loyalist Parkway across from Picton No Frills.

The amendment to the official plan was required to allow a commercial building with a floor area greater than 2,000 square metres, while the zoning bylaw amendment would permit a new food store and additional retail units.

Staff had presented recommended amendments, but council turned those down in favour of amendments put forward by the developer. The municipality and the developer had been negotiating the amendments for several months.

The decision was made in a recorded vote of 9–7 with councillors Bill Roberts, Lenny Epstein, Jamie Forrester, Gord Fox, Treat Hull, Janice Maynard, and Mayor Robert Quaiff voting in opposition. A motion to approve the staff recommendation lost in a recorded vote by the same margin.

Councillor Dianne O’Brien was among those who spoke in support of the developer’s preferred amendments. She said the developer already verbally agreed not to allow businesses currently located in downtown Picton to relocate to the site.

“We don’t need a study, they’re going to protect that anyway,” she said. “…I think we’ve done all the studies we need to do, they’re clear and we’re clear, so I’m willing to support Picton Properties at this time with an agreement that they will not encroach on any downtown stores.”

“You’re putting a noose around somebody’s neck if you don’t give them that flexibility,” he said. “No one has yet given me any proof of any downside to this.”

Much of the discussion Tuesday centred around the requirement of a Retail Impact Assessment. The requirement for the study was triggered by the inclusion of the food store, which exceeds the 2,000-square-metre limit outlined in the County’s planning guidelines. Developer Picton Properties Ltd. obtained consultants urbanMetrics Inc. to complete the market study, which subsequently confirmed market support for the food store, health and personal care, and general merchandise (dollar store) uses.

The municipality tapped Mimi Ward of Ward Land Economics to complete a peer review of the proponent’s Retail Impact Assessment. That peer review was completed on July 27.

Chisholm said one issue was, aside from the food store, the zoning of the property would permit only a drug store and dollar store at the site, at the exclusion of all other retail uses. While County staff advised they would be open to allowing further uses if there was data to support them, Chisholm argued it was still unclear how broad the Retail Impact Assessment was expected to be.

“Let’s talk about it, let’s be specific,” he said. “But to say, ‘we’re not going to tell you what we’ll permit and not permit unless you do a market study,’ it’s just too cumbersome to develop a property that way.”

He said part of the problem is it’s still unclear who the tenants in the new development might be.

The report says there are two reasons staff recommended the Retail Impact Assessment, the first being the size of the proposed new Sobeys store. Secondly, the report says the developer proposes to re-designate a 1.4-hectare portion of the 2.7-hectare parcel to the town gateway designation from its current town residential designation. The report suggests the move would create commercial lands equivalent to the size of the current Sobeys plaza and impacts on downtown should be demonstrated.

Among those who voted in opposition to the amendments were councillor Roberts and Mayor Quaiff.

Roberts said it appeared staff had made every effort to work with the developer.

“I have to say, I think staff has been extraordinarily flexible,” he said.

He said staff were trying to guide council to make decisions based on facts and not opinions.

“It seems to make infinite sense to me that when we get to official plan amendments and zoning bylaw amendments that they be consistent with complete and proper analysis,” he said.

Quaiff said he was “extremely disappointed” that the decision came down to the 11th hour. He said he’s pro-development and wants the development to move forward, but has been left thinking why the municipality bothered to hire the peer review firm. He said all the municipality was seeking was additional market study on the retail clothing sector and a overview analysis of the impact on a range of other retail sectors.

“It doesn’t make any sense to have two little columns left as the concrete pillar that’s going to stop this development — in my opinion, it seems utterly ridiculous,” he said. “All we asked for was those two columns, but the developer in this case seems to say, ‘no, we’re not doing it.’”

He said it appeared the developer was trying to write their own bylaw as opposed to letting staff craft a bylaw that fits Prince Edward County. He said without the study, it’s uncertain what the impact on downtown Picton might be.