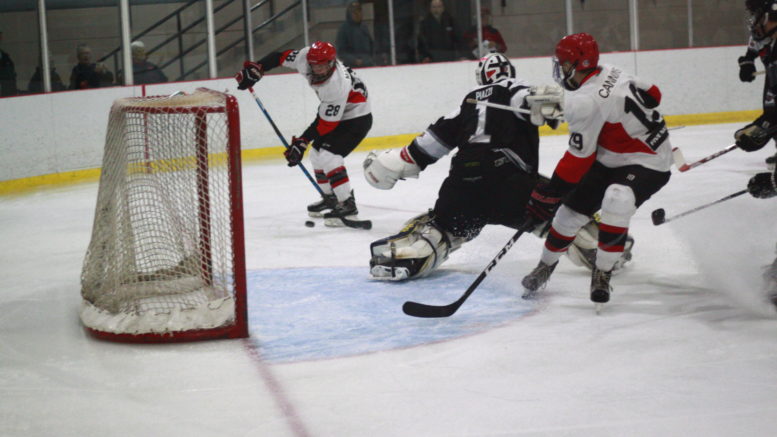 It was an up and down week for the Picton Pirates, falling to Napanee last Thursday before winning big over Campbellford on Saturday.

The Pirates led the Raiders 4–2 early in the second period on Thursday but stumbled in the third, losing 6–4. The team followed up with another big 8–0 victory over the struggling Rebels.

“That’s a couple of third-period collapses against Napanee,” said Masterson.

The Pirates got off to a good start against the Raiders. Early in the opening frame, Elliot Belzile was assessed a slashing penalty and the Picton power play went to work.

Tye Eaton collected the puck below the Napanee goal line and fed it out front to Jordon Cannons for a tap-in goal 3:31 into the game.

The Pirates held the lead for half the period, trading chances with Raiders, but the run-and-gun play got them into trouble. Ryan Casselman carried the puck into the Picton zone and snapped a wrist shot over the glove of goaltender Wesley Werner, tying the game on the rush chance.

The pace didn’t slow as the Pirates went back to work. Just 1:27 later, Brayden Bertrand fed a backhand pass through the Napanee crease to Chase Burden, who easily found the twine. But just 13 seconds later, the Raiders pulled even again with Tyler Ignazzitto scoring on another rush chance.

It appeared the teams would head into the second period tied 2–2, but in the final minute Picton generated another two-on-one with Noah Brant feeding Cannons for the goal.

The Pirates picked up where they left off in the second. Just 34 seconds into the period, Devin Morrison scored to make it 4–2 with Nick Kyte and Brant tallying assists on the play

At 10:04 of the period Riley Manion was sent to the box for interference. Just 24 seconds later Kelsey Katchuik joined Manion in the sin bin on a roughing call. It took just nine seconds for the Raiders to capitalize on the two-man advantage with Casselman scoring the power-play goal to make 4–3.

The Pirates headed into the third with the lead, but the Raiders managed to take control.

At the 3:40 mark of the third Jake Campbell scored to even things up. Less than two minutes later Justynn Steven beat Werner to give the Raiders their first lead of the game. Casselman would complete the hat trick with an empty net goal in the final minute of regulation to make it 6–4.

Masterson said the Pirates seemed to have a solid first period and played well for a portion of the second before seeming to fade.

“We just went really flat and I’m not sure how to explain it other than conditioning is something we need to work on,” he said.

The Pirates had a couple of third-period power-play opportunities to get back in the game. While

Masterson said the club has liked its work on the man advantage this season, they weren’t able capitalize. They ended the game one for four with the extra man while Napanee ended at two for six.

“The power play is something [coach Tyler Green] has worked on pretty extensively with the boys so far and I think it’s improved a lot over last year,” said Masterson. “It’s something we’re still trying to fine tune.”

He said Napanee will likely be among the division’s leaders all season. He noted the club has some strong offensive talent, including Ryan Casselman who played last season for the Cobourg Cougars of the OJHL tallying 73 points in 53 games.

“We were disappointed in our effort in the third period, but that’s a good hockey team there,” he said.

It was a much different story on Saturday as the Pirates faced the 0-7-0-0 Rebels. Masterson said club management was happy with the team’s effort on Saturday.

“It’s always tough to be up and play against a team like that,” he said. “Our boys found a way to do it and compete hard without being unsportsmanlike.”

Gerald Bilker scored the opening goal on the power play just 2:24 into the first. Will Harrison had the assist. Jaydon Wood made it 2–0 at the midway point of the period with Justin Arnold and Tyson Cassidy picking up assists. Cannons potted a power-play goal just over a minute later from Bailey Matthews and Harrison. Harrison added a goal at 14:33 from Bilker and, just 15 seconds later, Wood scored shorthanded to make it 5–0. Burden and Keegan Wayte had the assists.

Morrison added a pair of goals — from Cannons and Kyte respectively — in the second period to make it 7–0 heading into the third. Burden would add a power-play marker from Wood and Cannons to round out the scoring.

“I thought our boys responded pretty well and played a solid game against Campbellford,” Masterson said.

The Pirates will take on the Gananoque Islanders tonight at 7:30 before travelling to Port Hope to face the Panthers Saturday evening at 7:30. Picton then takes on the Islanders again on Sunday at 7 p.m in Gananoque.

Picton will again have to switch gears between facing one of the division’s struggling teams in the 1-6-0-0 Islanders and one of its top teams in the 7-1-0-0 Panthers.

Masterson said that seems to be an early pattern as the league appears to be divided into three with Port Hope and Napanee at the top, Amherstview and Picton in the middle, and Gananoque and Campbellford at the bottom.

He said Saturday’s contest versus Port Hope will be a big test.

“We’re really keyed up and looking for that and, of course, you can’t overlook Gananoque on Thursday night either,” he said.