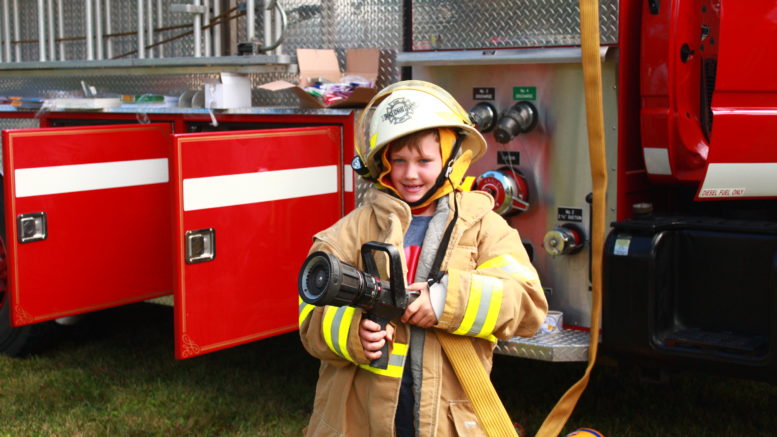 An early downpour didn’t get the way of another successful Consecon Community Day.

Held annually on the August long weekend, the event continued to attract a solid number of residents and visitors to the hamlet.

Sponsored by the Ameliasburgh recreation committee, the daylong festivities began at 8 a.m. outside of Emm’s Restaurant on Loyalist Parkway with the annual car boot sale. Yard and garage sales took place across Consecon and a variety of local businesses offered workshops and attractions for the day.

Event media co-ordinator Bill McMahon said there was some rain early on Saturday but, once that cleared up, the event went off without a hitch.

He said this year’s event featured something special. International portrait photographer Gabi von Gans, was in Consecon on Saturday morning to take a group photo at the local United Church. The photoshoot, which will be titled “Consecon — Portrait of a Town,” is expected to be included in a six-part series commemorating Canada 150.

“She has picked six locations in Ontario and she’s putting a book together,” McMahon said. “The Picture itself won’t come out until September.”

McMahon said von Gans was in town thanks to Janet Battaglio of Janet B Gallery & Studios. The gallery features some of von Gans’ wedding, portrait, and lifestyle photography.

A total of 67 kids participated in the seventh annual Consecon soap box derby, this year going head to head on two new ramps.

He thanked Picton Home Hardware owner Adam Busscher for supporting a portion of the materials for the new ramps.

McMahon said initially the events were held separately. Community Day originally took place the weekend following Canada Day and the same year the inaugural soap box derby was held on the August long weekend. He said since combining, the soap box derby has become one of the biggest afternoon draws during Community Day.

McMahon said the event seems to be inspiring other communities. He noted Madoc and Frankford have recently started their own soap box races and have looked to Consecon for tips.

“It’s not easy, it take a while and it’s a lot of social media,” McMahon said. “It’s built and 67 kids is mind-boggling.”

Alice Kent said her family bought a new home in Consecon in April. She said they were anticipating community day for some time.

“It’s our first time joining in the fun,” she said. “It’s great, now that the rain has cleared. We’re going to go check out the soap box derby and the barbecue and check out some more of the stores.”

She said she was excited to visit The Mill, the newly renovated restaurant which had a soft opening during Saturday’s event. She said the hamlet has a lot to offer.

“Consecon just seemed like a little secret corner of the county that is probably not going to be so secret anymore,” she said. “It’s kind of one of the last frontiers of the county.”

Nine-year-old Rex Nelson had a turn behind the wheel of a Prince Edward County fire vehicle. He said he enjoyed testing the siren and trying on some firefighting equipment.

The winners of the soap box derby were:

The fastest car of the day was piloted by Jayden Hunter, who was clocked by OPP radar at 37 km/h.