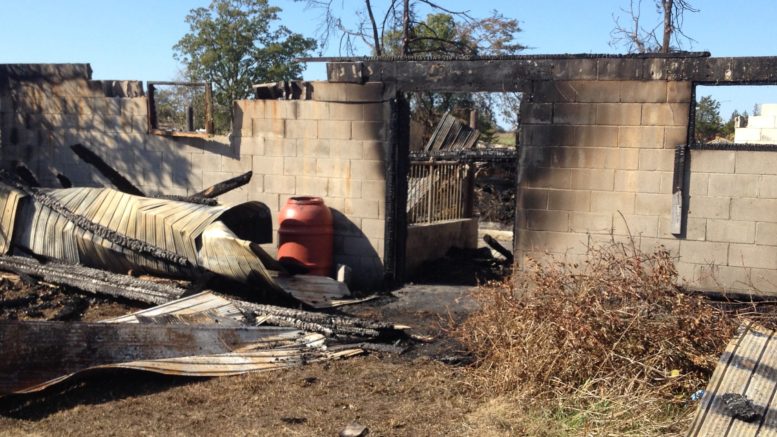 A burnt cinder block foundation is all that remains after a suspicious fire razed a barn in South Marysburgh in the early morning hours Saturday. (Jason Parks/Gazette staff)

A second suspicious barn fire in successive weeks and a potential connection to similar incidents in Lennox & Addington County this summer have local fire officials wondering if there is a well travelling fire bug targeting little used barns in the area.

Prince Edward County fire crews were called to a report of a fully involved barn on County Rd. 13 between the hamlet of Black Creek and Murphy Road just after midnight on Saturday.

In turn, local fire officials were quick to notify Prince Edward OPP and the Ontario Fire Marshal’s Office that another non-energized barn had been ignited.

Chief Scott Manlow said the blaze met the criteria of being a suspicious fire as it was similar to the barn fire on County Rd. 49 in that it was set late in the evening hours and the barn wasn’t being used for anything other than dry storage.

“If it falls into the same criteria, we make the call to the O.F.M. and they come down and conduct an investigation,” Manlow told the Gazette. “They arrived on scene Saturday morning, conducted an investigation and recorded their findings.”

The barn contained a riding lawn mower, a few small implements and some hay but no animals had been housed in the barn for some time according to Manlow.

Manlow said figuring out losses in these situations can be tough considering recaptured timbers and barn board can fetch huge dollar amounts from the right buyers.

“We deal in replacement value but if you look at the barn on County Rd.. 49, it had those 6” by 8” beams that can be worth a lot to the right person,” he added.

In addition to the loss of the structures and the potential for the fire to spread to adjacent properties, there’s also the stresses it puts on the fire coverage of adjoining wards.

“There are replacement plans in place in the event there’s another call in the same area but it does thin out the resources out a bit,” Manlow said. “We spent 12 hours at the scene, six hours fighting the fire and six hours cleaning up and helping with the investigation and it’s a taxing event on the department and not to mention the cost to taxpayers.”

On top of that, it’s unsettling to think the brave firefighters of Prince Edward County are risking their lives because of someones deliberate actions.

According to an OPP press release issued Saturday, no     suspects have been identified at this point for the second fire, however, the investigation is continuing into a suspicious barn fire that occurred on October 08, 2017 on County rd 49 in which a four-door sedan type vehicle beige or taupe in colour was seen in the area several times prior to the blaze breaking out.

Both fire and police officials are asking the public to vigilant in observing barns and sheds in secluded areas that could be targeted by unknown person(s).

A number of suspicious fires are also being investigated in the Napanee area. Its believed no less than six barns have burned down in suspicious circumstances in the past six months.