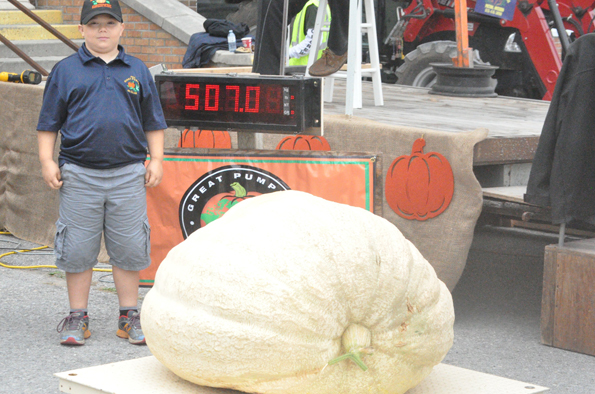 A giant man - Carter Black, 11, of Huff’s Island Road is seen here with his large pumpkin entry. Black also brought a 152-lb watermelon to the weigh-off, the largest weighed in Canada this year. (Adam Bramburger/Gazette staff)

Everything seemed bigger in Wellington on Saturday.

As the giant vegetables rolled through the streets for the 21st annual Pumpkinfest parade, audiences primarily dressed in seasonal orange stood lined a bit deeper than usual. Craft and produce vendors spilled into additional areas on both sides of Main Street downtown.
Even the weigh-off itself attracted more people and more entries than many of its counterparts this year.

“We probably had one of the better weigh-offs in terms of giant pumpkins. Most of the weigh-offs this year have been light,” said seasoned county grower John Vincent. “We probably had 27 or 28 entries between pumpkins and squash.” 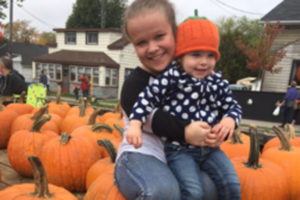 ers from across eastern Canada because it’s the last one in Canada and many growers try to get every last bit of weight into their entries.

This year, it was of particular importance as it was a slow growing season.

“It was pretty cold and wet, so our own pumpkins didn’t turn out so well. It was so cold early we couldn’t get the plants big enough fast enough. You need a nice May and then you can deal with the variables in June, July, August, and September,” he said. “It was too wet early on. We almost had fish swimming in our garden May 1.”

Asked if it was a particularly tough growing season, Vincent said “It’s never perfect” and mentioned that last year it was so hot and dry that those conditions also posed problems. However, most giant vegetable growers are used to controlling their environment through all the seasons and those who could get their plants into the ground in a controlled greenhouse environment earlier did well.

All that said, there wasn’t a record pumpkin at this year’s event. Jim and Kelsey Bryson of Ormstown, Que. who set a world record at Pumpkinfest in 2011 had the heaviest entry again this year at 1,608 lbs. Napanee-area man Dan Clement, who has been growing for three years, placed second with a pumpkin weighing 1,476 lbs. Clement brought two pumpkins to the weigh-off with both estimated to be about the same weight. Since he could only weigh one, he added some excitement for new and veteran growers alike.

“His was a bit of a nail biter,” Vincent said. “They were two totally different shapes and he had a whole bunch of growers looking and tapping them with their fists to see which was heaviest.”

As Wellington Rotarians harnessed the big pumpkin on a forklift and drove it to the scale, Vincent had a little fun with him asking if he’d like to weigh the other ones. Clement stuck to his guns and he was right — the difference, a jump from third place to second and a larger share of the prize money.

Todd Kline had the biggest squash this year with an entry that tipped the scales at 973.5 lbs.

Local grower Susan Jones, of Sophiasburgh, also had a successful first venture at Pumpkinfest as she won an award for the producing the best pumpkin of a novice grower, with her entry reading 538.5 lbs.

One thing that was bigger at Pumpkinfest was Carter Black’s watermelon. The Prince Edward County 4-H member from Huff’s Island Road had the biggest one weighed in Canada this year at 152 lbs. Black had six or seven entries in a whole range of competitions at the weigh-off and he also produced a number of giants for the Picton Fair this year.

Black farms with his dad Steve, who is a commercial farmer exhibiting at the Belleville Farmer’s Market. Steve jokes that “Carter’s the giant man, not me.”

The 11-year-old grower goes out to his pumpkin and watermelon patch about every second day during the growing season to inspect his crop and see how they’re growing. He said he has a simple recipe for success.

“We use a water soluble fertilizer, which helps, special seeds, and lots of luck,” he said. “We also water a lot.”

Originally, he didn’t think the effort would produce results.

“It took forever for stuff to pollinate,” Steve recalled. “He didn’t think he was going to have anything.

The moisture was better this year, but it was so cold it took forever to get going.”
Black said he was impressed with his first foray into Pumpkinfest. He enjoyed the chance to talk with other growers and see some of the big fruits and vegetables they’ve grown.