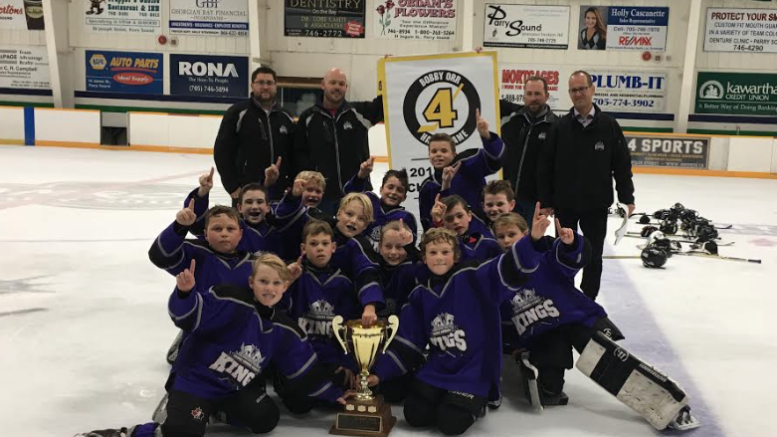 The Atoms of Prince Edward County were crowned Kings in Cottage Country this weekend.

The Terpstra Equipment Atom BB Kings were the ultimate heartbreakers at the annual Bobby Orr Classic Hockey Tournament in Parry Sound, going undefeated through the preliminaries and knocking off the host club Parry Sound Shamrocks in the championship final Sunday afternoon 1-0.

It was the first major tournament win for a team representing the Prince Edward County Minor Hockey Association this season and was well earned according to Kings benchboss Tod Lavender.

“It really was. We were happy with the way everyone played and battled hard having only played a few games thus far into our season,” Lavender said.

Facing the Shamrocks in front of a raucous and partisan crowd at the Bobby Orr Community Centre was no easy task considering the hosts were undefeated in their season heading into the final.

“There was some adversity and stage fright I’m sure but we responded well,” Lavender said.

The netminders were the stars of the show through most of the game with both Kings netminder Lainey Van Vlack and Shamrocks puckstopper Brian Plomer pitching shutouts late into the game.

The Kings were able to force a turnover in the Shamrock end and the puck found the stick of Mitchell Sills. Sills was able to cut across the slot area and lift a backhanded effort over the blocker of Plomer with about three and half minutes left in the game.

That goal came after the Kings had about five or six Grade A scoring chances and were heavily testing the Shamrocks.

“We did a really great job of keeping them out of the danger zones, and Lainey saw the puck all game,” Lavender added. “There was not a lot of secondary chances and that’s a credit to the work of Tyler Doolan, Theo Lavender, Cameron Billing and Will Theakston on our blueline.”

The Kings found themselves in the final thanks to a 3-2 semifinal win over the Elmvale Coyotes.

The Kings were down a goal early until Jackson Payne tied the contest. In the late going, it would Sills notching a pair of goals in the span of about ten seconds to punch Prince Edward County’s ticket to the finals.

Hayden Bender had an assist on the eventual game winning goal as Elmvale scored with a second left to finalize the scoring at 3-2 in favour of the Kings.

“I think we bonded as a team and I’m sure when the players look back on this tournament they will remember playing in a hostile environment for a championship and coming out on top,” Lavender added.

And it wasn’t just the Shamrock fans the Kings had to deal with in Parry Sound.

“We saw two bear cubs and a momma bear in the arena parking lot and no one got ate so, overall, it was a pretty good weekend,” Lavender said with a laugh.

The Kings are in Madoc on Saturday to tangle with the Centre Hastings Grizzlies and return home to Wellington on Sunday to play the Douro Dukes at 4:30 p.m.