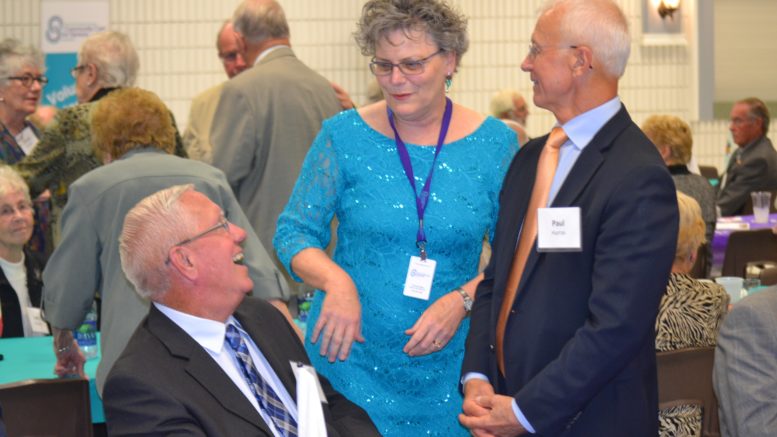 Active and retired political and business leaders and organizational staff both past and present gathered en masse at the Rotary Hall Thursday night to toast 40 years of supporting seniors in our community.

It was four decades ago when over 20 agencies in Prince Edward County collaborated in a pilot project to enhance the services offered to the community’s older residents and, in that initial launch, The Prince Edward County Community Care for Seniors Association was born.

One of the first of its kind in Ontario, the association has engaged the skills and enthusiasm of over 500 volunteers to deliver a wide range of services to older adults in the community for well over half a century.

From transportation services to social and fitness programs, foot care clinics to Meals on Wheels, Community Care has provided much needed services and been the catalyst for keeping seniors in our county not just surviving but thriving in their homes

And as it was an official opportunity to fete the organization and all the help the Community Care has doled out in four decades, the banquet also served as an opportunity to commemorate its long-time executive director Debbie MacDonald Moynes.

“Relationships with the Prince Edward County library system, the Prince Edward Family Health Team, Canada Post, Canadian Union of Postal Workers, the OPP and the municipality are true examples of ongoing team and collaborative approaches that enable seniors to live independently in their homes and to remain connected to their family, their neighbours and their friends,” she added.

And as the face of the organization, Proctor said providing a steady hand over times of uncharted waters has always been its executive director.

MacDonald Moynes joined the organization in its early days and, for the past 36 years, has been working tirelessly, dedicating her skills to the betterment of seniors here.

Ellis thanked the organization’s volunteers both past and present for crafting a legacy organization in Prince Edward County that’s built around volunteerism.

“When you look at organizations that succeed and ones that don’t succeed, it’s all about governance and volunteers and to see the past and the present here tonight, it shows how well this organization is run and how its valued within this community,” Ellis said.

The MP added getting seniors to live and stay in their homes and keeping them independent in a community like Prince Edward County is important and referenced the ‘grey wave’ of aging baby boomers in the offing.

“There will be some tough slogging ahead for some areas so I’m happy to see how healthy Community Care for Seniors is are and how ingrained this organization is in the community,” Ellis added.

In his remarks, Quaiff acknowledged former Prince Edward County Mayors Leo Finnegan and James Taylor who were both in attendance.

Both men dutifully lead municipal government while in their senior years and Quaiff called them both mentors that offered an extreme wealth of knowledge.

Quaiff began by stating the fabric of Prince Edward County is immensely stronger thanks to the many contributions of enthusiastic volunteers, staff and the seniors that are served by the wonderful organization.

The mayor explained the municipality had the second largest build of seniors per capita in Ontario and sixth largest in Canada.

That demographic trend is likely to continue over the coming years as baby boomers and Prince Edward County is an attractive place for seniors to retire given the natural beauty and number of activities available to older adults,” Quaiff said. “We want to continue to enhance the County as an age-friendly place, a place where seniors can move freely and safely, enjoy good health and stay involved.”

Quaiff said the municipality can encourage an age friendly community through a variety policies and services but “we can’t do it alone.”

He said the wide range of services the organization provides to older adults is impressive and those services allow older people the opportunity to live independently and contribute to all areas of this wonderful community.

Paul Huras, the Executive Director of the South East Local Health Integration Network, harkened back to the early days of his organization and recalled a series meetings with MacDonald Moynes and a host of other support service providers as the local LHIN started to ramp up as overseers of healthcare in the region.

Huras remarked at the seamless way in which MacDonald Moynes was able to communicate with those leaders and bring them together to help understand the roles each would play in the new dynamic of Ontario health and services rollouts.

In a very quiet way, but In a very clear way , she was providing leadership to the concept of community support services,” Huras recalled. “You should be proud of that role as well as the services that are provided in this community.”

As for the early day of Community Care, former staff member of the Ministry of Community and Social Services-Senior Citizens branch Dick Flemming recalled meeting with MacDonald Moynes in someones kitchen and took up from Huras’ comments about the passion and leadership exuded from Day one of her 36-year tenure.

“I met Debbie and here was a person that was very direct, here was a person that was very determined. Those qualities and many others characterize her work with you and also the determination of the people in Prince Edward County to continue to support this organization and to see it grow,” Flemming said adding that the milestone should be looked as just that-not stopping point.

The highlight of the evening was the sneak preview of a pair of History Lives Here vignettes and a Community Care promotional video featuring the faces of many of the organization’s volunteers, clients and support staff.

Local historian, documentarian and journalist Peter Lockyer of History Lives Here debuted his vignettes about the role seniors had in the early pioneer days as well as a two minute spot the grandfather of the Ontario Cider Industry the late Grant Howes. 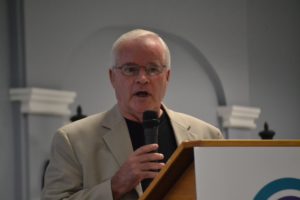 In his pioneer vignette, Lockyer explained the average lifespan in the 1840s was 50 and even less for women, who often died due giving birth and in an age where success was measured by survival, seniors remained valued members of close-knit families and communities.

Seniors valued education at a time when illiteracy was widespread, he said.

“Most of all, they believed in the great promise of the country we enjoy today. These were gifts to last.”

Gifts to last in the same way Community Care for Seniors is a gift to Prince Edward County.