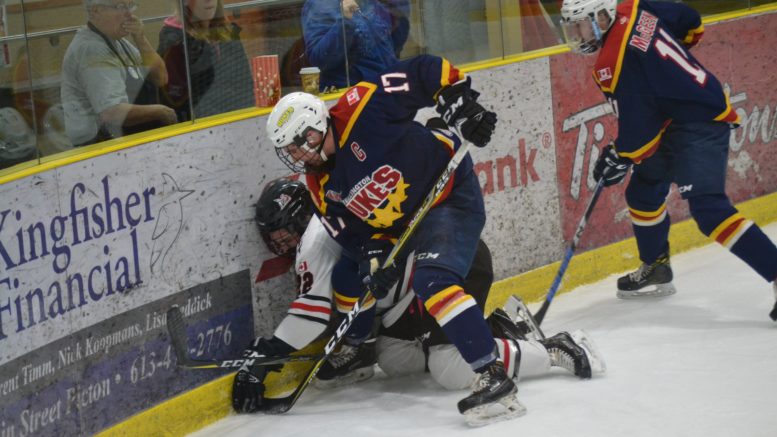 Given that the Wellington Dukes lost exactly one game in the 2002-03 regular season, it’s safe to say that the start enjoyed by the current formation of the county’s Junior A hockey isn’t their best ever.

But best start in the last decade?

The Wellington Dukes opened the 2010-11 season with just one regulation loss in their first 16 games, a year where the club would taste defeat in regulation just seven times.

A pretty great start for a team that wouldn’t do much expect rack up 81 points and play in the Royal Bank Cup in Canmore after winning both the Buckland and Dudley Hewitt Cups that spring.
Of course county hockey watchers should pump the brakes a little on the expectations of the current team, given their relative age and experience.

But here’s where the rubber meets the road with these Wellington Dukes after a weekend where they took all six points available.

On Friday night with the game tied 0-0 in the late and the visiting Mississauga Chargers seemingly one bounce away from a fluke win, you would have been forgiven for thinking that was the time the some of the air would be let of Wellington’s tires.

On Saturday night and taking on the North Division leading Aurora Tigers when the club’s bus breaks down and the team arrives at the Aurora Community Centre just as warm up was starting, you would have been forgiven for thinking that was time Wellington was about to take it on the chin.

On Monday night, facing a scrappy and resolved Cobourg Cougars and down 2-0 after two in a hostile rink, you would have been forgiven for thinking that the ride of taking points in 10 straight was over.

But no, Wellington (10-1-5) did what Wellington hockey teams used to on a rather frequent basis not too long ago.

They stuck to a game plan, wouldn’t let things like bad calls and bad bounces beat them and earned the wins they deserved.

“Overall, the goal was six points and we got those six points,” Dukes Coach and General Manager Ryan Woodward said. “You break down each game and you see where we need to be better but the signs to battle back and show some character through adversity are very positive.”

Their 4-3 triumph in Cobourg was proof positive this team comes to play and can win in any number of fashions.

Down a pair, Graeme McCrory’s work in the offensive zone paved the way for Mitch Martan’s seventh of the year at 5:13 and the goal provided some lift for Wellington.

“It’s our third game in four nights and I thought we had some really good chances early but then we lacked energy part way through the game,” Woodward said “In the third, our veterans stepped up and you could feel that momentum start to switch to us.”

After jumbling the lines to get the club stirred up, team captain Colin Doyle was united with Ben Evans and the Campbellford native set up Evans less than 40 seconds after Martan’s goal to tie it at 2-2.

the much-maligned (in some corners, anyway) Mitchell Mendonca has been one of the club’s top performers at both ends of the ice for the past month and continued that trend, setting up Doyle for a go ahead goal at 13:11.

Mendonca would wind up getting the game winner on an empty netter with 16 seconds left as the Cougars scored a pretty meaningless goal with less than a second remaining to finalize the scoring at 4-3.

On Saturday, not even a delay due to a broken down bus could stop Wellington.

Even without a proper warm up, the Dukes came out firing and it was Andrew Rinaldi scoring just seven seconds into the contest off an Evans cross ice feed to give Wellington its earliest lead of the season.

“Looking back, it might have been the best thing for us,” Woodward said with a laugh. “We didn’t have too much time to think about it. We were looking at that game as a real test for us.”

Aurora would tie it later in the first on the powerplay but Wellington would move ahead to stay in the second.

Evans found Eric Uba at the side of the net for the game winner at 4:33 and then spotted Mendonca for for his third straight helper at 16:09.

Evans added his fourth straight assist in the third period off Keegan Ferguson’s point blast at 13:03.

“there’s certainly a lot of chemistry there with Evans and Rinaldi and Mendonca,” Woodward said of Wellington’s top production line this weekend. “Evans and Rinaldi play heavy and straight games and that gives Mendonca some room to operate, see the ice and make plays.”

Making plays was exactly what Mendonca did with Martan on Friday night to stop the goaltending clinic being put on by Mississauga Charger Luca Durante.

Channelling his older brother Stefano Durante who always seemed to save his best games for when his Cobourg Cougars would invade the Essroc Arena, Luca Durante had the Wellington shooters under his spell for well over 40 minutes.

Highlight reel saves came in waves as the clubs remained deadlocked at 0-0 until the 46th minute.

After some sustained pressure in the Charger zone where the visitors finally seemed ready to crack, it would be a nice move by Martan in the slot that drew the attention of Durante.

Receiving a nice cross-crease pass was Mendonca who had nothing else but to shovel a loose puck into a gaping Mississauga cage.

“We really had to stick with the game plan and stay focussed,” Woodward said. “There can be a tendency to try and get too cute in situations like that but Mendonca and Martan went to the tough and dirty areas to make that goal happen.”

It was enough to stand up a winner as Jonah Capriotti made 17 saves to earn his second shutout in just the Mount Hope native’s sixth start.

Capriotti won his seventh start of the season on Saturday and is 6-0-1 with a 1.81 Goals Against Average and a .944 Save Percentage.

Creed Jones picked up the win on Monday night, his second of the campaign.

The Dukes host Pickering on Friday night and Marty Abrams and his Trenton Golden Hawks make their first trip to Wellington on Sunday afternoon.