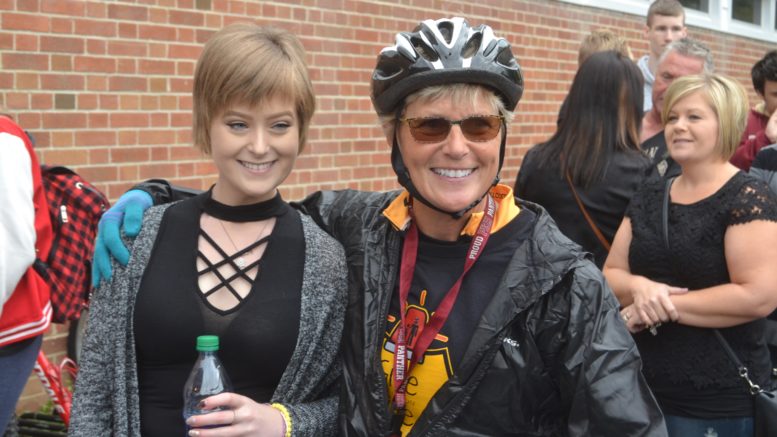 PECI student Abigail Heffernan and Prince Edward OPP Constable Kim Guthrie were all smiles at the ‘Give Where You Live’ stop at the secondary school Wednesday. (Jason Parks/Gazette staff)

The name might not be the same but the Give Where You Live (GWUL)campaign has the support of children in the Quinte region.

Formerly known as Pedal for Hope, a four-day bike tour involving members of regional police forces including the Prince Edward OPP detachment came streaming though Prince Edward County last week in aneffort to raise funds for Camp Trillium’s OuR Island on West Lake near the village of Wellington.

All told, the GWUL tour raised upwards of $20,000 —double the organizers’ initial goal and the rebranding allows organizers to decide where the money raised would be best allocated and have the most impact for children fighting the dreaded disease.

Locally, over $1,000 was raised at schools in Prince Edward County. On Wednesday, the cyclists brought their travelling fundraising party to PECI complete with the fanfare of loud rock music, balloons, ice cream eating contests and general craziness.

Despite the fact PECI was in the middle of its Terry Fox Run fundraiser last week, the school jumped at the chance to be a tour stop.

Typically run in the spring in years past, the fall timeline meant the school realty needed to step up its fundraising game.

The students did just that according to PECI Canadian and world sudies educator Greer Koutroulides.

“We knew it would be a tight timeline after Terry Fox last week but our students responded really well and really supported GWUL,” she said. “This school has a strong community feel and you can tell that by the money raised and the support of Abigail Heffernan.” PECI students took part in the ice cream eating contest at the Give Where You Live tour stop Wednesday. (Jason Parks/Gazette Staff)

Despite all the partying and festival-like atmosphere Wednesday, the Grade 10 student was able to provide some context for students to help her fellow classmates understand what it’s like to get that diagnosis no one wants to hear.

Just days into her Grade 9 year, Heffernan was diagnosed with acute lymphoblastic leukemia with the rare Philadelphia chromosome.

“Those are just some fancy words for a type of blood cancer, with an abnormal chromosome attached to it,” Heffernan said matter-of-factly.

Deep into a three-year treatment plan, Heffernan spoke from the experience one can only have when they’ve bravely stared cancer down. She said battling cancer is like walking unexpectedly into a shoot off and having nothing, except optimism, to help you fight.

“Within the past two years, I’ve been bombarded with tons of new information, new faces, and medical language I couldn’t begin to understand,” Heffernan said. “I’ve spent 300-plus days admitted in hospital, and within those days, I’ve met some of the strongest kids, who, some, are now The most beautiful angels.”

Coming to grips with the limitations forced by the disease and growing up too fast are just some of the sidebar aspects children fighting cancer endure and that’s why Heffernan was happy to see her school support the GWUL tour and Camp Trillium Wednesday.

“Being at camp gives kids a chance to be themselves, and be accepted for who they are, not what they’re going through. Camp gives children back their identity that was once taken when they were diagnosed. “Because that’s how it feels-as if you’re no longer yourself anymore. Going through this experience, truly has changed me as an individual and taught me so much as a person,” she added.

Looking ahead to next fall, Heffernan will be wrapping up her three-year treatment plan. “But that doesn’t mean this fight will no longer be part of who I am. This fight has taught me that good, or bad, nothing lasts forever, anything you’re going through has to come to some sort of an end,” she said.

Also on hand Wednesday to offer students a glimpse via video presentation of some of the activities at Camp Trillium was manager of special events Carrie Arnold. Bringing families back from the brink after diagnosis and treatment and reuniting them through summer time leisure is the goal of the organization.

“It’s not just the patient that struggles, it’s the entire family life that suffers during diagnosis and treatment,” Arnold said. “Camp Trillium is about fun, community, trying new experiences, making new friends and bring the families back together.”

Arnold thanked the students assembled Wednesday, group which included elementary school children from nearby Queen Elizabeth. “You are bringing families back together and you are giving the resources they need to fight the fight and get through it,” she said.