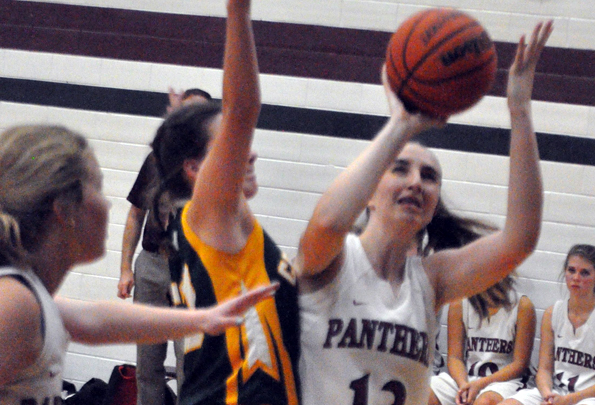 Staying focused - Abby Margetson braces for contract from a Centennial Chargers defender as she attempts a shot under the basket Thursday A t left is teammate Lydia Snider. (Adam Bramburger/Gazette staff)

Once again, the PECI Senior Basketball Panthers and St. Theresa Titans appear on a collision course for Bay of Quinte Conference supremacy — and twice in the next week, they’ll have a chance to size one another up.

Following a pair of wins over Centennial and Quinte in the past week, the Panthers are 6-0 in regular season play. They’re scheduled to face the Titans this weekend at Nicholson’s Crusader Classic, then again for real next Wednesday at home.

“It’s a big game,” said coach Rob Garden. “That will be for first place and home-court advantage throughout the playoffs.”

To put themselves in that position, the Panthers had to make a statement against another one of the better teams in the league last Thursday. They did so in decisive fashion, beating the Chargers 62-33.

The Panthers doubled their opponents’ output in the first half and cruised to a win.

“That was our best game of the year, for sure,” said Garden afterward. “I said to them after the game that was the first time we put together four full quarters both offensively and defensively. We didn’t have any mental mistakes and every single player contributed, which we’ve been waiting for. I think that’s got to be what we have going forward.”

The coach said he thought his team played tough, not giving an inch to the frustrated Chargers in an intense affair. That’s good because he sees as a top-four contender with Centre Hastings, who beat St. Theresa last week, and the Titans.

One player who has exemplified toughness is Abby Margetson. The forward made her first start as a senior against Centennial. A player who might have been described as tentative in past years, she’s come into her own in the post.

“She earned the start tonight,” Garden said. “She’s scoring the ball and she’s got confidence to demand the ball. The have the combination of her, Lydia (Snider), and Alannah (Burris) we’re able to rotate them through and that’s something no other team has. We’re definitely happy with Abby’s progress and there’s more to come from her.”

Scoring came off the rush, too, making the Panthers difficult to stop. Vanessa Willis and Chloe Marshall led scoring with 12 points apiece. All 11 players got points with Emma Lamorre being the next highest contributor with five. Centennial’s Mackenzie Bennett replied with 16 in the loss, while Anne Davidson put up eight.

Garden said he felt the Panthers are starting to really find themselves as the stretch run beckons with three games before playoffs.

“I think they’re really starting to get a sense of purpose and looking ahead to what they want to accomplish. We’ve been a team without any real identity for the first half of the season, maybe due to the fact we’re not practicing as much,” he said. “They’re starting to take that on themselves. This is their game. They wanted to come out and send a message to the rest of the league that they’re the top team — they’re the team to beat. I think they did that.”

At Quinte Monday, the Panthers did little to dispel that notion winning 62-16. This time, it was Snider’s big game under the basket as she scored 16 points on the Saints. Margetson also hit double digits with a 10-point game. Courtney Bolch led Quinte with five.

The Panthers play the Kingston Collegiate Blues at 3 p.m. Friday at St. Theresa to open tournament play, then head to St. Theresa for a 6:30 p.m. tip with the host Titans. On Saturday, they’ll be at Nicholson for an 11 a.m. start against Peterborough’s I.E. Weldon Wildcats.