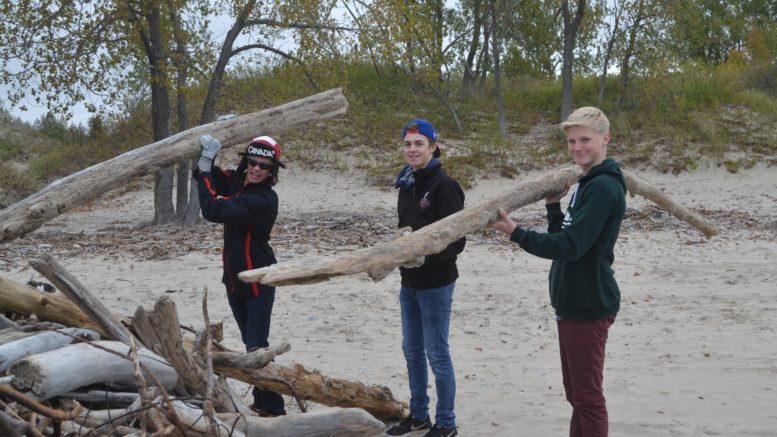 A two-day clean up effort at Sandbanks Provincial Park by volunteers including over 80 PECI students have alleviated some of the marine debris that washed up on shore during this summer’s high water event.

Panthers enrolled in the school’s Venture program were at the Lake Ontario beach front just north of Richardson’s Campground/Lake Shore Lodge area Friday collecting drift wood, plastics of every description, foam goods and aluminum cans as part of the Friends of Sandbanks-Organized clean up efforts to reclaim the beach which was closed this summer to the public.

This weekend’s event at the park was part of the 2017 Great Canadian Shoreline Clean Up effort that has seen over 71,000 kg of garbage, wood and recyclables collected from 12,952 km of Canadian coastline this year.

Park superintendent Robin Reilly said the beach was closed this summer and the amount of debris that accumulated on the expanse facing Lake Ontario was unlike any other season and it was vital to remove the material this fall ahead of next years beach season.

“There was a huge amount of plastic litter and also nail-filled boards and pressure treated lumber, likely from a number of washed out docks,” Reilly said.

“The opportunity for interaction with the schools is highly beneficial to Sandbanks and I hope to them as well,” Reilly added. “We do two or three school projects per year and we try to have them work on environmental projects like tree planting.”

PECI teacher Sarah Vader said the students were put to the task on Friday and didn’t shy away from rolling up their sleeves. “We felt we were able to get quite a bit accomplished but there seems like there’s quite a bit of work to do.

Vader said the students appreciated being able to help a non-profit Friends group and to be part of a bigger collective effort like the the Great Canadian Shoreline Clean Up was meaningful.

“It was not just a day at the beach for them,” Vader added.

“It was a lot of work with so much that needed to be cleaned up but with so many of us it is it made it easier to do the job.It was fulfilling to help out especially since that beach was closed all summer,” Grade 9 student Gracie Burris said.

“Going to sandbanks gave us the opportunity to give back in our community and help preserve such a wonderful place in Prince Edward County,” added Grade 10 Panther Emily Kraemer.

Collection totals for Saturday’s public event have yet to be tallied.