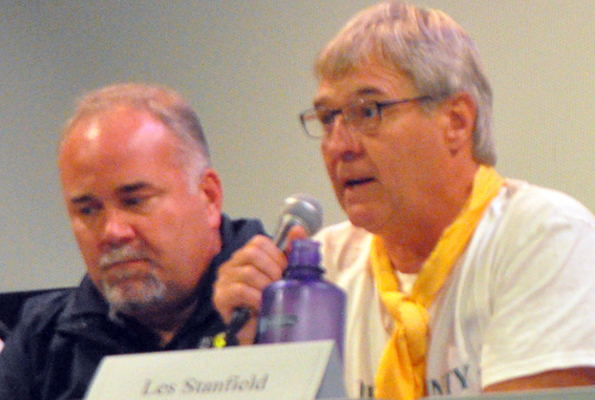 Residents, experts weigh in with their fears about project’s construction, operation on south shore

The potential impact of construction and noise from the White Pines Wind Project on human health and the natural environment was of prime concern at a rally at the Regent Theatre Sunday.
A crowd of more than 200 people learned from scientists studying the impacts of industrial wind projects that there are potential pratfalls ahead should the nine-turbine project proceed in South Marysburgh and Athol.

Early in the presentation, Wind Concerns Ontario president Jane Wilson discussed a developing legal battle in Chatham-Kent where landowners near an industrial wind project claim they have black water coming from their taps that has mineral and chemical levels exceeding Ontario drinking water standards. The landowners say construction activity at the project site and low-frequency sound from the turbines has stirred sediments. The developers have rejected that claim.

Doug Murphy, a sixth generation farmer whose family has farmed on Murphy Road for 183 years is concerned something similar could happen near his home along the provincially significant Milford Black Creek Valley. He shared details of some of the observations he’s made about the limestone he farms on.

“This area has many crevices ranging from eight inches to a foot wide, 10 feet deep and up to 20 feet long. These crevices extend on our farm, making it an area potentially unstable for construction. I thought these crevices were all over the county — maybe they are,” he said. “On our land, you’ll see a crack in the ground a foot wide and 20 feet long and you’ll get water running through it. The water will come up a half-mile away somewhere. To the lady who was talking about black water, I can really, really see how that could happen when you start blasting around these areas.”

Les Stanfield has made a living of studying water. A retired fish habitat specialist with the Ministry of Natural Resources, Stanfield developed Ontario’s stream assessment protocol and led the development of the Flowing Waters Information System. Recently, he was called as a geophysical expert in the Environmental Review Tribunal hearings about a wind project on Amherst Island. Stanfield added weight to Murphy’s concerns.

“It’s about water. The wells of anyone living close to the South Marysburgh wind turbines are at risk. They’re at serious risk of either drying up, becoming sour, becoming blackened or becoming poisoned with contaminants that will occur as a result of this project,” he said. “Further, the adjacent wetlands the Blanding’s turtles require and other habitats are at risk.”

Stanfield explained that sinkholes like those Murphy described are found all over South Marysburgh because it is made up of karst, a fractured type of limestone.

“It’s unstable and it’s laying over a deep bedrock of granite. The terrain is also fairly flat, which means that there will be problems with water transport over the surface area.”

He later continued the rock is like a jigsaw puzzle on top of bedrock that floats. He said those who have dug for a post on their property know about that movement. If it is blasted, pounded or shaken during construction, or impacted by infrasound during operation there will be impacts.

“This will loosen the rocks and mobilize the fine materials that fill the cracks. Since water travels along the path of least resistance, underground and surface paths are sure to change.”

Stanfield did acknowledge the question of whether karst topography exists in South Marysburgh did come up in an Environmental Review Tribunal hearing and said opponents weren’t able to prove serious and irreversible harm due to water alterations because very little study or mapping has been done to detail the sensitivity of the landscape to water disturbances.

Nonetheless, he believes the area should have been identified as an unsafe place for turbines at the start of the site selection process and accused bureaucrats of “bending to the political dogma of the Green Energy Act.” Further, Stanfield warned that since South Marysburgh is outside of Quinte Conservation’s source water protection area, there is little protection provided.
To meet the potential problem, Stanfield recommended a group water monitoring plan.

“What would I do as a land owner? The first thing I would do is start to sample your water and have a detailed analysis done for metals and turbidity. That is complicated. I believe a good offence is always a strong defence. I think we should get organized to get a co-ordinated water testing program going.”

Dr. Robert McMurtry, a former dean of health at the University of Western Ontario and an advisor to the Romanow commission on Canadian health care, focuses his research on the human health impacts of low-frequency noise associated with the projects. He said adverse effects are well known, but instead people are dealing “in a world of let’s pretend.” It has been said there aren’t adverse health impacts, those impacts haven’t been defined or haven’t been studied.

“It’s an argument that has been carried on seriously and at great cost by highly paid legal counsel and it’s done all over the world. It’s been remarkably effective at this point,” he said. “The facts of the matter is there are adverse effects and everybody knows it. That’s why there are setbacks in the first place.”

McMurtry argued that while Ontario has regulations in place, people are still getting sick. A prime reason, he said, is the pulsive sound.

The doctor instructed his audience that if they put a finger in their hand and left it still, they wouldn’t feel it after a while. If they take that same finger and change it or rub it against the hand, they’ll notice. The change is key. It’s the same concept with amplitude modulation or the “whoosh, whoosh, whoosh” of a turbine blade.

“The variable gets your attention,” he said, likening it to sitting next to a car with a subwoofer and people can feel the bass vibrating in their chest.
“It’s more than just a sound, isn’t it? That’s the physical nature of low-frequency sound. It’s been demonstrated.”

McMurtry said it has been shown a significant number of people are affected or “highly annoyed” which relates to stress and disturbance.

Recently, he said some advancements have brought hope. A Swedish team has replicated the modulation of turbine noise in a lab. Study volunteers exhibited sleep disturbance and stress. Follow-up studies of people forced to abandon their homes have also been proposed.

“Guess what, I’m optimistic. The truth has power,” he said. “We can do this. I really believe we can overcome.”

Murphy is also concerned about shadow flicker on his home. He’s used a calculator provided by a Danish wind industry association to map the co-ordinates of his home and Turbine No. 4 in the project. The sun sets from April to September behind that turbine.

“I experience motion sickness. This affects my health,” he said.

Murphy said he hasn’t received any satisfactory answers while expressing his concerns.

Wilson said he likely won’t receive a response after construction either. Through the Freedom of Information Act, Wind Concerns Ontario requested through Ontario’s privacy commissioner all complaints the Ministry of Environment received between 2006 through 2014 regarding noise and other effects from wind turbines. Some 3,200 reports of noise, vibration, and other effects were turned over.

Of those reports, more than 50 per cent received no response from the government, Wilson said. Some 31 per cent got a “planned response” and another 14 per cent a “deferred response.” Only one per cent of the thousands of reports were labelled a priority, she said.

“The process is deeply flawed… There is no acknowledgement, even today, of a problem. There is no learning from these experiences, and no resolution of the problems.”
When asked what people could do to protect human health, panelists held up the idea of water sampling and the possibility of using noise monitoring technology to document potential impacts. One audience member asked McMurtry if a baseline health assessment was wise. He thought it was.

“In a word, yes. Be sure to monitor your blood pressure.”

McMurtry added that the Wind Concerns Ontario web site is one of the best resources for peer-reviewed health-related articles.

Turbine opponents also continued arguing the project will devastate nature. Several speakers spoke about how turtles are still travelling around the project area with the warm weather. Cheryl Anderson, a past-president of the Prince Edward County Field Naturalists and the Prince Edward Point Bird Observatory is also worried the county might soon be home to a terrible sight with birds killed. She spoke of a video of an eagle nest being destroyed in southern Ontario. Just last week, Anderson said she spotted two juvenile bald eagles on the south shore.

“I’m afraid we’re going to experience a similar horrible story here in the county when young eagles encounter 50-storey turbines on their way from their nesting site near Big Island to South Bay,” she said. ‘Evidence of raptor migration was presented to two ERT tribunals but they failed to see the danger. It makes me shake my head in disbelief. I have to ask why the Endangered Species Act exists if it is continuously ignored.”