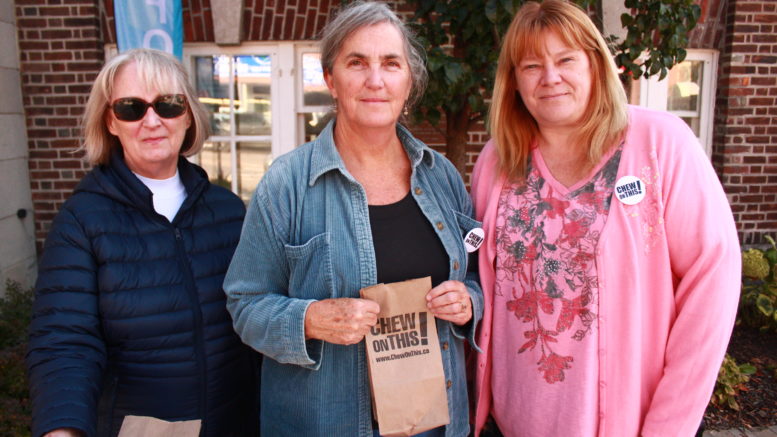 From left, Ellen Brownbill, Diane Milan, and Kelly Knott took part in the Chew on This! poverty awareness campaign Tuesday afternoon outside the Picton Library.

Poverty and its impacts were front and centre this week.

Tuesday, Oct. 17 was the International Day for the Eradication of Poverty and local organizations came together to raise awareness through the “Chew on This!” campaign.

Awareness events took place in Picton and Wellington during the lunch hour on Tuesday with volunteers sharing snacks in exchange for conversations about poverty, food insecurity, and the need for a federal anti-poverty plan. The event is held in association with the Dignity for All campaign organized through not-for-profit organization Canada Without Poverty, and advocacy group Citizens for Public Justice. Local groups partnered with the Hastings Prince Edward Poverty Roundtable to bring the campaign to Prince Edward County.

Outside the Picton Library, County Foundation Vital Signs co-ordinator Diane Milan, Ellen Brownbill of the Picton United Church County Food Bank, and Alternatives for Women violence against women community counsellor Kelly Knott shared information with members of the public. Lunch bags containing an apple, a magnet, and a postcard outlining the need for a formal plan to fight poverty were also distributed.

Poverty has many impacts, but one of the most significant impacts is food insecurity, Milan said. The foundation’s Vital Signs report indicates approximately 10.6 per cent of individuals over the age of 12 in Hastings and Prince Edward counties has faced some level of food insecurity. It’s estimated that 860,000 people in Canada access food bank services each month.

“Poverty is a root cause of that insecurity,” said Milan.

Milan said the focus of Tuesday’s events was spreading awareness to members of the public about the level of food insecurity here.

“Prince Edward County in particular has a food insecurity rate of about 11 per cent — so we talk about that being about 2,500 people in the county that, at some point, don’t have enough to eat,” she said. “That number is shocking.”

Milan said food insecurity rates continue to rise despite some good work in the community including food box programs, community gardens, and cooking classes. She said steps have to be taken to address the root of the problem, which is often poverty or isolation.

“It’s particularly prevalent in Hastings and Prince Edward counties because we are so rural, so there is a real issue of mobility,” said Milan. “…Poverty is at the root of this and the Chew on This campaign really looks at what we can do to eradicate poverty and then eradicate the things that come out of that like food insecurity.”

Milan said Vital Signs is currently undertaking a collective impact project that would assess the work already being done by local organizations to address the issue. She said the aim of the project is to tackle the problem in a systemic way.

“If we each are doing our own isolated bit — if we have the food banks working here, the family health team working here — you never tap into the ability to work collectively and really make a change,” Milan said.

The project began in September and is being led by the County Foundation.

It’s not just organizations who can get involved. Milan said individuals can make a difference in a number of ways. A list of local organizations currently working to combat food insecurity is available through the vital signs report and Milan said those groups need all the volunteers they can get. Residents can also seek programs and services online at www.foodaccess.ca.

“Really what we’re talking about today is just awareness, to know that this is even an issue in our community and to be open to looking at solutions,” she said.

Part of the awareness campaign is also a call for a federal anti-poverty plan. Dignity for All has created a model national anti-poverty plan. The plan has three main policy goals which target six areas: Income security, housing and homelessness, health, food security, early childhood education and care, and jobs and employment.