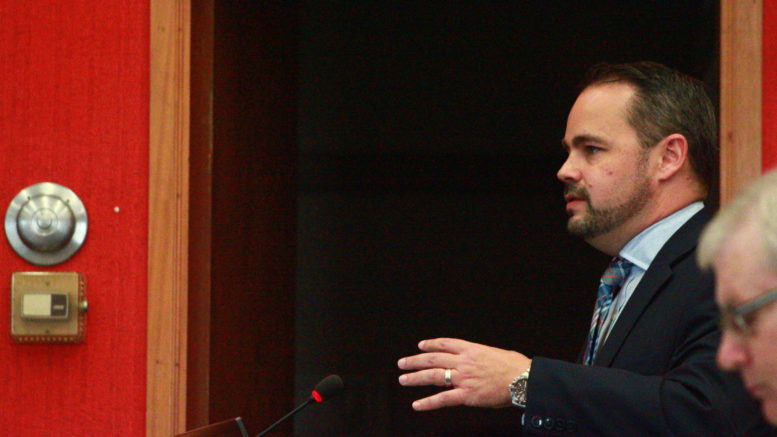 Councillors backed a resolution of support for a proposed increase in HST that would assist municipalities with infrastructure costs.

Association of Municipalities of Ontario (AMO) senior policy advisor Matthew Wilson gave councillors an update on the Local Share plan during last week’s committee-of-the-whole meeting. The committee supported a resolution confirming Prince Edward County’s support of the plan. It will go forward to council on Oct. 24 for approval.

AMO’s proposal is to add one per cent to the 13 per cent HST, with the additional tax being dedicated to infrastructure funding. After rebates for low-income Ontarians and administration costs, the plan is projected to produce $2.5 billion annually. The dollars would be collected at the provincial level and be redistributed to all municipalities based on an allocation formula. For Prince Edward County, it could mean an additional $6.58 million per year in additional infrastructure funding.

The plan was presented to all major party leaders in August and all three rejected the concept.

Last Thursday, Wilson said it’s a $4.9-billion challenge shared by 444 Ontario municipalities and one AMO believes it will take time to bring party representatives on board with.

He said the Local Share concept can be part of a long-term solution to municipalities’ infrastructure woes.

“What we’re all about is really imagining a prosperous future for our communities,” said Wilson. “How can we find a path towards meeting the needs we know we have, addressing infrastructure deficit, and trying to manage, in a better way, some of the property tax increases people face across Ontario.”

He said the plan has been put together over the last couple of years, beginning with AMO member consultation back in the spring of 2015. After spending time in working groups, working with special advisors, and distilling options from fall 2015 until now, AMO has begun to present the Local Share plan to its membership.

Wilson said there were several guiding principles for the plan. It had to be strategic and forward-thinking, it had to be flexible, accountable, and transparent. It also had to be fair, equitable, and sustainable. He said the one per cent increase in HST was measured against 44 other options, including a one to 10 per cent municipal fuel tax, income tax, and a new vehicle registration fee.

“We put all those through a filter to narrow down some of the options,” Wilson said.

Ultimately, Wilson said AMO landed on the one per cent increase in HST. The additional tax would fund roads, bridges, and transit and help reduce pressure on property tax bills, he said.

Wilson said it’s a bold step, but one that may be necessary given the province’s finances. The 2017 provincial budget shows debt of $341 billion with the provincial financial accountability officer projecting further deterioration. He said with that in mind, one has to question the likelihood of additional financial help coming from the province.

“When you’re at a negotiating table, you also have to understand the interests of the other side,” he said. “… The long-term outlook for the provincial financial situation is not fantastic.”

With the Local Share plan, Wilson said municipalities could diversify their revenues, reduce the $4.9-billion infrastructure gap by half, and could help lessen municipalities’ vulnerability to policy chances at the federal and provincial levels. He said it would be predictable funding that could facilitate long-term financial planning for infrastructure.

Wilson said there would be a sliding scale approach to the distribution of the funding that would be calculated per household. In the County, it could represent an additional $6.58 million annually for infrastructure work, he said.

Mayor Robert Quaiff sits on the AMO board of directors and is chair of the Eastern Ontario Wardens’ Caucus. He supported the resolution, saying municipalities are often told to think outside the box.

“This is basically what AMO has done, they have thought outside the box,” he said. “… I look at $6.58 million coming into Prince Edward County, I think that’s a win for us for sure.”

“This is a problem that we have to start taking seriously,” he said. “We talk about it every year and nobody else has come up with an idea to fix it.”

He suggested the plan could at least begin a dialogue with the province.

While the majority supported the resolution, those opposed to the motion spoke of affordability.

“I don’t think this is thinking outside the box at all and I don’t think it’s something new,” said councillor Dianne O’Brien. “It’s what we always do, we always go back to the taxpayers and raise taxes.”

She said supporting the resolution was tacit agreement to raising taxes.

Councillor David Harrison said he wouldn’t support adding to the provincial sales tax. He said the price of goods and services increases every year, which translates into increasing annual tax revenue for the provincial government. He argued those dollars should be enough.

“There’s only one cow to be milked here and it’s the taxpayer,” he said. “At the end of the day, I can’t support it.”