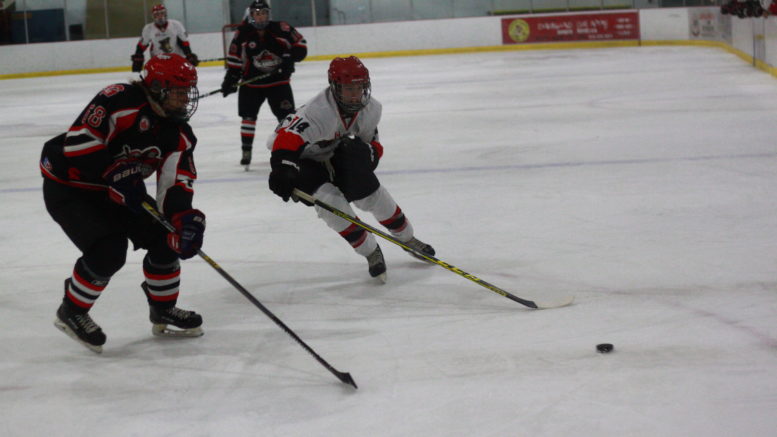 Gananoque's Lucas Sanders and Picton's Brayden Bertrand race to a loose puck during the opening period of last Thursday's 6–1 win.

It was a big week for the Picton Pirates, who have now collected four wins in a row, including a 5–2 road victory over the Port Hope Panthers.

The Pirates took a big 6–1 victory over Gananoque on Thursday night before handing the Panthers just their second loss of the season in nine games on Saturday. The team followed up with a 7–5 win over the Islanders on Sunday night.

Pirates coach Chris Masterson said the team is feeling positive about their 6-3-0-0 start to the season, but knows there are still improvements to be made.

“We know we still have a lot of work to do, there are things we need to tighten up — consistency of effort is the biggest thing,” he said. “But, overall, we’re happy with our 6-3 start.”

Picton didn’t waste any time getting on the board on Thursday. With Gananoque’s Josh Kurish in the box for interference at the 4:23 mark, the Pirates headed to man advantage. Less than a minute later, Justin Arnold collected the puck down low after a wide shot and tucked it between the post and Islanders goaltender Josh Rowden’s skate.

The 1–0 advantage held through the majority of the frame as the Pirates hemmed the Islanders in their own zone for prolonged stretches. With less than three minutes left in the period, Jaydon Wood’s solo effort made it 2–0 for Picton when he drove to the front of the Islanders’ net and buried a backhand.

The Pirates looked to take a stranglehold on the game in the second. Just 1:18 into the frame, Jordon Cannons made it 3–0, but a quick response from Kurish came at the 2:59 mark to cut the lead back to two.

Noah Brant got the goal back 13:36 into the period and the Pirates took the 4–1 lead into the third.

Devin Morrison and Keegan Wayte would round out the scoring in the final frame.

Masterson said it was one of the team’s best games of the season.

“The passing was bang on, every player was moving their feet,” he said. “We played a really quick, up-tempo game — we definitely came out flying and I was happy with our performance.”

The Pirates faced a significant test in the Panthers on Saturday night.

Port Hope opened the scoring 7:24 into the frame on an Andrew Gurr goal. At 12:28, the Pirates were given an opportunity to tie things up on the power play with Port Hope’s Graham Dickerson in the box for holding. On the ensuing power-play opportunity, Arnold connected on a play from Cannons and Nick Kyte to even the score. Less than four minutes later, Will Harrison gave Picton the go-ahead goal with Bailey Matthews and Gerald Bilker notching assists. The Panthers held a 13–8 shot advantage but went into the second period down by a goal.

The Pirates continued their strong game in the second period, outshooting Port Hope 12–9. Cannons scored the club’s second power-play goal of the night midway through the frame with Matthew Scott and Nick Hoey picking up assists. The hot Picton power play continued to work magic, making it 4–1 with a Hoey goal at the 11:54 mark. Kyte and Arnold had the assists. The Pirates carried the three-goal advantage into the third.

“We had a really strong second period in Port Hope,” Masterson said.

The Pirates tallied their fourth power-play goal early in the third with Arnold connecting on a play from Kyte and Cannons.

Port Hope finally responded with a Dayton Kent goal at the 13:18 mark of the third, but that was all the offense they would muster. Pirates goaltender Aaron Young stood tall in the win, stopping 37 of 39 shots. It was the first time Picton had beaten Port Hope in 18 regular season meetings.

Masterson said the Picton power-play has been clicking at rate exceeding 30 per cent. He said it was the Pirates’ key to victory on Saturday night and the unit of Hoey, Cannons, and Arnold seems to be gelling well.

“The third period [Port Hope] came out flying and pushed back on us a little bit, but we knew that was coming,” Masterson said. “We managed to weather that storm.”

It was a blowout that turned into a close contest on Sunday. Coming off an emotional win on Saturday, Masterson said team officials expected an up-and-down game.

Gananoque’s Aiden Foley opened the scoring at 11:42 of the first, but the Pirates had some jump and Cannons tied things up just a minute later. The Pirates continued to pepper the Gananoque net, but were held at bay by Rowden. The Pirates finally took the lead with Hoey scoring a power-play goal with 28 seconds left in the period. Arnold had the assist.

It was all Picton in the second.

Matthews made it 3–1 just 52 seconds into the period. Cannons followed up with a goal 16 seconds later and Wood added a shorthanded marker midway through the frame to make it 5–1. Matthews added another with just over two minutes remaining in the frame as Picton took a commanding lead into the third.

Then things started to unravel.

Wood finally ended the Gananoque comeback effort, firing the puck into the empty net with just three seconds on the clock.

The Pirates out-shot the Islanders 36-26 in the contest.

“Three games in four nights, coming off an emotional win against Port Hope — the first time in 18 regular season games we’ve beaten them — we expected there would be a bit of a letdown,” Masterson said.

He said that showed in the third period when the Pirates stopped moving their feet, took penalties, and began to make some unforced mental errors.

The Pirates will look to continue their win streak on Thursday when they take on the Amherstview Jets. Puck drop is 7:30 p.m. The Pirates then head to Amherstview on Sunday night at 7:30.

Masterson said there will be four important points up for grabs.

“Those are huge games,” he said. “They’re games that could separate the top three from the bottom three and our hope is to come out with four points.”