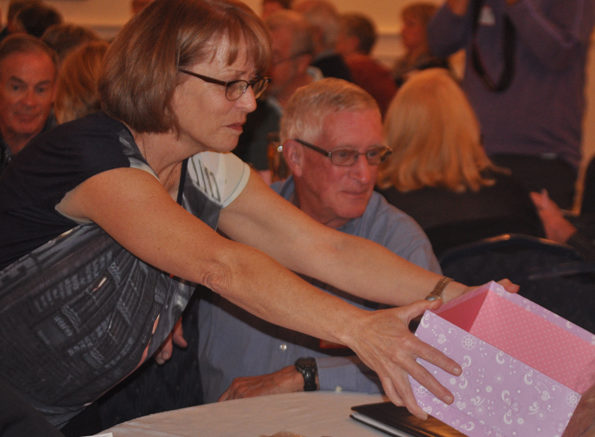 In a matter of minutes Monday evening, the Prince Edward Learning Centre (PELC) had a windfall of more than $10,000 to help adult learners reach their educational goals.

The funding comes courtesy of 100 People Who Care Prince Edward County, a new no-fuss funding organization that met that evening to give out its first set of funding. More than 80 people took the chance to vote for their charity of choice at the Waring House, while organizer Richard Byers estimates another 15-20 people sent their cheques along, trusting their peers. Making her case – Alice Mennacher states why she thinks the Prince Edward Learning Centre should be funded. (Adam Bramburger/Gazette staff)

ity rules and a host of people can maximize their impact.

“The whole secret of this group is going to be that we have no expenses. All the proceeds, 100 per cent, are going to the charity you choose. We don’t have any head counts, presidents, or secretaries. Nothing,” he said. “One of the points of this program is bang, bang, bang, vote and you’re home.”

After the participants shared a half-hour of social time, Byers read the rules.

“We are about giving to our community, not taking from it. Membership is a commitment by each of you to give at least $100 four times a year to a local charity here in Prince Edward County, selected by you members at a meeting like this,” he said. “You must be here to vote and you must all support the winner, whether you are here or not.

Each member was allowed to nominate a registered charity and, if called upon, be able to speak on its behalf. Three charities would be pulled from a hat and their champions given three minutes each to speak. The winning charity wouldn’t be eligible again for a year. The runners up, half a year.

The nominees for the inaugural vote included PELC, the Picton United Church County Food Bank, the Matt Stever Rotary Fund, Reaching For Rainbows, the Loyalist Humane Society, Festival Players of Prince Edward County, and Hospice Prince Edward. From there, the Matt Stever Rotary Fund and Festival Players earned the right to have their stories heard.

Mary Stever spoke first on behalf of the Matt Stever Fund. She explained that her son Matt was fatally injured in a motor vehicle accident in Taiwan about 10 years ago. People in the community raised money to allow the Stever family to take care of his medical bills and to fly him home, but he died in Taiwan.

“We took the money that had been donated and put it into a fund for children in the hospital or when there’s been an accident,” Stever said. “It’s only for the parents of Prince Edward County and it’s set up for children. If you have a child at Sick Kids you can apply to the fund and it will give you money.”

The applications are available through the Rotary Club of Picton’s web site. Stever said the only way the fund is filled is through community donations and there are many who aren’t aware of it.

“I nominated the fund so that we could bolster it and, as well, so the community will know more about it. Many of the nurses at the hospital know, many of the doctors know, and we can put names out there for people but not a lot of people know about it.”

Philip Knox spoke second, on behalf of Festival Players. He said he and his wife moved to the county in 2015 and upon reading the County Community Foundation’s Vital Signs report, they learned about several issues like food insecurity, transportation, and high teenage pregnancy. Knox argued that entertainment can be a vehicle to address those problems.

“The more things we have in the county to bring revenue to the county — wineries, breweries, and restaurants crewe more employment for county people. That’s the reason we think this particular charity deserves your vote tonight.”

Knox spoke of a new management group at Festival Players that has brought a new storefront performance space to Wellington’s Main Street that attracts visitors. It also has big plans for next year, including a renewed focus on teaching and a young company to develop future talent. A steady summer festival can have a huge impact, he argued.

“Tourism Ontario, who looks at these types of festivals and these types of things that come into communities, has data that say this found add hundreds of thousands of dollars of income to the community.”

Reluctantly, Alice Mennacher was the third person to rise to address the audience.

She didn’t really want to talk, but believed in the power of the work PELC is doing right now.
“I’m not really a good public speaker. I was almost hoping I wouldn’t be chosen so I wouldn’t have to speak, but I’m really pleased I did,” she later said. “It’s fabulous. I’m so happy I almost want to cry.”

In making her pitch, Mennacher talked about how PELC is an adult literacy centre that supports more than 100 adults, many of whom are under age 30. It helps those students complete high school requirements, prepare for college and apprenticeships, and gain skills for employment. In her conversations with educator Lori Farrington, a long-time friend, Mennacher learned PELC is about more than just books and tutoring.

“They know people can’t learn when they’re hungry, so they offer healthy snacks during the day and they try to cook two or three meals during the week to offer to their students,” she said. “If students are stressed about their housing and can’t pay bills, they help with financial planning and budgeting and access to filing income tax and energy programs to reduce bills.”

She added staff are cognizant of students that may be struggling with mental health or other life issues and are good at finding transportation to doctor’s appointments and creating wellness plans.

“All of this takes extra time and money, which is really supported by their own fundraising,” she said. “So many people think literacy is about learning to read and write, but at Prince Edward Learning Centre literacy is about accessing services, participating in our community and culture, having hopes and dreams, and putting them into action.”

After a vote by secret ballot, PELC was victorious. Contributors were given seven days to turn in a cheque for $100 or more.

Farrington was thrilled with news of PELC’s selection.

“It’s huge. We were really pleasantly surprised. The 100 People Who Care is made up of community members, so it’s recognition by the community for what we do. That’s very validating.”

Farrington confirmed the money will help with extensions of service like the ones Mennacher mentioned. Those extras may not be covered by core funding, but they are important.

“Oftentimes in the past when retention was an issue, we;d hear it was things were getting in the way of education because you’re hungry, you have mental health issues or your housing is tentative. The first thing to go was education,” she said. “We feel the thing that needs to be maintained is education in order to make real changes in their lives.”

Membership in the 100 People Who Care chapter remains open and those interested in joining are encouraged to e-mail 100peoplewhocarepec@gmail.com.The next meeting will be Jan. 18.