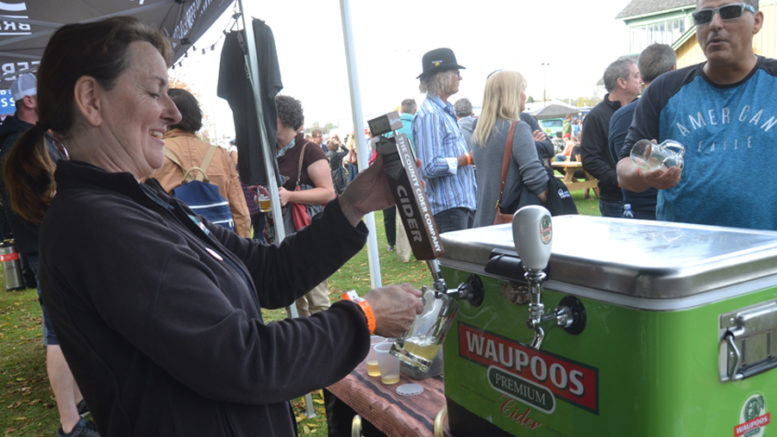 Perfect Pour - Jenifer Dean, of the County Cider Company grabs a glass of her product to allow a potential customer to sample during Saturday’s Homegrown festival at the Picton fairgrounds. (Jason Parks/Gazette staff)

The Crystal Palace was a crafty kind of place on Saturday as hundreds flocked from all over the Quinte area for first ever craft beer, cider and mead celebration in Prince Edward County.

If the sheer volume of craft beverage and associated goods fans onsite Saturday are any indication, another hit festival is about to become a mainstay in the Prince Edward County culinary calendar.

Over 20 craft cider and beer producers were offering glasses of their very best trappings and were joined by a number of local food vendors, farmers, condiment creators and a distillery in a crowd-pleasing complement of goods that went perfectly with the unseasonably warm mid-October day. 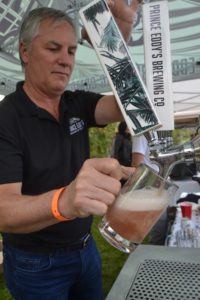 Nat Wollenberg, lead liaison with the Greater County Area (GCA) group of brewers told the Gazette that well over 1,200 people had filed into the Fairgrounds area and the day was barely half over, proving this is an event that has legs.

Organized by local brewers in partnership with the County of Prince Edward and presented by Empire Productions, Wollenberg said the GCA was thrilled with the event as its first attempt of uniting and celebrating area producers of refreshing beverages.

“The County is really going to be a hot spot for brewing in the coming years and this is just the tip of the iceberg…it’s been a great event for our first year,” Wollenberg said.

The event also marked the first food-and/or-drink festival where the county’s wine industry wasn’t front and centre and while no one is ready to dethrone one of Canada’s quickest growing wine regions just yet, most everyone would agree it’s nice to have a variety of choices when it comes to locally produced beverages.

“(Craft breweries) are natural progression for a tourism-based economy like this and if you don’t like wine, there’s a good chance you are going to like beer. Our agriculture roots are strong in this part of the province and while we only have eight breweries in Prince Edward County currently, the GCA are up to 21 from Cobourg to Kingston,” Wollenberg said. “We feel we’ve got something really special brewing here in Prince Edward County.”

Craft brewing is a developing industry in Prince Edward County and among the freshest faces working taps on Saturday was Aaron McKinney of Prince Eddy’s Brewing Company.

Between pouring glasses of Chin Dropper Blonde Ale and Milk Shaka Stout, McKinney told the Gazette the last five months have been fun and exciting.

He said that while winery tours are still popular, a circuit of breweries doting the county countryside have made brewery tours a new hit weekend past time.

“We’re finding that the brewery tours are starting to get as much traction as the winery tours. People want to come and explore everything Prince Edward County has to offer,” McKinney said.

While a road map might be needed to find each Prince Edward County brewery, a taste map is certainly necessary when it comes to testing Prince Eddy’s unique creations.

While the four flagship brews have gained plenty of fans in the brewery’s first five months of existence, the seasonal blueberry wheat ale was a popular pour on Saturday.

And that’s not exactly a common variety one can pick up at a local Brewer’s Retail outlet.

“I think all the craft brewers in the county that are up and running recognized the same thing- that there are 45 wineries and one brewery here and there was a huge gap to be filled. With the rise of craft beer in popularity, it made sense to be here. And, the more breweries there are, the more people are getting educated and the more the market share is being taken away from the big multi-national brewers and that helps everybody,” McKinney added.

On the cider side, Jenifer Dean of the County Cider Company Estate Winery was having a great day- even if the apple growing season hadn’t been as such.

“With the early rain, it was not a great year for growing apples. The pollination was poor and it was a hard year to plan for spraying. Even getting the tractor in the orchard was a challenge,” she said.

The only thing missing from the festivities on Saturday was the smile of the godfather of Ontario craft cider Grant Howes.

Dean agreed that her late partner would have loved the opportunity to talk cider, meet with fellow vendors and promote Prince Edward County to the throngs of visitors.

“Grant would have loved this event today. He would have been so happy to see some many different producers here today and I think he would’ve taken some pride out of an event like this and bringing people here to the County,” she added.

Among the hit concoctions Dean was pouring included a raspberry sour cider that was made with fermented golden raspberries.

Attendee Tim Clapp said he’s developed an appreciation for local craft brews and ciders in the past year and was excited to see them all in one place Saturday.

“It’s really cool to drive around the county, check out all these places and try out their new varieties,” Clapp said. “The one thing I like is that you pay a visit to these tasting rooms, you see other people from other breweries and it’s not a competition, it’s more of a collaboration.”