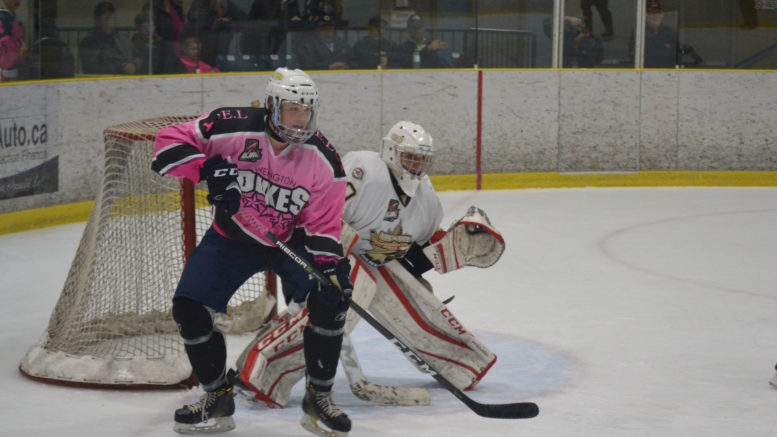 It’s still October but you might have a hard time convincing local hockey fans in Prince Edward County of that fact.

On the ice at Essroc Arena this weekend, the Wellington Dukes managed a split of two home games that saw the intensity level near playoff proportions.

On Friday, the club skated past the visiting Pickering Panthers 6-1 in a contest where the carbon fibre clubs were wielded without concern and the clubs combined for 16 stick infractions.

On Sunday, the first salvo in the Battle of Loyalist Parkway went the way of the Trenton Golden Hawks and coach and heneral Marty Abrams as the visiting arch rivals shaded the host Dukes 5-3 with an empty netter thrown in for good measure.

The loss, just Wellington’s second in regulation this season, was the first time in 13 games the club has failed to gain at least a point through 60 minutes of play.

Their last such loss was a 3-2 shading at the hands of the Toronto Junior Canadiens over a month ago at the Governor’s Showcase in Buffalo, New York Sept. 20 so it’s not surprising that the Dukes (12-2-5) have basically gone and hid on the rest of the Eastern Division, amassing 29 points through 19 contests.

Even with the loss to Trenton, Wellington has an 11 point spread on the Golden Hawks although the second place club has three games in hand.

Wellington looked destined to play its seventh game requiring overtime on Sunday afternoon as the contest was tied 3-3 inside the final ten minutes of play.

But Trenton, perhaps realizing they needed a positive regulation result especially after dropping a 4-3 decision to Newmarket at home Friday, dug deep and it was veteran Max Ewert beating Wellington starter Jonah Capriotti with just over six minutes left to move Trenton ahead 4-3.

Despite opportunities to even the score, Will Rawski came up big for the visitors and Cal Walker salted the game away with under a minute to play and the Wellington cage vacated for the extra attacker.

The best crowd of the season, most of them Dukes fans, filed out of the Essroc Arena disappointed as the Golden Hawks extended their wining streak in Wellington to four games.

“At the end, you have to tip your hat to them,” Wellington  general manager and associate coach Ryan Woodward said. “It was a solid game by both clubs and each team had opportunities to carry the play. It was a hard fought battle and Trenton made the most of their opportunities.You can’t give good teams like that the opportunities that we did.”

The game started on a bit of rough note as Nelson Powers and Trenton forward Scoley Dow collided at centre ice while a Trenton clearing attempt was airborne through the neutral zone and both players were tracking it.

Dow fell in a heap, taking the worst of the collision and the seldom seen OJHL officiating crew (in these parts, anyway) of Darryl Dykes and Steve Gallagher determined Powers deserved a major penalty for his non-avoidance of the distracted Trenton player.

But Wellington wound scoring the only goal of the major penalty with Andrew Rinaldi potting a shorthanded marker off a rush that clanked the inside of post behind Rawski at 4:30 of the first.

Caleb Bowman would get Trenton back to even, firing past Capriotti at 8:49 and then the Golden Hawks would move ahead thanks to a power-play goal by Micheal Silveri at 14:22.

Wellington would score the only goal in the second as Teddy McGeen bagged his third of the weekend, converting a nice Colin Doyle feed at the six minute mark. Windsor, ON native Teddy McGeen had five points in two games for the Wellington Dukes this weekend. (Jason Parks/Gazette Staff)

Tied at 2-2 at the mid-way point, Wellington suffered the loss that likely hurt them the most when Mark Kennedy and Rex Moe looked like they were ready to tangle in the Wellington end as the puck was moved up ice.

For some strange reason, Kennedy paused to remove is own helmet after doffing his gloves and the OJHL officiating crew chose that moment to engage the players to snuff out any potential fisticuffs.

Kennedy was handed at gross misconduct for removing his own helmet and Moe would come back to set up the eventual game winning goal.

Ewart scored his first of two in the third to give Trenton a brief lead but Rinaldi scored his second of the game at 8:40 to make it a 3-3 contest.

Wellington was full value for their win Friday despite Pickering’s attempts to practice their wood chopping technique in the second period.

Down 1-0 after one thanks to a Mitchell Martan tip in goal partway through the first, Pickering took four straight slashing penalties in the second period and the Dukes power play sprung to life, scoring three goals with the man advantage to build a 5-1 lead.

“It was a really chippy game and I felt we were too undisciplined and got too involved in the battles after the the whistles, Woodward said. “That’s something we addressed internally and something we want to clean up.”

In the third, Wellington’s special teams unit sprang to life as Rinaldi made a spectacular feed on a 2-on-0 break to McGeen for his second of the game.

McGeen led the way for Wellington with four points while Martan had a goal and three helpers.

Creed Jones made 20 saves in picking up his third win of the season.

Wellington will have a busy weekend of road games starting tomorrow evening as club will be in Lindsay to tangle with the Muskies at 7:30 p.m.

On Saturday, Wellington visits the Georgetown Raiders in a battle that sees the East Division-leading Dukes take on their counterparts from the West.

Finally, on Sunday, the Dukes and Pickering Panthers renew hostilities at the Pickering Recreation Complex.

‘Round the ‘Roc: The club honoured Abrams ahead of Sunday’s game with a pregame presentation that was warmly received and recapped his nearly two decades as Coach and General Manager of the club…The Dukes hosted is annual ‘Pink in the Rink’ Cancer Research Fundraiser Sunday and auctioned off the pink sweaters the players were wearing…After going pointless for the Brooks Bandits in eight games to kick of their season, newcomer Geoff Lawson has a pair of helpers in his first two games as a Wellington Duke…Sunday’s attendance was just shy of 600.