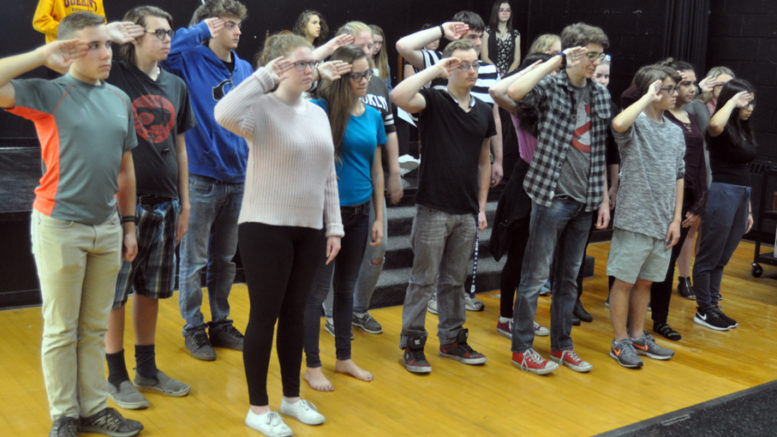 A salute to local history - PECI drama students practice their salute during a scene in Vimy and the child soldier from Hillier where the township’s fallen veterans are remembered. The student are working on staging the play for community and in-school performances for Remembrance Day. (Adam Bramburger/Gazette staff)

The regimentation of following scripts and nailing choreography steps can be a lot to ask of a high school student early Monday morning, but PECI drama students have been learning a different standard of sacrifice lately.

Matthew Sheahan’s first-period senior drama class is working toward staging Suzanne Pasternak’s play Vimy and the child soldier from Hillier Nov. 9 at Hillier Hall and Nov. 10 at PECI. The story revolves around the 19 young men Hillier lost in the First World War and, in particular Robert Clarence Thompson, who enlisted at age 13.

Ruby Gaudett is playing the role of Thompson’s girlfriend and she said she has a lot of empathy for that character, played by Callum Macdonald and Quinn Snyder. Her character was deeply affected by his determination to fight for King and country and, upon reflection, she was too.

“It’s not something you think about today, so it’s just a very opening experience,” she said. “It’s a little hard to put yourself in that experience. You can’t really relate to it. I think we just kind of take things for granted these days. You really have to think about that and how people our age and younger — years ago — were sacrificing their entire lives just because they wanted to.”

Snyder said even walking in that role on stage offers a different perspective.

“It’s difficult. There’s a power about it. When you’re playing a character and he’s come back home, you know that you have done things that no man should ever have to do. There’s a weight to that.”

Some of that power comes from the research Pasternak has done to complete her story. Much of the material is derived from letters Thomas wrote to his mother. Sheahan added that rather than simply talking about the movements and battles on fronts in far-away Europe, Pasternak focused her writing on how people were affected at home.

“It’s really more of a family story,” he said. “It’s mores about the impact on what is happening here with the family than on the soldiers themselves, but it has a good balanced view.”

Thomas was so dedicated to his cause that despite returning to Canada three times — a couple times because someone found out he lied about his age — he kept returning to fight. Sheahan agreed it’s a powerful story for students.

“When they hear that they think “What!?’ because every student in here is older than that. They can’t fathom someone being 13 and going off to war.”

The project came about as Hillier resident and theatre promoter Conrad Beaubien was looking for someone to do the piece at Hillier Hall to mark the 100th anniversary of the Battle of Vimy Ridge. He was speaking with Sheahan’s partner, Mihal Zada, who mentioned the high school drama department always does something for Remembrance Day.

“It was a mutually beneficial arrangement,” Sheahan said. “I really like to use theatre for practical reasons and drama and education. This is one of the best examples of how you can use drama to teach history and have students talking about local history.”

Pasternak was fully on board with the idea and she has been instrumental in altering her script for teenage actors. Because it is a class project and Sheahan strived for inclusion of all students, some compromises were made from the original script to stage as many students as possible. Sheahan said the play may have appeared cleaner with simply eight characters, but they’ve made the play work with more people involved.

Macdonald and Snyder both commented they’re excited by those changes because it allows them a chance to see scenes drawn up as they go along and incorporate new ideas into a production no one will have seen before.

Another instrumental figure in the production is Cori Goodman. The Grade 10 student performed the show with Pasternak in the County Storytelling Festival series and has stepped forward to be music director.

“If it wasn’t for Cori, I might have been afraid to do this because I’m not a music teacher and I’m not a musician. Cori, being as young as she is, has done an amazing job to learn the music, teach the music, and keep everyone on task musically. It’s a huge task, but she’s been up to that task and has been doing an amazing job.”

Pasternak has also visited the school on several occasions to work with Goodman and the actors.

Macdonald said he hopes people will take away an appreciation that people from Prince Edward County fought in the great war and urge them to think about that for Remembrance Day.

Gaudett hopes to provoke audiences to consider what they’ve witnessed.

“You want people to leave with an emotional response to it because that’s what sparks conversation. Our goal is if they believe, and they’re like “Wow, I’ve never seen something like that before, they’re going to think about it and talk about it. That’s a powerful thing to do as an actor.”