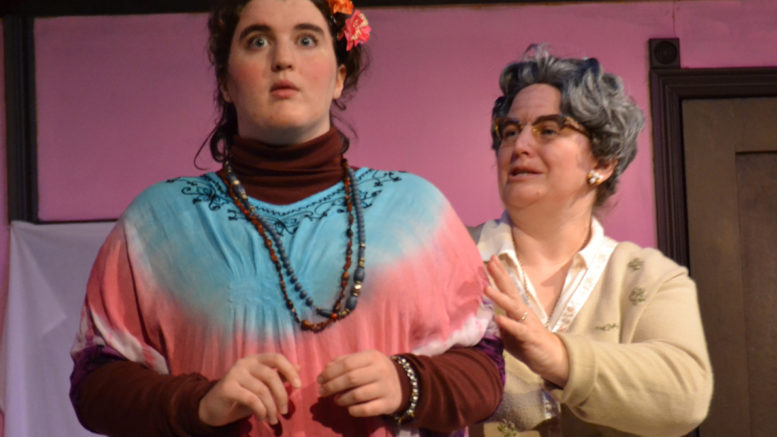 Just in time for the lead up to All Hollows’ Eve, Prince Edward County Theatre kicks off their tenth season with Ira Levin’s spine-chilling dark thriller Veronica’s Room, concluding this weekend at Mt. Tabor Playhouse.

Those brave enough to enter Veronica’s room will finds a harrowing labyrinth of suspense, entwining fantasy and reality.
From the mind that crafted Rosemary’s Baby, the story begins in 1973 when Susan (played by Elizabeth Mulridge) and her boyfriend, Larry (Adam McGowan) have been enticed to the Brabissant mansion by the Mackeys (Jennifer Sills and Derek Mendham) a charming, elderly Irish couple who are struck by Susan’s strong resemblance to Veronica, the long-dead daughter of the family for whom they work.

Veronica’s room has been untouched by time and left exactly as it was in 1935.

The mystery deepens as twist after twist unravels, leaving the audience to doubt the constraints of time and space and wonder how this mystery will reach its surely gruesome end.

The first of three productions PECT will offer in its 10th anniversary season, director Bill McMahon said the timing was right for Veronica’s Room, a masterful and jarring suspense piece that’s been described by reviewers as an “elegant thriller.”

McMahon said the production is an actor’s delight given that its play inside of a play and the four person cast each play a different character in the second act.

“The best thing about Veronica’s Room from an acting prospective is that it gives the actors a chance to portray different characters and allows them to search out they are looking for in each scene,” McMahon said.

With each actor playing different roles, it’s a difficult task to classify each performance without giving too much of the plot away but the reciprocal nature in which Sills and Mendham transition from each act provides this production its legs.

Sills brings a power and a domineering darkness to her performance while Mendham’s veteran presence makes it clear to anyone watching that he’s been on the boards a time or two in his life.

Somewhat of a newcomer, Mulridge’s hysterics are genuine.

McMahon explained that Mulridge had played some minor roles in recent years including The Rocky Horror Show and Waiting for the Parade but this was her opportunity to step into the spotlight.

“She’s very coachable and open to suggestion and instruction and realizing that some times, there is a better way,” McMahon said. “Her and I going through the rehearsal we needed to find that sense of urgency, that ‘What is going to happen to me next?’ and I think we did.”

Out of practice for some time, Adam McGowan makes his debut with PECT playing a particularly slimy set of characters to the point its surprising the Mount Tabor stage doesn’t need to be hosed down during intermission.

Veronica’s Room concludes this weekend with evening performances on Friday and Saturday night (7:30 p.m.) and a matinee Sunday (2 p.m.) Tickets are $17 in advance at Books & Company and the SideStreet Gallery and $20 at the door.