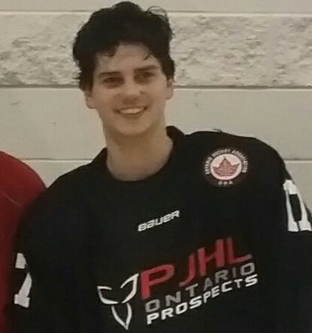 Skating among nearly 160 of the best 16- and 17-year-old players in the province, Devin Morrison and Bailey Matthews played an instrumental role in helping their Team Black to a 4-2 win over the Pollock Division, which includes teams from the Lake Huron area.

The Pirates connected on three of their team’s four goals. Morrison, a Belleville native, had one marker and two helpers, while Matthews, from Stirling, found the back of the net twice. Following the game, Matthews was selected as his team’s top player.

The Prospects Day allowed young players a chance to skate in one of four games played in front of scouts from colleges and higher levels of junior hockey. Following the games, the players were invited to sit in as guest speakers shared their stories of success in hockey.
PJHL organizers hope to make the day an annual event.