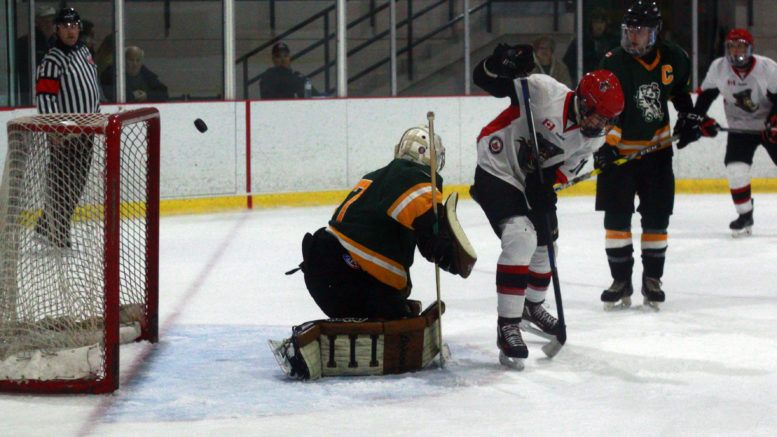 The Pirates took three out of four possible points in two big games versus the Amherstview Jets this week.

Despite a great effort the Pirates collected just a point from a 3-3 tie with the Jets on Thursday night, but played smart in a 5-1 win over Amherstview on Sunday evening.

“Thursday, I thought we played a heck of a game,” Pirates general manager Chris Masterson said. “The guys were really moving their feet, passing the puck well — unfortunately it ended up in a tie.”

He said it was a different story on Sunday as the team didn’t play as well, but were able to come away with the win due to intelligent play.

“We didn’t have a high energy level, but we did the small things we needed to do,” he said.

The Pirates got off to another fast start Thursday, getting good pressure early on. It was a defensive error on the Jets’ part that led to the first Picton goal. Just 2:54 into the opening frame a pinching Amherstview defencemen was caught out of position as the Pirates turned the puck up ice on a two on one. Jaydon Wood slid the puck to affiliated player Owen Dever who found the back of the net to put the Pirates up by a goal.

Under two minutes later the Pirates doubled their lead when a giveaway at the Jets’ blue line turned into another partial two-on-one break. This time it was Devin Morrison finding Jordon Cannons for the goal.

The Pirates continued to generate solid zone pressure, but the Jets were able to close the gap to just a goal at the 13:18 mark with Ty Norman scoring with a quick snap of the wrist on a rush chance.

The Pirates held a 15–11 shot advantage through 20 minutes and headed into the second period up 2-1.

It didn’t take long for Picton to extend the lead. Just 1:56 into the second the Pirates had pressure again. A Wood shot was stopped by Jets goalie Keegan Paulette, but kicked way out into the slot onto the stick of Chase Burden, who fired a screened shot through the five hole to make it 3–1.

The Pirates attack continued, but Paulette stood tall. With less than five minutes to go in the frame Kurtis Wood was called for crosschecking, sending Amherstview to the power play. Adam Alcorn sent a fluky shot flipping over Picton goalie Aaron Young. The puck clanged off the post and out the other side of the net to a waiting Ty Norman who made it 3–2.

The Pirates entered the third with a one-goal edge, out-shooting the Jets 18–7 in the middle frame.

The one-goal lead held until the 13:25 mark of the third when Cody Smith evened the score for Amherstview. The teams traded chances in the three-on-three overtime, but neither were able to find the back of the net.

“We thought the guys brought the intensity level they needed and I thought the game was pretty exciting for the fans with the three-on-three overtime and there were a lot of chances at both ends in that,” said Masterson.

He said he was happy with the team’s play and it was ultimately a couple of bad bounces that kept the Jets in the contest.

“Their goalie played extremely well and they got two goals that bounced off of us and went to guys wide open at the side of the net in unlucky bounces, so we thought we deserved a better fate,” he said. “We told the guys to hold their heads high after that game because we played well.”

Masterson said the team didn’t have as much jump in Sunday’s contest, but were able to play smart and make the right plays at the right time.

The goals came early and late in the opening frame. The Pirates again opened the scoring with Cannons tallying off a play from Nick Kyte and Gerald Bilker. Bailey Matthews made it 2–0, scoring with 59 seconds left in the frame. Hunter Van Vlack and Will Harrison had the assists.

The Pirates held a two-goal lead entering the second period while the Jets held a 13–8 shot advantage in the frame.

The teams put a lot of shots on goal in the second, but Morrison’s goal to make it 3–0 at the 8:20 mark would be the lone goal of the period. Cannons and Noah Brant had assists.

The Jets again held the shot advantage, firing 17 shots on goal to Picton’s 10.

Amherstview was finally able to find an answer to Pirates goaltender Wes Werner 47 seconds into the third with Smith scorning. However, the Jets weren’t able to muster a comeback.

Matthews, from Van Vlack and Harrison, scored at the midway point of the period to make it 4–1 and Brayden Bertrand’s goal from Wood and Burden at 18:46 wrapped the contest.

Masterson said little things like using the glass to clear the puck and icing it when necessary made a big difference on Sunday.

“We knew we didn’t have a high energy level right after warm up, but the guys played smart and capitalized on our chances,” he said.

He also complimented Picton’s goaltenders for their work.

“Both goalies played well this week, [Young] played well on Thursday night and [Werner] made quite a few big saves Sunday to keep us in the game,” he said.

Additionally, Masterson praised the work of Cannons, who tallied his 150th PJHL point in Amherstview on Sunday.

The Pirates have just one game on the schedule this week, taking on the winless Campbellford Rebels tonight at 7:30 at the Prince Edward Community Centre.