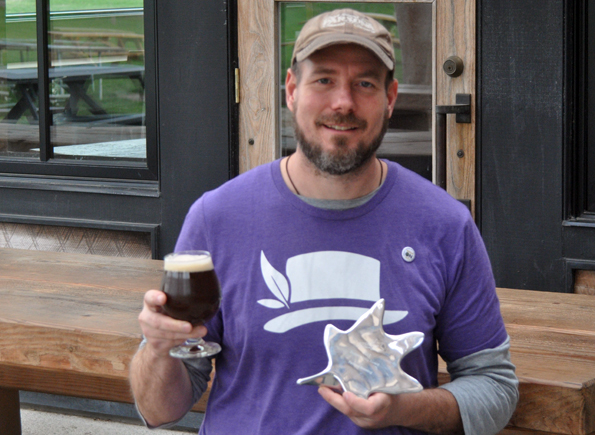 Sustainability is a hallmark of Picton’s Parsons Brewing Company, it even dictated the way the brewery itself was built. That attention to detail has not gone unnoticed.

While owner and brewmaster Chris Parsons appreciated the recognition, he firmly believes the line of thought upon which he and his wife Samantha built their business provides benefit simply by the way it guides operations.

“Sustainable business practices should be more than something we aspire to, they should be an integral part of every business. Resources are limited and it is up to all of us to make the most of them.”

In preparing the County Rd. 49 property to welcome the public, Parsons said a decision was made to repurpose two heritage post-and-beam structures as they were derelict and falling apart.
While some people might have chosen to just start over with new materials, efforts were made to reuse and recycle parts of the structures that weren’t able to be restored.

“We estimate that over 70 per cent of the lumber used was recycled, with clear benefits including no need for logging, transportation, or wrapping lumber,” he said. “(It also eliminated) emissions from transportation and labour hours spent in the processes.”

The cold room is also an example of ingenuity as it is a used refrigerated shipping container.

The efforts don’t just stop with the physical building, however. They can be seen in the beer. Two of Parsons’ brews feature mainly local ingredients. The Farmer’s Tan Harvest Ale features 95 per cent county-grown goodness with 100 per cent of its hops coming from local farms through Pleasant Valley Hops in Hillier and 95 per cent local barley, grown by Big Island’s Craig McClure and malted by Barn Owl Malt in Belleville. The Marysburgh Vortex is 85-per-cent local with 80 per cent of its hops coming through Hillier, 90 per cent local barley from McClure, and Ontario yeast from Guelph.

The commitment runs up and down the menu.

“For all of our about 20 different brews we’ve done, 55 per cent of our brewing ingredients are from Ontario,” Parsons said.
In the years to come, that supply chain will come even closer to home. Some three acres of barley have been planted on site and harvested to use in beers. Passersby may have also recently noticed a series of cabling on the yard. That will be a half-acre hop yard planted next spring which could, in time, serve 40 per cent of Parsons’ needs.
The award provides further evidence the efforts have been appreciated.

“I believe that customers recognize a thoughtful approach to business,” Parsons said. “Our staff are well versed in sustainability as a key part of our business model and we make it a core part of the experience.

“The QBAA Sustainability Award is meaningful in that it has given recognition for the efforts we have made. It also provides us positive feedback toward our goal of achieving LEED certification for our building.”

No doubt, Parsons will continue to think creatively as it moves
forward to build a commercial brewery building on the north side of its existing tap room. Designs are in process and construction is expected in fall 2018. Parsons said that will allow further efficiencies in the brewing process and a chance to expand.

The brewery will also mark its first year in business by approaching Brew No. 100, which will be the first to use barley grown on site.
Parsons Brewing Company was also nominated for the new business award, which ultimately went to Barn Owl Malt. Parsons said the Belleville business deserves it as “they are pioneers in what is the most difficult spoke in the wheel of creating a truly “local” craft beer.

In his own right, Parsons is appreciative for the nomination as it helps offer necessary profile to create collaborative partnerships and a stable 12-month business and it will help draw tourists in the busy season to allow for new investment and growth. He’s also pleased with the recognition of local craft beer.

“The number of craft breweries opened in the county over the past two years speaks for itself. I believe there are currently seven, when only a few years ago Barley Days stood on its own,” he said. “Every one of them has been running at full capacity all year, so that speaks to the reception of craft breweries as a whole. I am unsure as to what the magic number of breweries the county can support is, but we will soon find out as there are applications for another 13 new craft breweries, plus or minus.”

The Prince Edward County Chamber of Commerce is a partner in the QBAAs alongside similar organizations in Brighton, Belleville, and Quinte West. Parson said the Chamber’s executive director Emily Cowan has done a fantastic job championing local business and deserves gratitude for her efforts.