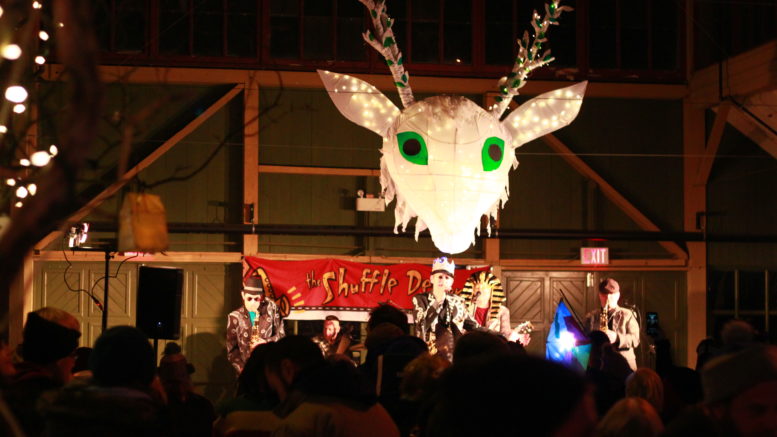 The Crystal Palace will be full of light once again this year. The Firelight Lantern Festival returns Nov. 18.

There’ll be songs, ice, and fire.

The Firelight Lantern Festival returns Saturday, Nov. 18 at 6:30 p.m. and, for the next few weeks, organizers will be inviting the public to a series of community lantern-making workshops.

Over the last four years a team of local artists have taught more than 1,000 people how to make their own handmade lanterns to carry in the annual parade from Benson Park through the streets of Picton to the Crystal Palace. All are welcome to the public lantern-making workshops and no experience or special talents are necessary to participate.

Local artist Krista Dalby is one of the event’s organizers. She said the event is meant to engage the community in a big, inclusive way. As the days grow shorter and winter closes in, the event gives residents a chance to create some light between one another, Dalby said.

“The lanterns are obviously physical objects, but it’s kind of a metaphor for the light we need to sustain ourselves throughout the winter,” she said.

A public workshop was held at Picton Town Hall was held on Oct. 22. A total of 14 more public and private workshops are planned for the next three weeks. For the first time, the artists have been invited into some local schools to hold some private workshops for students.

Every year, organizers stress the importance of making the event as accessible and open to all skill levels and all ages, as possible. Dalby said the organizers also want to ensure cost is never a barrier to get involved.

“There’s so much happening in the county and I do think the price point on a lot of events really does exclude a lot of people,” she said. “We always have a pay-what-you-can policy, both for our workshops and admission to the event itself.”

While people often question whether the event is targeted to youth, Dalby said that isn’t the case.

“We try to have different aspects of it appeal to different ages,” she said.

Efforts to grow the event appear to be working. Dalby said the Firelight Lantern Festival has come a long way since its humble beginning.

“It’s grown really big from our first year that was a very grassroots sort of experiment,” she said. “It’s become quite a big deal, it’s pretty exciting.”

With that growth, Dalby said the organizers also look to keep the event fresh. There are continual efforts to reinvent the festival in some way and ensure returning participants always have some surprises.

Each year the festival features a theme to help inspire lantern designs. This year’s theme is “Fire and Ice.” Dalby said the artists get together annually to brainstorm concepts that lend themselves to compelling imagery and Fire and Ice does just that.

“We thought that was a good jumping off point for people to have an idea of what they’re going to make” she said.

Spark Box Studio and Toronto artist collective Crazy Dames have been tapped to create a thematic display within the Crystal Palace.

“They’re doing a huge installation inside the Crystal Palace which will play on the winter theme and we’re creating some other fire-themed decor,” said Dalby.

Joining in the fun will be musical guests Maracatu Mar Aberto of Toronto. Described as a lively, Afro-Brazilian percussion and song troupe, Dalby said the band will bring some sizzle to the event.

“We’re thinking of them as a part of the fire element in Fire and Ice,” she said. “The music comes from a warmer climate, so it’s going to bring a bit of heat.”

Having worked with the band several times in the past, Dalby said the large band will be a great complement to the parade.

“Having music in the parade really gives it a lot of life and give people a bit of a beat in their step,” she said. “In the Crystal Palace they’re really going to rock it, it’s going to be fun to dance to.”

The Firelight Lantern Festival is organized each year by an artist collective called The Department of Illumination. The event will also feature light installations, a shadow puppetry play, and music from DJ Ombudsman. Admission is $5 for adults and $3 for children or pay-what-you-can. Advance wristbands are on sale at the Prince Edward County Chamber of Commerce office at 116 Main Street, Kelly’s Shop at 197 Main Street in Picton, and at all lantern-making workshops.