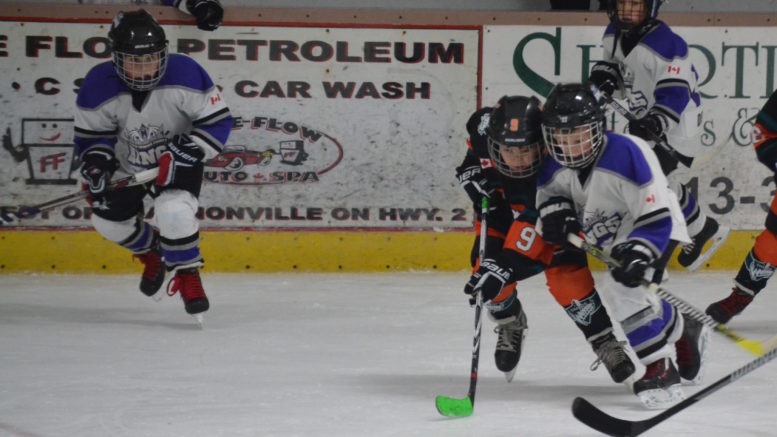 After several years of being welcoming hosts, the Prince Edward County Kings finally reigned over their own party.

For the first time in the tourney’s history, a total of three Kings teams took their respective crowns at the eighth annual Recharge with Milk hockey tournament sponsored by the Dairy Producers of Prince Edward County.

The annual mid-fall hockey showdown draws teams from all over Ontario as well as western Quebec.

Prince Edward County Minor Hockey Association (PECMHA) president Darren Marshall confirmed that after several finals appearances over the past few years, the Kings were finally the belles of the ball once again.

And, for the first time in eight years, in three different age groupings at the same tournament.

“It was an excellent weekend and the Kings winning three titles was just the icing on the cake for the PECMHA,” Marshall said. “For the association, this weekend is about having a successfully run tournament and you always want to make sure your guests happy with the product you put together. I think we accomplished that.”

All told, 42 teams from as far east as Alymer, Que. and as far west as Niagara-on-the-Lake played nearly 100 combined games in five age categories with over 3,200 cartons of chocolate milk handed out to thirsty players after each and every game.

The Milk Tournament is a popular hockey showdown for BB classified organizations in minor hockey circles and generates much needed revenue for the local association to help offset registration costs of both rep and local league players.

“The money made by PECMHA for the overall tournament goes for all rep and local leagues players to keep registration as low as possible for everyone,” Marshall added. “Without the strong support of this tournament, our registration costs would be much higher.”

In the Atom ranks, Kings were able to skate past the Simcoe Warriors 4-1 in a semifinal Sunday morning thanks to goals from Mitchell Sills (two), Jackson Payne and Griffin Lavender to earn a date with the Gananoque Islanders in the Greer Propane division finals.

The Kings were coming off a strong performance after winning the Bobby Orr Hall of Fame Classic in Parry Sound earlier this month and have yet to taste defeat this season.

Bench boss Tod Lavender said his club was able to win despite not reaching the upper echelons the 18-0-1 team has played at previously this season.

“I don’t think we’ve played as well as we have in other games or in that Parry Sound tournament but the players worked hard and persevered and I think that’s an important aspect of the game to learn at this stage of the season.”

In the finals, the Islanders were somewhat of a known quantity after the Kings shaded Gananoque in a sloppy 7-6 affair in the preliminaries. 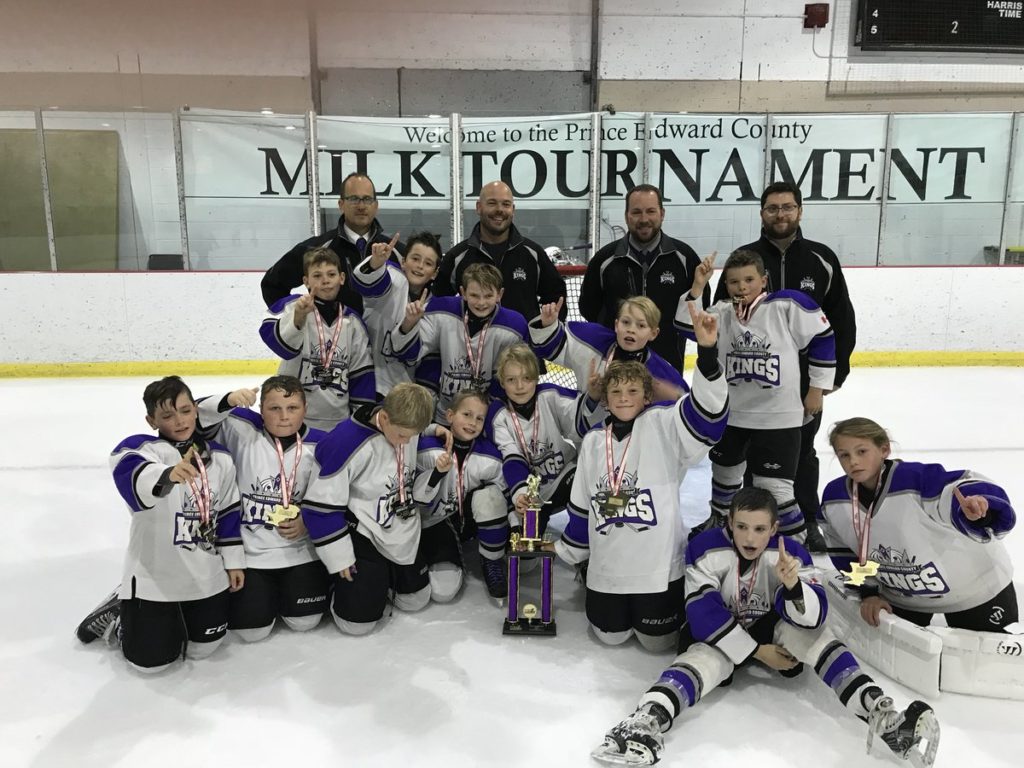 “They have a couple of big, strong wingers that can skate and shoot but our defensive corps kept the guys wide and when Lainey Van Vlack sees the shots from there, she’s going to make that save most of the time,” Lavender added.

The Kings jumped out to a 2-0 lead but the Isles came crawling back and the game was deadlocked 3-3 to start the third.

In the final stanza, Sills came through with a pair while Hayden Bender added a single to lift the Kings to a 6-3 victory going away.

“There were a lot of players elevated their play this weekend when we needed players to step up and they don’t always land on the score sheet but players like Connor Borton, Alex Lavender, Canaan Storms and Kallen Van Cott played significant roles and brought energy to our lineup,” Lavender added.

The Peewee Kings needed some shootout magic on Sunday morning in order to get past the West Lincoln Wrath 4-3 in a semifinal as the Wrath managed a goal late to square the affair at 3-3.

In the penalty shot showdown Reese Kleinsteuber and Gerrit Kempers both scored and Kings netminder Austin Stock stopped all three shots he faced to punch the Kings ticket to the finals.

Stock was at an all-time high according to Kings skipper Chris Rice.

“He came up big with some key saves and 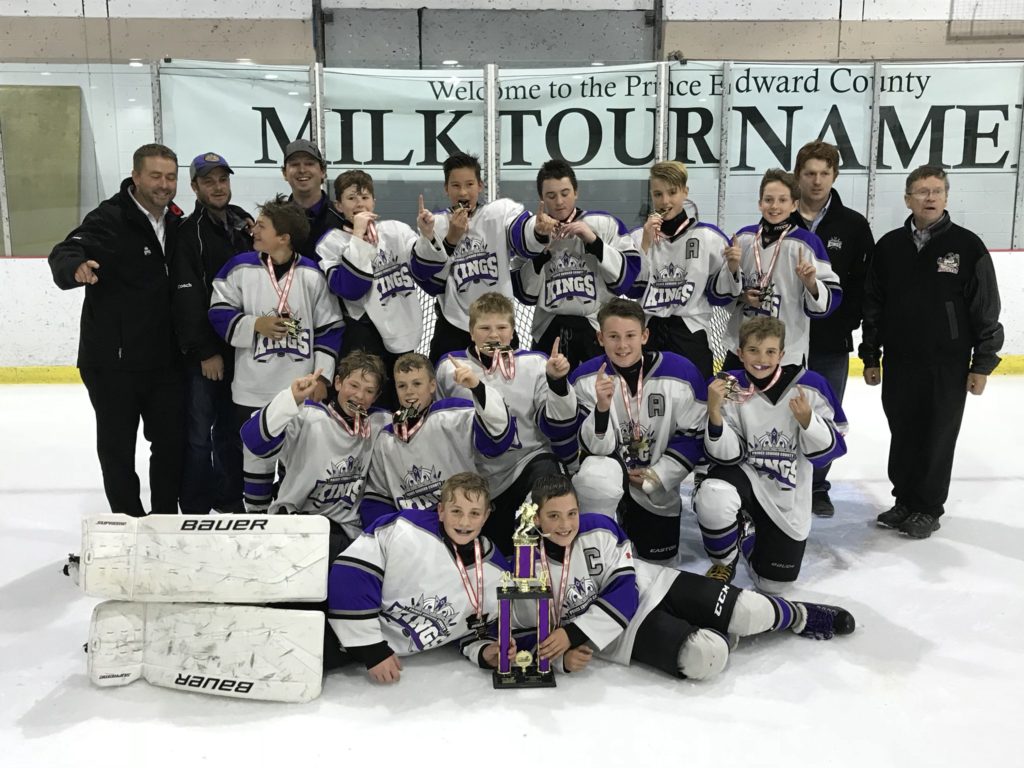 provided us the type of goaltending you need to win a hockey tournament like this,” Rice told the Gazette. “(Stock) only surrendered five goals in five games and he was on for us this weekend.”

In the Peewee final, a goal off the stick Kleinsteuber of was all Stock needed as he and his teammates blanked the Lindsay Muskies 2-0 to win the Custom Automotive Division crown.

It was mission accomplished for this particular group of peewee players that have knocked on the door of tournament wins in seasons past but have sometimes not been able to deliver.

“It goes to show this group has the grit to compete with the top-level teams at this age bracket in this category,” Rice added. “They came together as a team and played really sound hockey.”

Due to fatigue, the Bantam Kings might not have offered their best showing of the weekend in Sunday afternoon’s final but still managed to shade the Ayr Flames 2-1 in a shootout.

“Both teams were tired and wore down after a long weekend of hockey and we didn’t handle the puck as well as we would have liked. The team actually played its strongest hockey of the season on Saturday,” Kings coach Mike Pero said. “You are always looking to see if you can carry that momentum into the finals in a 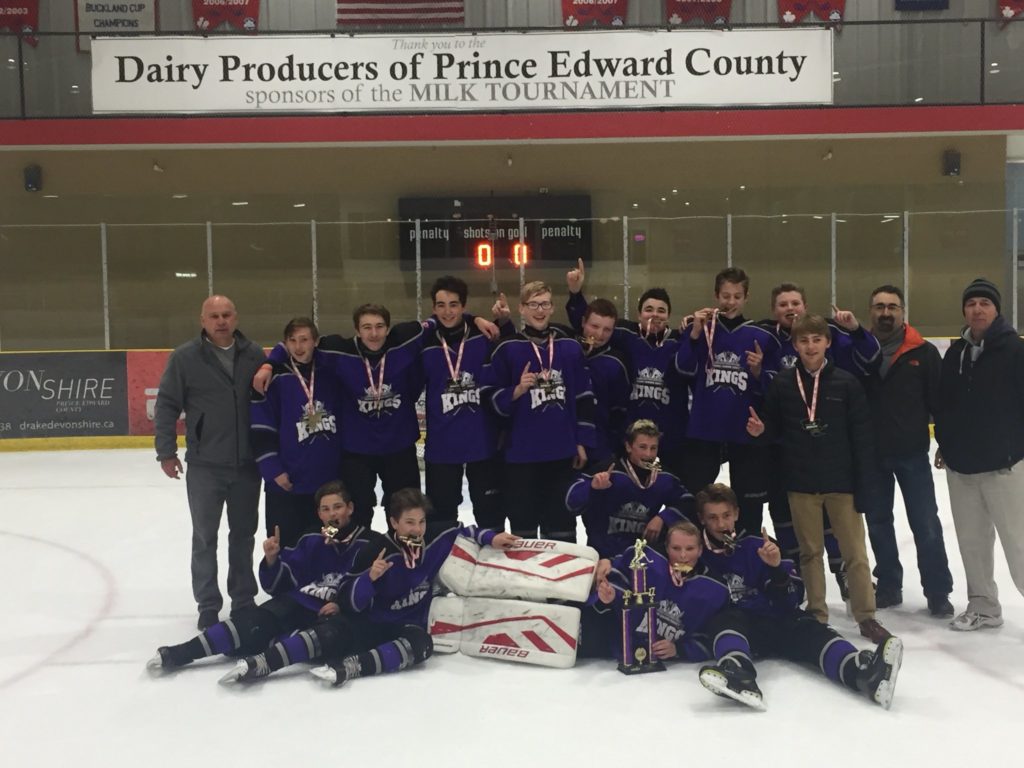 tournament like this and I thought we were a little untidy with the puck at times on Sunday.”

In a rematch from Saturday’s preliminaries which the Kings won 4-1, the Flames hung tough to force a shootout after the final ended in a 1-1 tie through regulation.

In the extra session, Kings netminder Nolan Lane was spot on, stopping all three Ayr attempts.

“(Lane) has been busy at times and sometimes not so much but he’s developing well and his compete level just keeps getting better He’s a solid goaltender and made some nice saves for us this weekend,” Pero added.

With the title on his stick, Consecon native Parker Mattis made a nice move on the Ayr netminder, faking forehand before roofing a back hand attempt at the side of the net.

“It was a beautiful move. We work on shootouts in practice and it’s good for the goaltenders and the players and you get to see some things. It’s not always easy to pick the player who takes the shot but Parker has a go-to move. It’s hindsight now, but I had a good feeling about his chances,” Pero said with a chuckle.

The long-time and highly successful Kings bench boss was speaking about his team’s experiences this weekend although it could be a blanket statement for all the Kings players who were able to take part in that special mob scene on the ice that comes with a hockey tournament triumph.

“The players are having fun and they always have the most fun when they’ve put in the most effort in to it and that’s what’s neat about sport. At this stage, it’s about making memories,” Pero added.

At the novice level, the Pembroke Lumber Kings got past their counterparts from Gananoque 6-3.

In the midget division sponsored by Printcraft, the Brighton Braves downed the Renfrew Timberwolves 2-1 to become the first back-to-back winners of the eldest age group in tournament history.

The game was an emotional one for the Renfrew club as the team almost pulled out of the tournament after a tragic car accident involving four members of the Renfrew Timberwolves of the Central Canada Hockey League Tier 2.

Prior to puck drop, the teams gathered at centre ice to honour those lost in the crash as well as those still fighting for their lives in hospital.

“A lot of the players and parents were shaken up by the tragic events but the team played really well this weekend and were a beacon for their community,” Marshall added.