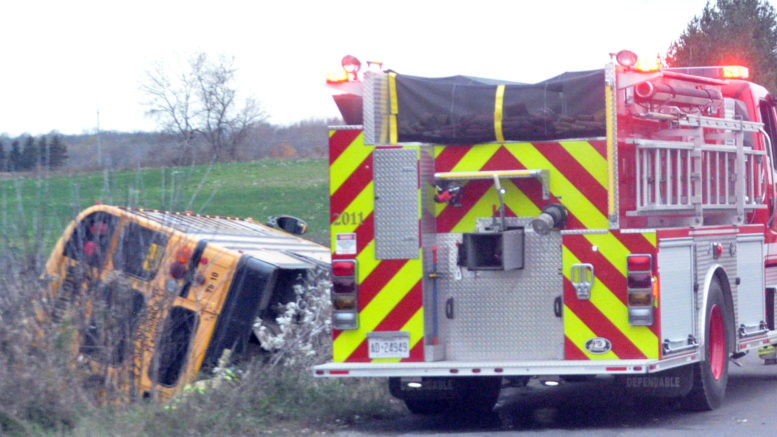 A school bus came to rest overturned with its driver’s side down in a field on Shannon Road Monday afternoon.

The bus was located on the south side of Shannon Road, just west of County Rd. 32, indicating it would have crossed onto the far side of the road it was travelling. The westbound driver had just dropped off a student before losing control.

OPP spokesperson Const. Kim Guthrie told the Gazette there were 12 students on the bus, of both elementary- and secondary-school age.

Paramedics checked each of the students and the driver. None were seriously injured.

A subsequent investigation concluded and OPP announced Tuesday the driver has been charged under the Highway Traffic Act.
Edward Taylor, 78, of Bloomfield was issued provincial offence notices for careless driving, failure to carry a completed daily inspection report and fail to carry an inspection schedule.

Guthrie did not say whether police believed strong winds in the area Monday were a factor in the accident.
Hastings and Prince Edward District School Board communications officer Kerry Donnell said when bus incidents occur, the bus company will provide Tri-Board Student Transportation Services with the names of the students on board. Tri-Board then notifies the school so that it can make contact with parents to share further information.

The board also endeavours to make child and youth counsellors available for students the following day if they’re in need of additional support.“

Their interactions are on helping students use and develop coping skills, such as doing breathing exercises and taking through one’s feelings,” Donnell said. “ They also help students to understand that life situations happen and how to deal with them.”

Donnell added that the way adults in the school react are also important to help students deal with unexpected events like bus accidents.

“Children have a tendency to react based on what adults do or say,” she said. “Our school administrators and school staff remain calm and are positive role models in situations like this,” she said.