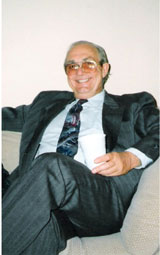 SMELLIE, John David
John died peacfully, in his sleep in his son’s home in Burks Falls, Ontario at the age of 78 after a short but brave battle with cancer. Companion of Nancy Ibbitson. Predeceased by his sister Anne of Niagara Falls, Ontario and survived by siblings, younger brother Bill of Picton, Ontario and his sister Jean of New Westminster B.C. John will be missed by all as an extraordinary person. He gave his all to D Smellie & Son, as the family’s traveling salesman, to each and every jewellery store in Ontario, from 1962 to 1992. Just ask any store owner. John was a long-time volunteer of the Scott Mission in Toronto. He loved his retirement time spent at the cottage at Lake Kasshabog where he was a prodigious maple syrup maker. John leaves a legacy of memories entrusted to his three children Dave, Mark and Renee. May God welcome him to a better place with open arms. Funeral Arrangements through Opatovsky Funeral Home, Burks Falls, Ontario