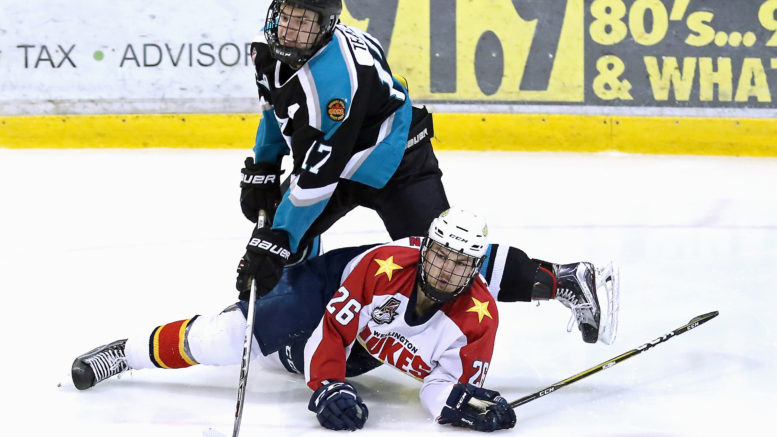 Brock Traill of the Lindsay Muskies tangles with Keegan Ferguson of the Wellington Dukes during Wellington's 6-3 win Friday night in Lindsay.(Photo by Ed McPherson / OJHL Images)

After dropping a 5-3 decision to the Trenton Golden Hawks Oct. 22 and tasting defeat for the first time in almost a month, the road beckoned the Wellington Dukes this past weekend with an opportunity for the local Junior A outfit to get back to their winning ways.

A three-games-in-three-days road trip that involved stops in Lindsay, Georgetown and Pickering was certainly a crush test to see how the young club would respond to a recent setback on home ice.

If you were to apply a grade to the test taken by the Dukes this weekend, a mark of B-plus would likely be an accurate assessment of the body of work turned in by Wellington as they took four out a possible six points during the hectic three day stretch.

Wellington (14-3-5, 33 points) was able to sandwich wins over the Muskies and the Panthers around a loss to the top-ranked Raiders and maintain their sizable lead over second place Trenton (19 points) and Kingston (17 points) in the OJHL East Division.

On Friday, the Dukes were stymied somewhat by the Muskies who were flying high after downing the Golden Hawks 2-1 in Trenton Tuesday.

“(Lindsay) did a good job of staying with us and frustrating us and we felt we were flat coming out of the gate,” Wellington Dukes general manager and associate coach Ryan Woodward said.

The Dukes surrendered an early goal to fall behind 1-0 but managed to crawl back to even the score midway through the opening stanza.

Daniel Panetta setup Teddy McGeen for the Windsor native’s 10th of the year at 9:46 and Wellington’s offence continued to flow later in the frame as Andrew Rinaldi’s power-play goal staked the Dukes to a 2-1 lead they took to the dressing room and the end of the first.

Wellington would outshoot the Muskies 22-8 in the period but Woodward said most of Wellington’s volleys came from the edges of the offensive zone.

“On the opportunities we did have in close I thought their goaltender (Tyler Richardson) was really good,” he added.

The clubs traded goals in the second with Geoff Lawson scoring his first as a Duke at 8:46 to build a 3-1 lead in favour of Wellington.

That margin lasted about five minutes however as Lindsay’s Ethan Ramsden scored a shorthanded goal to make it a 3-2 Wellington lead.

In the third, Wellington took over with Mitch Martan and Rinaldi each lighting the lamp to put their club well in front at 5-2.

The Muskies made one last flop forward with Clay Coles goal at 14:30 but Rinaldi would salt the game away with his hat trick goal into a vacated Lindsay cage with just 32 second left to make it a 6-3 final.

On Saturday, Wellington took on the West Division-leading and back-to-back Southwestern Conference Champion Georgetown Raiders at the Mold-Masters Sportsplex in Halton Hills.
As daunting a task as Wellington has faced in some time, a duel with the Raiders in an hostile rink was a good gauge of where the Dukes stand with the very best of the OJHL.

Wellington was equal to the task through 40 minutes as Mason Snell and Ben Evans power-play goals kept the Dukes even with the hosts 2-2.

However, in the third period, Wellington got a full view of how quickly the transition game of the Raiders can maximize on even the smallest of miscues.

“Georgetown is a fast team that’s well coached and well structured. They play the game fast and it was an eye opener for some of our guys,” Woodward said. “It’s a small rink and you can’t turn pucks over in that neutral zone or it will haunt you.”

The Raiders scored at the 4:27 mark of the third to gain a 3-2 lead and bagged a back-breaking insurance goal on the power play at 12:09.

Wellington was unable to mount much of a last stand as they incurred a pair of late minor penalties and an empty net goal with just under 20 second left sealed what was already looking like a sure Georgetown win.

Despite taking the loss, Woodward said Wellington netminder Jonah Capriotti was outstanding in net for the locals.

Wellington would bounce back the following night in Pickering, besting the Panthers 4-3 in overtime.

Woodward said ending the weekend on a high note was important to the hockey club.

“It was a really tough weekend but getting those two points on Sunday night was important,” Woodward said. “We weren’t happy with giving up a lead late but being able to recover and finish in overtime was nice to see.”

Tied 1-1 after two, the Dukes and the Panthers went back-and-forth in the third up until the final minute.

Martan would push the visitors ahead with a power-play goal at 7:51 to make it 2-1 Wellington but Stefan Palatsidis drew Pickering back to even with a goal at 15:17.
Jackson Arcan’s unassisted goal at 17:49 looked like a potential winner for Wellington until

Pickering’s Mitchell Doyle struck with just 50 seconds left to force overtime.
In the extra session, it was Mitchell Mendonca finding Teddy McGeen at 1:53 to get Wellington the extra point and end the weekend in a celebratory mood.

After a tough road stretch, the Dukes are in line for some home cooking at Essroc Arena, hosting Whitby on Friday night and Lindsay Sunday afternoon.