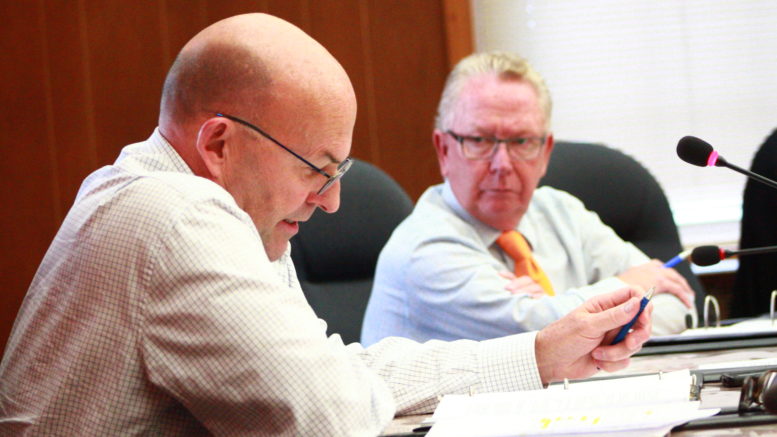 Committee of the whole supported a motion last week which would make official council’s support for the efforts of a local organization in questioning the process and legislation that has allowed developers to move forward with industrial wind turbine projects along the county’s south shore.

Last Thursday, committee unanimously supported a resolution which, if approved by council at their Nov. 14 meeting, would voice support for the County Coalition for Safe and Appropriate Green Energy (CCSAGE). The resolution was supported in front of a packed crowd in Shire Hall, the majority of whom came specifically to hear council’s decision on the matter.

The resolution reiterates the municipality has already declared itself an unwilling host to industrial wind turbine projects. It says the County has conveyed this stance to Ontario’s premier, cabinet, ministries, and agencies involved on numerous occasions. The resolution acknowledges council has been provided with notice of application for judicial review and notice of constitutional question filed by CCSAGE in Divisional Court in opposition to the wpd White Pines Project and the enabling legislation. The resolution says the matters are of direct concern to this council and council supports the efforts of CCSAGE  in challenging the legislation.

The resolution was brought to the table by South Marysburgh councillor Steve Ferguson, a staunch opponent to the now nine-turbine White Pines project. Ferguson said turbine construction-related activity in the ward has picked up steam and so too have complaints surrounding that work.

“The recent turbine activity in South Marysburgh has escalated and has seen reports to the OPP, the Ministry of Transportation, the Ministry of the Environment and Climate Change concerning construction activities at the site, and possible/probable violations of the road use agreement that we entered into with wpd,” said Ferguson.

However, he said resistance to the project should be directed at the legislation that allowed it to happen. He said the issue has created “expensive divisiveness” — especially in South Marysburgh.

Ferguson said CCSAGE’s application for judicial review likely won’t be heard until sometime next year. Local organizations have invested in excess of $1.5 million and a lot of time in fighting turbine projects planned for Prince Edward County. Like those organizations, Ferguson said, CCSAGE’s efforts are being funded entirely by members and supporters.

“Over the past several weeks [CCSAGE] have gone out to other communities in Ontario and asked for support of this resolution and thus far they have 20 communities and other community groups supporting the application,” Ferguson said.

“I’m asking council support CCSAGE’s initiative to take this to the next step and support their application,” he said.

Councillor Jim Dunlop was among those who spoke in support of the motion.

“We’ve come this far, there’s no reason we shouldn’t take the next step,” he said.