The County Foundation and those involved with the Vital Signs project have been hard at work in the community since the initiative launched in 2013 and the foundation is setting its sights on a new Vital Signs report in 2018.

Beiles said the Vital Signs report is a key strategic initiative for the foundation. The report provides a snapshot of Prince Edward County 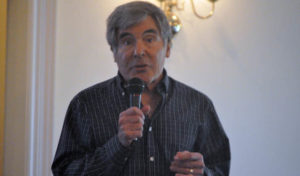 based on quantitative and qualitative research to raise awareness about the state of the community and address challenges.

“In 2018 we proposed to do another Vital Signs report based on the 2016 census data in addition to various other inputs from local sources,” Beiles said.

He said the foundation is currently focused on funding commitments, but will soon be hosting a series of community engagement sessions in addition to an online survey. Those will be announced in the near future.

“From that data, we will strike again an advisory committee to look at the priorities we’ve got to focus on for 2018 and then we’ll conduct research, write and review, and so forth,” Beiles said.

He said the entire process is expected to take about a year and the launch of the new report is anticipated for October 2018.

The first report was completed in 2013. The report helped the foundation prioritize challenges and led to the creation of three collaborative working groups tackling learning, food security, and transportation issues. That work has helped bring in over $200,000 in grants to support emerging projects being led by those working groups.

The food security collaborative brings together 20 partner organizations and community members. There are already a number of initiatives in place in this area of focus, including the Picton and Wellington community gardens, Food for Learning, and the Food to Share program.

“Notwithstanding all of this, the current level of food insecurity is still around 11 per cent, which is the equivalent of about 2,500 people in Prince Edward County,” Beiles said. “Essentially, there’s something else that needs to be done.”

The food security collaborative has received $30,000 from OTF, $10,000 from Loblaw Companies Limited, and $7,500 from a private donor to develop a collaborative, integrated plan to address food insecurity in Prince Edward County. Beiles said the plan will be a systems-wide look at the root causes of the issue and opportunities to address them.

“That is underway and we’re hopeful we’ll have something forthcoming in the first quarter of next year,” Beiles said.

Gilbert said the foundation currently manages a total of $1.8 million. Those funds are set up in three ways. Donor directed funds managed by the foundation support a range of community interests including heritage, the arts, and health. TCF added four new donor directed funds in 2017. Secondly, the foundation manages scholarships and bursaries available to all students who are county residents and are pursuing post-secondary education. Those scholarships are also broadly based, targeting academic achievement, arts, and trades. Four new scholarships were added in 2017.

Lastly, the foundation manages the municipal grants program for cash and in-kind grants under $5,000 and provides a 25 per cent top-up to the cash portion of those grants. TCF also manages in-kind grants only up to $1,000.

“New festivals were supported, sports and recreation added new programming, and ongoing programs of substance continue to receive support,” said Gilbert. “Projects from all six areas of interest receive money and operate in every corner of the county.”

Grants to the community since 2010 now exceed $500,000 and in the past year the foundation has funded projects to the tune of $100,000. Gilbert said planned giving is on the rise and TCF will be launching a new fund in 2018.

“While it’s a little premature to provide details, what I can share is The County Foundation has received a very, very generous gift for the community,” he said. “Over the next 15 years, this new fund will result in almost $900,000 in cash grants to the community creating projects of twice that size or $1.6 million.”

He said an announcement with more information will be coming soon.

Formerly known as the County Community Foundation, the TCF was founded eight years ago. The foundation is one of 191 community foundations across Canada. Since its founding, TCF has received a number of bequests and manages 20 endowment and other funds which back evidence-based charitable initiatives in Prince Edward County.