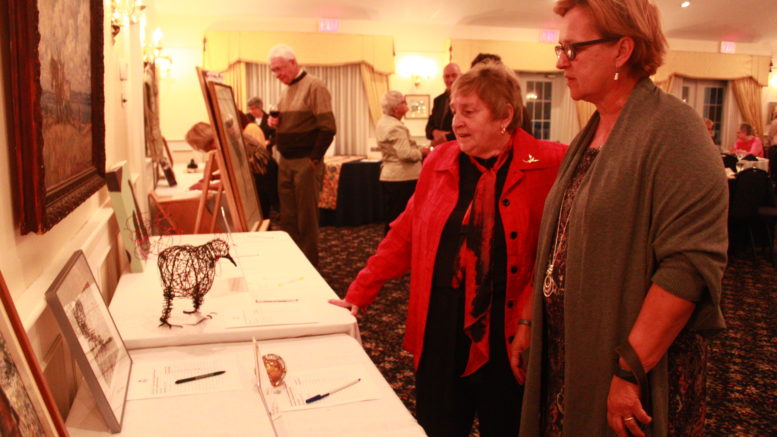 Sandy de Sousa and Margaret Christie inspect some of the auction items up for grabs at Saturday's PEPtBO fundraiser.

It was one of the best years ever for the Prince Edward Point Bird Observatory’s annual fundraising dinner and silent auction.
The 16th annual event took place Saturday evening at the Waring House, drawing more than 100 people and generating approximately $5,700 for the Prince Edward Point Bird Observatory (PEPtBO). The observatory receives no government funding for regular operations and must raise approximately $70,000 annually to cover costs.

Event organizer Mike Parry said the event was excellent and “one of our best ever.” He said organizers are never certain what to expect when hosting events, but pointed to the number of people who attended and the amount raised in deeming the event a success.

The buffet dinner featured a silent auction and the winners of the 2017 PEPtBO raffle were also drawn. The event was just one of many ways the bird observatory funds its research and outreach activities.

“We have to chip away all year with little fundraisers and ways of getting money,” said Parry.
PEPtBO past-president Cheryl Anderson reiterated that point, saying the PEPtBO is entirely self-funded.

“We don’t get any government grants unless we’re going to do a specific research project,” she said. “As far as running the day-to-day observatory activities, we have to raise all that money ourselves.”

She said that means hosting a lot of fundraising initiatives. This year’s raffle helped generate about $4,000 for the cause. Anderson said the observatory also sells memberships and takes donations. New this year was the PEPtBO Nature Matters booklet listing all the observatory’s activities taking place through summer and fall.

“It was tremendously successful,” she said of the booklet.

The observatory also sells shade-grown coffee as a part of efforts to fund operational expenses such as paying banders and covering the cost of water, propane, and food.

“We have to raise upwards of about $70,000 a year,” she said. “We need to work hard at raising money, so these activities are very important to us.”

Parry said the dinner and auction wouldn’t be possible without the individuals and businesses who donated items. Anderson said Prince Edward County’s well-known generosity was on display again this year.

“We didn’t have to ask anybody this year, everybody just started phoning us and dropping stuff off here and, wow, it’s just great,” she said. “People are so generous.”

She said that show of generosity was also evident in those who bid on items and who have donated throughout the year. The event receives significant support from local businesses, including the Waring House. Anderson said the business donated the venue in addition to contributing items to the silent auction.

The guest speaker was one the bird observatory has been keen to bring to Prince Edward County, Anderson said.

“We waited a whole year to get her, we wanted her to come last year, but she was already booked,” Anderson said. “It was really, really special for us to have her there.”

“The point is we need to preserve large areas of undeveloped land if we’re going to prevent mass extinction of birds,” Anderson said.

“That’s very important for us all to know here in the county.”

Parry thanked Rita di Ghent and Sam Sharkawy for once again providing the music for the event.

The volunteer-run bird observatory is a registered charity, a migration monitoring station, a member of the Canadian Migration Monitoring Network, and caretaker for the globally significant Prince Edward County South Shore Important Bird Area. The observatory seeks to provide the community with opportunities to engage in and support conservation of bird populations and habitats. PEPtBO collects data through spring and fall bird banding programs, takes a daily census of populations, and conducts observation surveys and research projects.