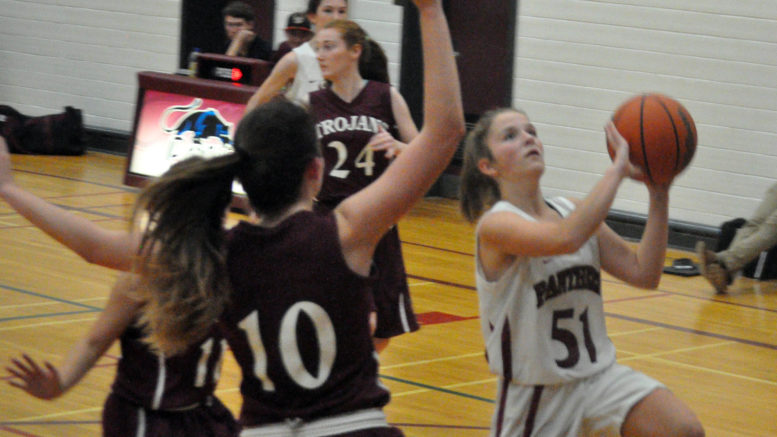 With a split in two games last week, the PECI Junior Basketball Panthers secured second place in the Bay of Quinte Conference standings and a home-court berth in the semifinals.

On Wednesday, the St. Theresa Titans surprised the Panthers with a defensive look they hadn’t encountered at any point this year. The strategy worked. The Titans baffled the Panthers and built a 20-point halftime lead before winning 41-34.

“The juniors got pressed. We played 18 games up until (Wednesday) and we had not yet seen any pressure,” coach Rob Garden said. “We got down big time in the first half, especially the first quarter.”

During the break, the home side seemed to regroup. They managed to put aside the nerves that plagued them early and just got back to playing simple basketball. The Panthers outscored their foes 25-18 during the second half, but the damage had already been done.

“We have to get over it and the only way to get over it is by playing,” said Garden. “If we get over those nerves I think we’ll be better in the next few games.”

Grade 9 guard led the Panthers with 12 points. Myla de Boef and Becca McHugh had six each.

Sure enough, Garden’s prescription for a rebound was just what the Panthers required. The fifth-place Moira Trojans came into the PECI gym the next night and PECI rebounded really well.

Outscoring the Trojans 23-5 in the first quarter alone, the Panthers breezed to a 63-28 decision.

“We did some good things. We still have a lot of learning to do, I think, but for the most part, when you score 63 points in a game, you have to be happy about it,” Garden said. “Our full-court pressure is getting better and that caused a lot of turnovers in the first. That gave us a nice little lead and we were able to work through the rest of the game fairly comfortably and confidently.”

Post player de Boef had the hot hand, scoring 19 points. According to Garden, she battled well against some athletic Moira athletes. She’s also showing improvements in her game.

“She’s really starting to understand how to move without the basketball and how to read where the ball is going to end up,” he said. “She hit some jumpers too and that’s expanding her game 12-15 feet, which is a good thing.”

Some 10 Panthers were on the score sheet. Goad had 10 points, McHugh and Gracie Burris added seven each. Garden said he’s pleased with the way Burris is stepping in as a first-year player and consistently putting up points as the post-season draws near.

With the second-place finish, the Panthers will likely host Nicholson in a semifinal, barring an upset. The Crusaders beat them once this year, so Garden knows it will be a tough game no matter the opponent. He said his team will have to use its bye week to work hard in preparation.

The Panthers have earned a COSSA berth already, but they’re hoping for a trip to the final, which would likely offer another glimpse at the Titans.