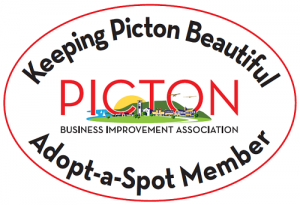 The Picton Business Improvement Association (BIA) is saluting downtown business owners for doing their part to keep the town looking beautiful this summer.

In the spring, the BIA launched a new Adopt-A-Spot program. Its first project was inviting downtown businesses to water flower baskets. The change came with the new light standards installed during the Main Street Makeover. Instead of plantings hanging 14 feet in the air, they were lower and more accessible to be watered.

“We approached the business owners and they were all so eager to participate. There were a few businesses who had challenges due to hours or staffing, but we had no problem someone next door who was willing to volunteer. They are a truly amazing group of people,” said BIA chair Robyn Molyneaux who said the BIA provided the flower baskets and watering cans and businesses did the rest. Some 31 businesses took part, becoming known as the “Flower Brigade.”

Streetscape chair Arlene Wright was pleased with the collaboration.

“The flowers were absolutely spectacular this year. A lot of credit has to go to Lockyer’s Country Gardens for delivering such beautiful baskets — but without the dedication of the businesses, they wouldn’t have flourished. I think there was even friendly competition on Main about whose baskets looked the best.”

Some businesses even went a step further by adding their own hanging baskets and planters.

Through an employment partnership with Community Living Prince Edward, the BIA was able to hire Alec Kanga to provide supplemental watering and fertilization for the flowers. The County supplied him water at Shire Hall

The BIA thanked Susan Hughes for her dedication to planting and watering the Shoppers parkette beside McDonald’s and board members Wright and Penny Morris for providing extra care for the baskets.

Wright actually tended the flowers in four large Main Street planters, two planters at Shire Hall and at garden areas at the Crystal Palace, the Prince Edward Old Boys Memorial Entrance to the Picton Fairgrounds, at Shire Hall and its adjacent parkette, the Picton library branch, The Victory, the Chamber of Commerce office, and County Rd. 49 Picton sign.

Because of the Adopt-A-Spot project, the not-for-profit BIA was able to save money in its discretionary budget. Office administrator Judith Burfoot said some of those savings have helped purchase more lit decor for the upcoming winter season.