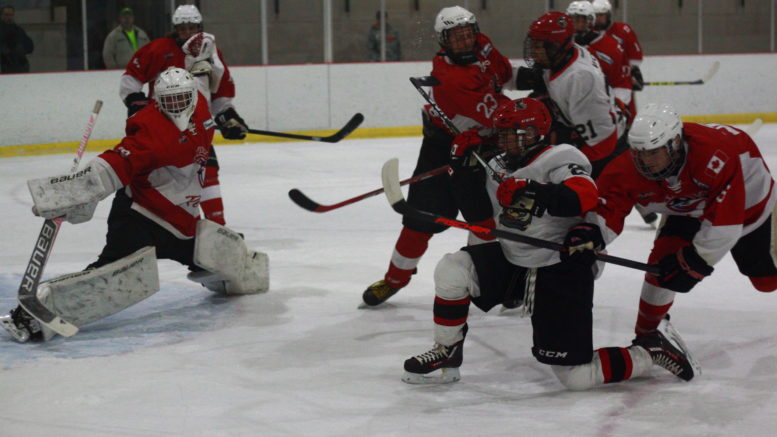 The Pirates are now unbeaten in their last seven games following a 12–0 rout of the Campbellford Rebels last Thursday.

The Pirates (8-3-1) are off to a hot start early in this PJHL season. Since a 6–4 loss to the Napanee Raiders on Oct. 5, the Pirates have six wins and one tie including a 5–2 win over last season’s Tod Division champion Port Hope Panthers on Oct. 14. Thursday’s drubbing of the winless Rebels briefly bumped Picton ahead of Port Hope in the standings, moving the Pirates into second place behind Napanee. As it stands the Pirates remain in third place, one point behind Port Hope.

Picton general manager Chris Masterson said the contest was important both in keeping the Pirates’ momentum moving forward and in showing the team wouldn’t take a night off against a weaker opponent.

“We preached a lot of times about not letting bad habits creep in in games like that,” he said. “It’s tough to do, guys get a sniff of blood and they want to take advantage of the offensive opportunities — you try to preach to them to still do things the right way.”

Early on in Thursday’s contest Campbellford was able to generate some good zone pressure, but they weren’t able to create much in the way of scoring chances. Masterson said the Pirates were flat to open the contest, but got better as the game wore on. As the opening frame neared the midway point, the Pirates seemed to find their legs somewhat and really put the pressure on the Rebels.

At the 6:56 mark Rebel Kurt Gibbs was sent to the box for interference. On the ensuing man advantage, Bailey Matthews fed a pass to Devin Morrison who stood alone at the edge of the Campbellford crease. Morrison lifted the puck high over goaltender Nathan Walford to put the Pirates in front. Nick Kyte also picked up an assist on the play.

The goal seemed to energize the Pirates and they upped the tempo. Just 1:29 later, Gerald Bilker collected the puck below the Rebels goal line and fed a pass into the slot to Jordon Cannons, who chipped it over a sprawling Walford to make it 2–0.

The Pirates peppered the Campbellford net, wrapping the period with a 20–4 advantage in shots on goal.

Things only got worse for the Rebels from there. Brayden Bertrand scored 3:37 into the second on a play from Matthews. Just over a minute later, Morrison tallied his second of the night to make it 4–0. Riley Manion and Cannons had the assists.

Chase Burden extended the Picton lead at the 6:33 mark of the second with Will Harrison and Matthews collecting assists. Nick Hoey made it 6–0 at 9:05 with Kurtis Wood and Kyte notching helpers. The Pirates continued to rack up points with Justin Arnold scoring at 10:19. Tyson Cassidy assisted on the play. Bilker then connected on a play from Morrison and Cassidy at the 13:00 mark. Hoey scored his second of the game at 16:39 from Wood and Bilker, and Bertrand added his second of the contest from Jaydon Wood and Hoey at 18:27.

The Pirates found the back of the net eight times in the frame, bringing the score to 10–0. After two periods the shot clock read 50–11 in favour of Picton.

Noah Brant, from Cannons and Matthew Scott, scored just 1:14 into the third and Bilker, from Arnold and Manion, rounded out the scoring at the 9:44 mark. The Pirates added another 15 shots in the frame to Campbellford’s four.

Both the power play and the penalty kill were perfect for the Pirates in the game.

Masterson said the team’s power play has been clicking all season. The team has preached quick puck movement and the importance outmanning opponents in battles for loose pucks. That was on display Thursday.

“We’ve been preaching that, hound the puck, and guys have been doing a really good job of that,” he said.

The Pirates face Port Hope tonight before facing Campbellford again on Saturday. Puck drop for both contests is 7:30 p.m.

Masterson said Thursday’s contest will give a good indication of where the team really stands.

“We’ve beaten [Port Hope] once, there might be some nagging doubts that that’s a fluke,” said Masterson. “We beat them again and all of sudden we have everyone believing in each other.”

He said it’s a big game in that sense — a chance to prove the Pirates belong in the top two or three teams in the Tod Division.

In other Pirates news, captain Jordon Cannons has been named the Tod Division player of the month for September/October. Cannons recently tallied his 150 career point. The fifth-year PJHL player is currently second in division scoring with 14 goals and nine assists in 12 games.

“We’re pretty proud of the fact that he was player of the month winner,” said Masterson.