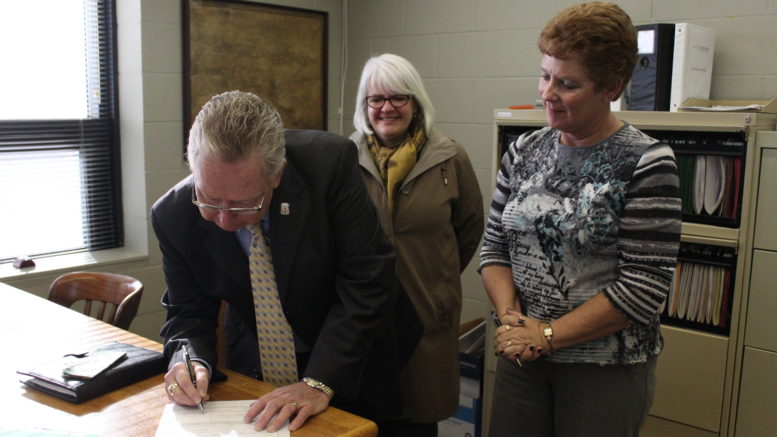 Susan Quaiff and County clerk Kim White look on as Mayor Robert Quaiff files paperwork to run for mayor back in 2014.

Mayor Robert Quaiff confirmed this week he will indeed be running as the Liberal candidate to represent the Bay of Quinte riding in the upcoming provincial election.

Rumours circulated this spring that Quaiff would seek the Liberal nomination. While he downplayed them at that time, Quaiff’s announcement Monday afternoon confirms he’ll seek a provincial seat next June.

Quaiff said in his announcement he’s honoured to be nominated as the Bay of Quinte Ontario Liberal candidate for the June 2018 election. Through his positions as mayor of Prince Edward County, chair of the Eastern Ontario Wardens’ Caucus and as a member of the board of directors for the Association of Municipalities of Ontario, he said he has worked closely with provincial officials and has come to respect the Liberals’ plans.

“Through all of that there were a lot of good things and a lot of good conversations took place,” said Quaiff. “It showed to me they have a lot of principles along the same lines that I do.”

Plans to increase minimum wage to $15, the Ontario Basic Income Pilot, and free tuition for postsecondary students have all contributed to Quaiff’s respect for the party, he said. He indicated rent control measures, plans to fight climate change, and improvements to the health sector have been important as well.

“Their commitment really to roads, bridges, transit, schools, hospitals — all of that — is making a lot more sense than sitting back and not having a plan to go forward with anything,” he said.

Quaiff will be running against the riding’s current MPP, Todd Smith. Smith unseated Liberal rival and veteran MPP Leona Dombrowsky in the race to represent Prince Edward-Hastings back in 2011. Asked whether he’ll be able to do the same to Smith, Quaiff said time will tell.

“I’ve really sat down and talked thoroughly with my family and others weighing my odds of success and I believe that the Bay of Quinte region will have a good quality of candidate to make a selection from,” he said.

During his term as the councillor representing North Marysburgh from 2010 to 2014, Quaiff was a frequent critic of the provincial Liberals. During one discussion regarding the province’s handling of green energy projects in 2013, Quaiff said he’d lost trust in the Liberal government and accused Premier Kathleen Wynne of lying to the Wainfleet working group that had been advocating for municipal rights within the Green Energy Act.

Quaiff acknowledged his past actions may draw criticism now that he’s decided to join the party. He said he’s discussed his positions with the Liberals, in particular his opposition to the Green Energy Act and industrial wind turbines.

“I know from my experiences that a lot of people that are opposed to industrial wind turbines are not necessarily opposed to the Green Energy Act and some components, and it’s more targeted toward industrial wind turbines,” Quaiff said. “The Liberals know my position on that, they know I’ve produced a lot of evidence and documentation, but they’ve also said I’ve done it in a professional and respectful manner.”

He said the provincial government suspended it’s Large Renewable Procurement (LRP II) program last year. He said he believes positive changes to the process are on the way.

“I believe there will be changes made, significant changes to the Green Energy Act before LRP III starts up and I hope to be a part of that, “ he said.

He also acknowledged that he briefly served on the local Progressive Conservative riding association. Quaiff said his political leanings have changed since that time. As councillor and as mayor, he said he’s had opportunities to speak with representatives from all three major parties.

“One thing I’ve discovered is one party had policies and had answers and other parties sit back and do nothing but criticize and produce no evidence of having a plan or a policy,” he said. “That’s why it was easy for me to be able to make the decision to join up with a party that actually works on behalf of the people to find a result.”

In the meantime, Quaiff will continue in his role as mayor of Prince Edward County. He said when the election is called he’ll take a leave of absence from the position. Council will designate an acting mayor in the interim. If he’s ultimately successful, Quaiff said he will resign as mayor. If not, he’ll complete the term.