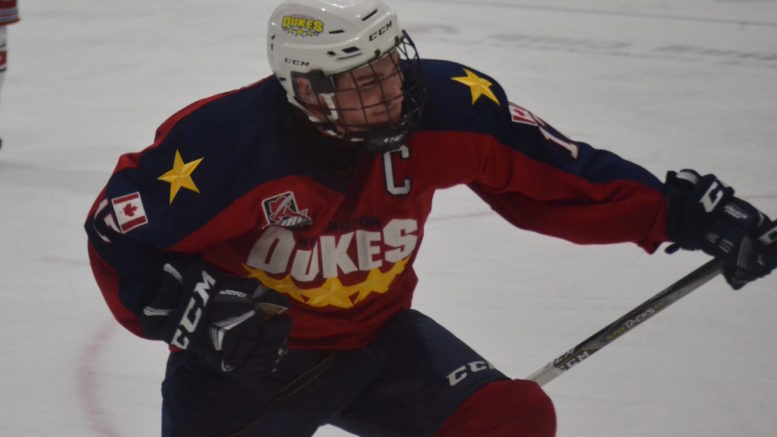 The Wellington Dukes will be well represented at the Eastern Canada Cup all-star challenge hosted in Quinte West later this month.

Six skaters and the club’s coach will help fill out three rosters representing the Ontario Junior Hockey League as the best from five Junior A leagues from here to the Maritimes invade the Duncan McDonald Memorial Gardens Nov. 13-15.

Forwards Mitch Martan, Andrew Rinaldi and Colin Doyle were named to the OJHL Hawerchuk roster while Ben Evans will suit up for OJHL Coffey.

Defencemen Declan Carlile and Mason Snell will play for the OJHL Oates squad.

In addition to a large Dukes contingent, Bloomfield native Jett Alexander will tend goal for the OJHL Coffey team that will be coached by Wellington bench boss Scott McCrory.

The seventh annual all-star showcase event is being hosted for the third time by the OJHL and is one of the premier Junior A hockey events in the country, providing tremendous exposure for top prospects.

The tournament was created as a competitive alternative to the annual league all-star games and debuted in 2011, hosted by the CCHL’s Smiths Falls Bears. The uniquely formatted tournament is played with two 20 minute halves (instead of three periods), focusing on high-paced and intense action.