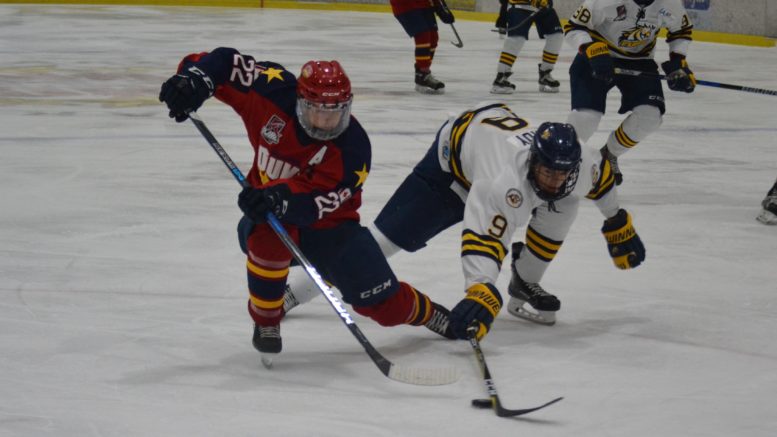 Wellingto forward Mitch Martan tries to evade the checking of Whitby defender Joe Roy during the second period of a 0-0 tie at the Essroc Arena Friday evening. (Jason Parks/Picton Gazette)

It went from the ridiculous to the sublime for the Wellington Dukes this weekend as they took three out a four possible points in one of strangest ways imaginable.

The locals played into a scoreless tie against the visiting Whitby Fury on Friday night before shifting the offence into high gear on Sunday and mounting the Lindsay Muskies to the tune of 9-0.

Wellington (15-3-6) was able to build on its lead in the Ontario Junior Hockey League’s East Division with a regulation tie and a win, however, facing two teams with a combined six wins in 37 games, one could hardly fault the first-place Dukes in expecting to bag the full compliment of points available.

It was another slow start for Wellington on Friday and if there’s been one Achilles heel for the young squad through 24 games, it’s been the ability to answer the opening bell.

“We got off to a slow start on Friday and missed an opportunity to jump on them early and it cost us,” Wellington Dukes General Manager and Associate Coach Ryan Woodward told the Gazette Monday.

Whitby would outshoot Wellington 10-7 in the opening stanza and but it was the Dukes who responded with more offensive zone presence in the second period, out shooting the visitors 17-5.

Colin Doyle had a glorious chance to open the scoring, taking a Mitch Martan feed in the hash mark area but roofed the puck out of play just before colliding with Whitby netminder Nate McDonald who was spectacular all game long.

“(McDonald) is a high-end goaltender in this league and we were guilty of letting him feel the puck early and seeing it,” Woodward added. 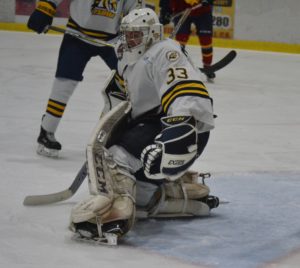 In the Wellington net, Jonah Capriotti wasn’t assigned as heavy a work load but was more than equal to the task of foiling the Whitby shooters.

The game went scoreless through the final frame and the first overtime in which Wellington found iron behind McDonald during a powerplay but the Dukes couldn’t tickle the twine.

In the second five-minute overtime that was played three skaters aside, Wellington would outshoot Whitby 7-2 but again came up dry and the first 0-0 tie the Dukes have been involved in in over a decade was in the books.

While the online stats only go back as far as 2005-06, it’s quite likely this was Wellington’s first scoreless draw since before some of the players on its roster were born.

One watcher said Friday’s outcome was as rare a hockey happening as seeing Big Foot riding a unicorn over the hills of Hillier.

Capriotti made 32 stops while McDonald was tested 45 times.

On Sunday, if Wellington had any worries about being blanked a second time by a team languishing in the bottom of a division, they didn’t show it.

Andrew Rinaldi and Teddy McGeen scored inside the first ten minutes and there was no stopping Wellington as the goals kept coming en route to a 9-0 whitewash.

“It was a better start but we felt it was a bit sloppy,” Woodward said of the game. “The key in those type of games is not to build bad habits and still make plays at full speed. I thought as the game wore on, guys started to bear down and get heavier on the puck.”

Rinaldi’s second of the game was an example of the speed the young Montreal native posses as he skated full tilt to a rolling puck just outside the circle and blasted a slap shot through Lindsay starter Blake Curran.

The Dukes forward then went sliding into the end boards and had to be helped off but was no worse for wear.

Wellington’s fourth goal was another thing of beauty as Eric Uba nearly blew a tire in his own end, dangled through a pair of Muskies, looked pass as he approached the Lindsay net on an odd-man rush and then beat Curran through the wickets.

Goals by defencemen Declan Carlile, Zach Uens and Mason Snell were followed by goals by Mitch Martan and Mitch Mendonca as the Dukes spread out the scoring.

Despite nine goals allowed, Curran kept this game from getting out of hand early with several ten bell saves and his work should be noted.

In the other net, Capriotti was steady and picked up his second shutout of the weekend and his fourth of the campaign.

While many of his 26 stops could have been made from a Barcalounger, there were a couple of sequences where the Mount Hope native was able to recover loose pucks laying in his feet in the crease after a rare flurry in the Wellington defensive zone.

“He’s on a role right now and we’ve been riding it,” Woodward said of Wellington’s goaltending.

“We’ve been very fortunate to have the depth we have at that position.”

Wellington will draw the visiting Newmarket Hurricanes on Friday and then make their second and final trip of the season into the Aurora Community Centre on Saturday night.

The sweaters will be available to be bid on during the game via silent auction.