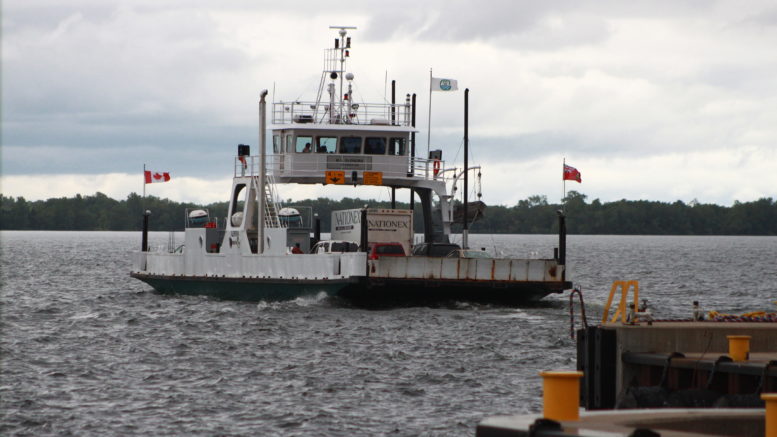 New vessels at nearby crossings may limits service disruptions at Glenora

Provincial funding for ferries in the region could have some spinoff benefit for Prince Edward County.

On Monday, the Ontario government announced it has awarded a $61-million contract to build two new, larger ferries to service Amherst Island and Wolfe Island. Kingston and the Islands MPP Sophie Kiwala, Kingston and the Islands MP Mark Gerretsen, and Hastings-Lennox and Addington MP Mike Bossio joined together at Kingston’s Wolfe Island Ferry Terminal to make the announcement.

The contract was awarded to Netherlands-based Damen Shipyards. The new Wolfe Island ferry will carry a maximum of 75 vehicles and up to 399 passengers. It’s a significant upgrade over the capacity of the Wolfe Islander III, which can carry 55 vehicles and 294 passengers. Amherst Island’s new ferry will carry up to 300 passengers and 40 vehicles, up from the current ferry’s capacity of 33.

Mayor Robert Quaiff said he believes the upgrades could be good news for Prince Edward County as well.

“If it does have an impact, it will be a good one,” Quaiff said. “What it means is that our ferries will stay in service.”

It’s anticipated the ferry currently serving Amherst Island will act as a backup to both Amherst Island and Wolfe Island. The new Kingston ferry will serve Wolfe Island along with the Wolf Islander III, the two ferries operating in tandem during busy summer months.

Back in the summer of 2015, that didn’t happen. The service’s MV Quinte Loyalist ferry was sent to serve Amherst Island, while the island’s Frontenac II vessel was sent to Kingston to stand in for the Wolfe Islander III, which was undergoing maintenance. That situation persisted through July and August, when the county sees an average of 40,000 cars per month utilize the ferry.

“We won’t have to do that anymore,” said Quaiff.

At that time Quaiff forwarded a letter to Minister of Transportation Steven Del Duca, indicating the importance of the service during the local tourist season. He said in the letter that limiting access to one of the county’s entry points likely would have reduced interest in visiting the municipality and could have resulted in a negative experience for those who did. Quaiff said Monday it looks as if that issue has been mitigated.

With the Ministry of Transportation planning a five-year, $80-million rehabilitation of the Skyway Bridge beginning in 2018, Quaiff said having two ferries in place at Glenora could help offset some of the traffic disruption.

“It will be an alternative, we’ll have a couple of ferries running all the time and they should be able to handle any excess or overflow,” he said.