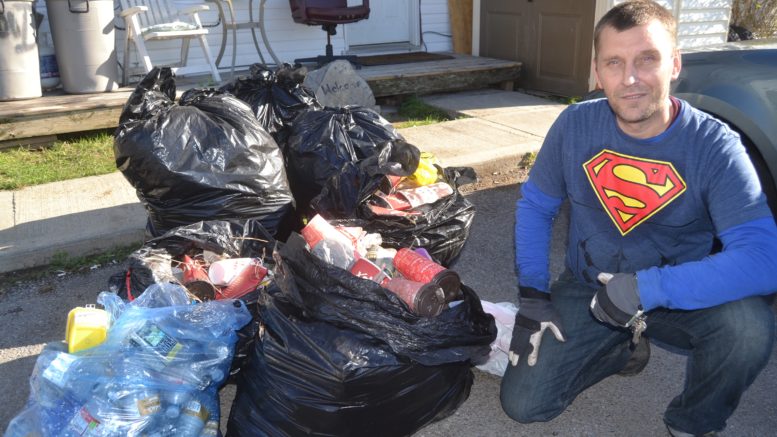 Donnie Duffy shows the four bags of garbage and a bag of recyclables he collected during a walk to Picton's Main Street from his home at Macaulay Village on Monday. (Jason Parks/PIcton Gazette)

Duffy has been collecting dirty needles for nearly 15 years

A Macaulay Village resident is doing more than his part to keep our community clean and safe.

And now the public can assist him in his efforts.

For the past four months, Donnie Duffy has been collecting garbage along roadways, parks and trails in Picton and the surrounding area, amassing more than 130 bags of refuse along Church Street (Army Camp Hill) as well as several bags from other areas where dumping commonly occurs.

In addition to the garbage collection, Duffy has been collecting dirty needles used by addicts in Prince Edward County for over a decade. He shuttles thousands of them to Kingston every two weeks.

Sophiasburgh resident Jan Cranney alerted the Gazette to Duffy’s efforts which have been chronicled through postings to social media websites.

Cranney said she has been so impressed that, on a voluntary basis, Duffy finds a piece of road or a trail or a park that needs cleaning up and with his own money and resources undertakes these tasks on behalf of the community.

“I just don’t think its right this man should dip into his own pocket to keep our community clean and safe of dirty needles,” Cranney said.

Duffy said he’s been collecting and picking up needles for nearly 15 years from both parks and roadsides as well as residences where addicts reside.

“I’ve been trying to get the message out there not to chuck them in the garbage. Don’t leave them in the parks. I’ll come and get them and the people who use, I’ve earned their trust,” Duffy said.

About four months ago Duffy was alerted to some needles that were discarded in a local park and went to collect them.,

When he arrived, he noticed the condition of the area.

“I just noticed that it was in really bad shape with garbage everywhere and something needed to be done,” he explained.

Using his own money for garbage bags and municipal bag tags, Duffy started collecting more than needles in an effort to make the Picton area not only safe but clean as well.

These exploits have created plenty of fans including Vicky Verner of the Prince Edward County Pet Food Bank and Picton councillor Lenny Epstein among others.

Verner will be collecting both donated garbage bags and tags at the food bank at the Hope Centre on Wednesdays from 12-3 p.m. while Epstein is creating donation boxes to collect tags and funds to assist Duffy’s efforts.

“I think what Donnie is doing is awesome,” Epstein said. “People that pitch in, see a need in the community and want to contribute in some way to make it better and keep it clean, it’s a great example for all of us.”

Finding dirty needles in areas where children are playing is a concern for all and Duffy has documented where and when he’s either made these potentially tragic discoveries or been alerted to them.

Epstein said it’s a situation that needs to be addressed in a number of different ways.

“Donnie’s helping with the stuff that’s on the ground afterwards but there’s a situation in this community where people are using needles to inject themselves,” Epstein said. “We don’t know how large this issue is compared to other communities but, regardless of the size, I think it’s something we need to work on to try and address and make sure people with addiction have access to the help they need.”

Duffy has even gone as far as to help connect Hastings-Prince Edward Public Health and Change Healthcare, an addictions organization with an office in Picton, to have a needle drop off so Duffy won’t have to drive to Kingston to the closest mass dirty needle receiving centre.

As there is no needle exchange locally and Prince Edward County is not immune to the perils of addiction, Epstein agreed that’s a positive development.

“There’s issues around this that we haven’t tackled around the council table this term but I think anything we can do to help people overcome their addictions or keep them as safe as possible. Is something that needs to be discussed. Injecting in parks and having someone clean up afterwards is not an answer,” Epstein said.

In addition to the above efforts, the Prince Edward Learning Centre in the Sobeys plaza will be collecting bags and tags Monday to Friday from 8:30 a.m. to 4 p.m.