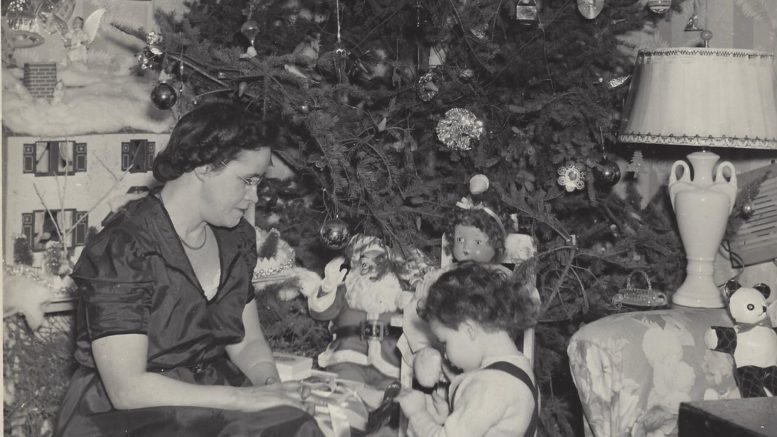 This Christmas scene from 1948 is representative of images that are being sought for the Wassail through the Centuries display. (Submitted photo)

Wassailers will have a chance to add some nostalgia to their celebrations this year.

Macaulay Heritage Park will be hosting Wassail through the Centuries — an event that promises to take visitors on a trip through time to Christmas celebrations of the past. The event takes place each Saturday of Wassail, Nov. 18, 25, and Dec. 2. Admission is by donation.

While Wassail festivities have been traditionally held at Macaulay House — the Victorian home of Rev. William Macaulay — this year’s events move to the Macaulay Church Museum at the site. A news release from the municipality says the event will feature displays depicting Christmas celebrations of the past, focusing on four distinct eras: 1780-90s, 1850-60s, 1940-50s, and 1960-70s.

Wassail through the Centuries is aligned with the annual Wassail festival organized by the Prince Edward County Winegrowers Association. Prince Edward County Museums head curator Jennifer Lyons says the event is another way residents can celebrate a year full of important milestones.

“Wassail and Christmas merrymaking go hand in hand,” Lyons says in the release. “And a time-travelling theme is a fun fit for a year of significant anniversaries with Canada 150 and Prince Edward County 225.”

Lyons and a team of volunteers will be gathering vintage photographs from the community that represent holiday celebrations from the mid-20th Century in order to form part of the display. They’ll be seeking both hardcopy and digital photographs.

Lyons says those whose family origins don’t rest in Prince Edward County are encouraged to participate as well.

“If your roots aren’t from the county, that’s great too — the purpose is to represent the various time periods and include as many people as possible in the nostalgia-making,” Lyons says.

Visitors to the museum during Wassail celebrations are encouraged to enjoy a complimentary cup of warm cider while they explore the exhibits, speak with an array of costumed characters, and check out some baked goods up for sale. Carols from local musicians are scheduled for 2 p.m. each day of the event.